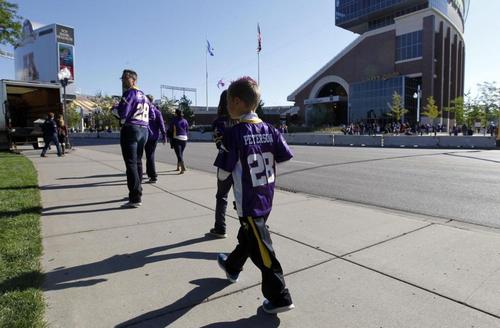 Many people are happy that the Minnesota Vikings kicked Adrian Peterson off the team and that Ray Rice can no longer play for the Baltimore Ravens. Their off-field violence has cascaded into harm and loss for everyone involved -- spouses, children, team, league and fans -- all because of the consequences of their childhood trauma. And the only way the NFL can stop further abuse, harm and loss is... well... to deal with its players' childhood trauma.

The severe and toxic stresses in Peterson's past -- or what we in the trauma-informed community count on a scale from one to 10 as adverse childhood experiences or ACEs -- aren't minor. As a child, he lost his father to prison, suffered through his parents' divorce, saw his brother killed by a drunk driver, and was beaten by his stepfather. Repeating the pattern, he whipped his own four-year-old son with a switch so harshly that he raised welts on the child's body. And if Peterson is convicted and goes to prison, his son can add another ACE to his trauma-filled life.

Peterson and Rice are two of millions of child and spouse abusers who love their families and can learn from their mistakes, if provided with help early enough. The average child abuser or spouse abuser isn't dirty, disheveled, reeking of alcohol or stoned on meth. Child and spouse abusers are corporate CEOs, ministers, priests, actors, business owners, teachers, truck drivers, physicians, nurses, basketball heroes, journalists, computer programmers, and your next-door neighbors.

They're dads and moms who have a hard time controlling their emotions when they're under stress because they themselves were abused. Nobody helped them when they were kids and nobody's helping them as adults.

Plain and simple, childhood trauma is the nation's No. 1 public health problem. The CDC's Adverse Childhood Experiences Study (ACE Study) -- the largest public health study you never heard of -- shows that childhood trauma is very, very common. (ACE surveys in 22 states echo the results.) And this childhood adversity causes violence, including family violence, as well as the adult onset of chronic disease and mental illness.

By learning about the science of childhood adversity, and following the lead of many other organizations that are becoming trauma-informed, the NFL could have players whose families are happier and healthier, it could have better players (more focused, less stressed), and it might never have to deal with a Ray Rice or Adrian Peterson situation again.

The NFL has 1,696 players. Of those 1,696 players, probably two-thirds -- 1,119 young men -- have experienced one type of serious childhood trauma. And it's likely that 22 percent -- about 370 players -- have suffered three or more types of adverse childhood experiences. And it's causing some of them to beat their girlfriends, spouses and kids.

This is based on the ACE Study's findings that about two-thirds of U.S. adults -- that's approximately 150 million people -- have experienced at least one of the 10 types of childhood trauma that were measured. These include five personal types -- physical, sexual and verbal abuse, and physical and emotional neglect. And five family dysfunctions: a family member in prison, depressed or mentally ill, or who abuses alcohol or other drugs; losing a parent to divorce or separation, and witnessing a mother being abused. Of course there are other types of childhood trauma, such as bullying, witnessing violence outside the home, and watching a sibling being abused, but the ACE Study measured only 10 types.

The effects of ACEs on family violence are especially troubling. Men who experienced physical abuse when they were kids -- that means a parent or other adult who often or very often pushed, grabbed, slapped, or threw something at them, or ever hit them so hard that they had marks or were injured -- are twice as likely to assault their spouses or girlfriends. (The ACE Study was done on 17,000 people, most of whom are white, middle- and upper-middle class, college educated, all with jobs and great health care.)

Men who experienced physical abuse, sexual abuse AND witnessed their mother being abused, are nearly four times more likely to batter women as those who didn't experience those traumas. Women who were physically abused, sexually abused and saw their mothers being abused are three-and-a-half times more likely to become victims of family violence. (Based on the ACE Study, 16% of men and 25% of women experienced sexual abuse before the age of 18.)

People who have high ACE scores, and haven't had much resilience in their past or haven't integrated resilience practices into their lives, don't handle additional stress well. Peterson grew up with the belief that he would not have made it to the NFL without regular beatings. But research clearly shows that children thrive in a supportive, caring environment, one without threats or punishment.

In his recent press conference, NFL Commissioner Roger Goodell said, "Domestic violence, including child abuse, sexual assault, irresponsible ownership or handling of firearms, the illegal use of alcohol or drugs -- these activities must be condemned and stopped, through education and discipline."

Education is a start, but it won't go the distance. (If education worked, everyone would be slim, nobody would smoke, and nobody would beat a kid or spouse.)

The many other organizations that have been successful in changing behavior start by simply not traumatizing already traumatized people. They move away from shaming, blaming and punishing, and instead intervene early with understanding, they nurture healthier behavior and they implement solution-oriented and resilience-building practices.

Using this approach, an alternative high school in Walla Walla, WA, that implemented trauma-informed practices saw its suspensions drop 90% and its expulsions plunge to zero while kids' grades, attendance and graduation rates went up. A program integrated into several family courts resulted in parents and caregivers changing their behavior so that 99 percent of infants and toddlers in the program suffered no further abuse.

First, the NFL could recognize that childhood trauma is an epidemic, that it affects most people in the U.S. That it's likely that the same percentage of NFL team members -- and staff -- have as many ACEs as the rest of the population.

And then, the NFL could implement approaches similar to other organizations that are trauma-informed:

So, how might this work in practice? Adrian Peterson, who beat his child with a switch until he was bloody and bruised,
was arrested in 2009 for driving 109 mph in a 55 mph zone.
Advertisement
In 2012, he was jailed for a night after he resisted arrest in a fight with police at a nightclub.

In 2009, a trauma-informed Vikings organization might have sat down with Peterson in 2009 and asked: "What happened to you? Were you angry about something?" rather than writing the incident off as a boys-will-be-boys event.

In 2012, they might have ramped up the intervention with more help plus a consequence, such as sitting out a game. If they had taken this approach and implemented all the practices above, Peterson might still be playing in this week's game. His photo might still be on the main billboard at the Vikings' stadium. He still might be a hero to kids.

Jane Stevens is writing a book about adverse childhood experiences and how organizations, agencies, states, communities and individuals are implementing trauma-informed practices.