When we talk about public health achievements, we often cite fewer people smoking, containing an outbreak like Ebola or MERS, and wearing our seatbelts. Over the last century, life expectancy increased by 30 years, and 25 of those years are attributable to these and other amazingly impactful public health interventions.

We are living longer and healthier lives than we would have ever thought possible one hundred years ago. The unsung heroes behind this achievement are the individuals in the public health workforce--the people who identify, manage, and execute the programs needed to improve population health. However, few people really seem to know who makes up the public health workforce or what these individuals do. 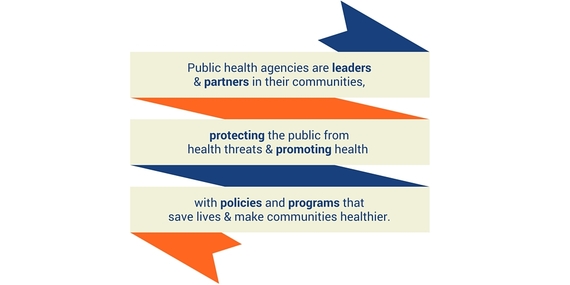 In the 1980s, a series of HHS reports and the 1988 Institute of Medicine report, The Future of Public Health, all reached similar a conclusion--that the data needed for effective, long term workforce planning and policy development were simply unavailable. Fifteen years later, the Institute of Medicine reiterated the need for data about the public health workforce in The Future of the Public's Health in the 21st Century.

Until now, we have had extremely limited information on important demographics, like diversity. Other than anecdotes, we had next to no data on the beliefs, attitudes, opinions, and experiences of individual public health workers. While we had copious lists of training needs, we didn't have a good sense of the workforce's prioritized training needs, which are especially critical in this transformational time in health and healthcare.

Today, governmental public health agencies face extraordinary challenges, from managing the implementation of the Affordable Care Act to adapting to the advent of big data and availability of electronic health records. We need data to ensure that we have the public health workforce that we need--one that is prepared not only for the problems of today, but for the challenges yet to come. The Public Health Workforce Interests and Needs Survey (PH WINS) does just that.

PH WINS provides crucial new information and nearly endless opportunity for analysis. The first 15 peer-reviewed articles discussing the survey's results are included in a supplement of the Journal of Public Health Management and Practice. To get a taste of what's available, let's start with four things you probably didn't know about the public health workforce before now.

1.
About 1 in 5 governmental public health workers plan to leave the workforce in the next year.

In the face of continued budget reductions, there is a real threat that we will see sustained staffing shortfalls in our state health departments or that these positions will not be filled at all. States have already experienced a 28 percent reduction in the number of public health workers per 100,000 people between 1980 and 2000. Only 1 in 4 vacant positions at state health agencies are currently being recruited for and filled. 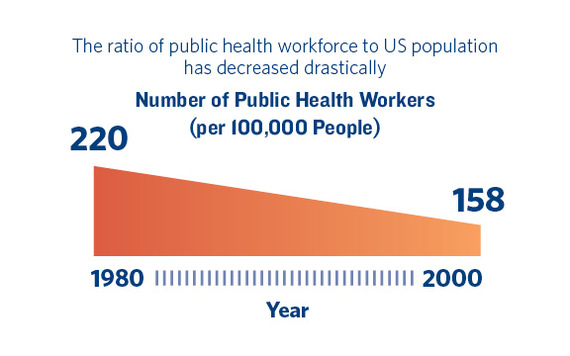 As the workforce shrinks, so does the number of workers available to inspect the restaurant where you might eat tonight, to prepare for the impact of natural disasters, and to investigate whether your co-worker has the seasonal flu or the start of a nationwide or worldwide pandemic.

This is not just a numbers game: it's also about quality. When we lose public health workers early and mid-career, we lose institutional knowledge and the chance to develop experienced managers and leaders. Even though it is challenging in the context of government employment, public health agencies need to prioritize improving both succession planning and strategies to identify and retain high-performing staff.

Most of the greatest public health achievements of the 20th century were the result of new regulations or policies that had an outsize impact over time, like fluoridating our water, mandating seatbelts, and improving access to family planning services.

Today, there is a renewed recognition that our health is defined by factors that are outside of the healthcare system but are affected by policy and regulatory decisions--housing and community safety, for example, or access to clean food, air, and water. Bans on trans fats, policies promoting indoor air quality, calorie counts on restaurant menus, and requirements to incorporate green space in new developments are all examples of how policy can be used to make health the default choice and why it is vital for the public health workforce to be able to use this strategy.

Three quarters of PH WINS respondents agree that it is important to have the skills to influence policy and understand the relationship between public health policy and public health problems, but one-third of that group reported either beginner-level ability or no ability at all in these areas. As training needs are considered in the context of strategies to improve population health, policy training should be considered a priority for the public health workforce.

3.
State health agency workers are satisfied with their jobs and their organizations, but not their pay. 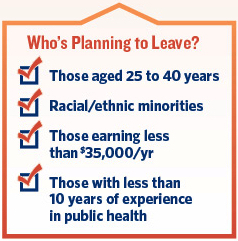 The bad news is that the same may not be true for new graduates deciding whether to enter public health. Public health is one of the most popular undergraduate degrees in the United States, which holds promise for the future of the workforce. However, given the cost of college and graduate education and the student debt crisis, perceived salary dissatisfaction among the governmental public health workforce may prove to be a recruitment barrier.

4.
Women dominate the workforce, but not the pay.

Despite the fact that nearly three in every four public health workers are women, women earn an average of 90 to 95 cents on the dollar compared with men after adjusting for other factors. This gap is considerably greater for supervisory roles.

The pay gap pales in comparison to those reported in other sectors of government or the private sector. However, the advantage enjoyed by men--which is also seen in the woman-dominated field of nursing--remains puzzling.

Brian Castrucci is the Chief Program and Strategy Officer at the de Beaumont Foundation, where he was one of the original architects of the PH WINS project. Prior to joining the Foundation, Brian spent a decade working in state and local health departments. Brian is currently pursuing his doctorate in public health leadership at the University of North Carolina at Chapel Hill Gillings School of Global Public Health.