The Fourmile Canyon fire was a very personal and emotional event for many of us in Boulder. I knew it was no ordinary fire by about noon that Labor Day Monday, Sept. 6, when, sitting at my desk in northwest Boulder, just across the street from where the Rocky Mountains begin, I saw the sky darken and I began to smell smoke. Within minutes, the sky above was gray, and to the west the color was more like black.

I've lived through several major brushfires that have threatened our neighborhood, and I've watched by night the lines of red and yellow fire marching down hillsides toward town pausing occasionally to light up pine trees into bright-burning torches. But this one was different because it's the first time that I've seen, for hours, flecks of white ash falling down on us like snowflakes. 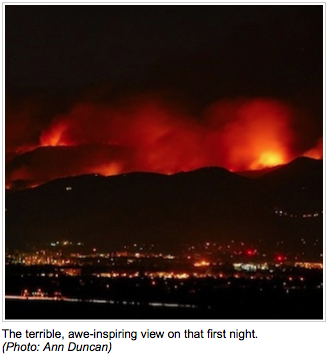 The wind howled on Monday. I knew that, in that wind, the fire would have the upper hand up there, maybe be unchallenged. That Monday night, some people drove up Flagstaff Mountain and stood on an overlook where they could see an amazing widescreen panorama of nothing but fire to their north. I didn't think to go up there.

And I knew this one was different when a friend e-mailed me Tuesday morning about some pending business and wrote the eerily matter-of-fact words: "Left my notes up at our house which burned down." They had designed and built their house on Melvina Hill (for some reason, out of respect I guess, I'd even like you to know that it's pronounced mel-VINE-uh), which is up above a tiny town where I'd once lived, Wallstreet (with names like Fourmile and Wallstreet, it appears the old-time miners had a penchant for combining words). I felt pain for my friend, and was invaded by memories of Wallstreet. I had lived there in the 1970s, with my red-headed girlfriend Vicky and our red-haired Irish setter. Those had been glorious youthful months there, drinking (foolishly) water from Fourmile Creek, skating and playing hockey on a frozen pond, with a few dozen "counter-culture advocates" as neighbors. Like many a mountain town, Wallstreet had once been much more populous in times when men had plundered for gold, silver and tungsten until it was all played out.

Back to the present now. My friend who lost her house had named her daughter Melvina, in honor of their hillside.

People were shocked and scared

Tuesday morning was scary because the TV stations were showing images of the entire landscape west of Boulder covered with a low-lying blanket of clouds due to a temperature inversion. They said this meant the slurry planes couldn't fly, and I knew that was bad. In town, firefighters were arriving from around Colorado, soon to be joined by the crack firefighters who come from quite far away. Thick, heavy smoke continued to hang over Boulder, and people were quite shocked and scared.

Late Wednesday was the turning point. I went down to the Justice Center in the late afternoon to hear the press briefing in a big parking lot where big satellite trucks pointed their big dishes upward. There were fewer homeless mountain residents there for that briefing, because they were due for their own mass meeting up on the university campus. The skies were gray, but, appraising them, I left my umbrella in the car. As we stood in the parking lot waiting for the spokespeople to talk, something wonderful happened: it started to rain, first a few drops and by the end of the briefing quite a hard rain. Looking west, I saw dark clouds over the mountains and surmised, correctly as it turned out, that it would be raining pretty hard up there, too. I wrote a hopeful post on The Boulder Reporter, proclaiming that the fire would be winding down.

We had one more scare Thursday -- too much of a scare, in my opinion. Someone convinced the City of Boulder to warn residents in the west side of town that high winds were coming, and that they may have to evacuate that night. A friend said they'd heard from a friend in Cheyenne that the winds were 50 miles per hour up there and heading our way. As I walked in the foothills at 6 p.m., big, red, Soviet-looking helicopters flew low overhead one after another, a long hose hanging off of each like an elephant's trunk. Each one went down to suck up water from Wonderland Lake to the north, then disappeared over Sanitas ridge to dump it on the fire line, which still was a good two miles from town. I could tell they were taking the high wind warnings seriously and trying to dampen down the biggest threat to the us.

Then that evening as I walked out of a meeting down in south Boulder at the National Center for Atmospheric Research shortly after 10, a ferocious wind was howling out of the west and I was very worried. My wife, back home, was putting photos and passports and the like into her car. (That afternoon, one of my neighbors said she'd been been taking videos of their possessions and debating whether to rent a U-Haul, and I heard similar stories later from other people).

Then, as I drove north toward home, the wind died. I'm no meteorologist, but it seemed that the front from the north had come roaring in and, once it arrived, the wind died. This was of course a blessing, but I've wondered ever since why the crack meteorologists who convinced the City to scare everyone couldn't see on their charts that the wind would blow the front in, then die. In any case, I got home to find the wind gone and my wife still afraid, but willing to be comforted.

By Thursday and Friday, the big news for me was the news coverage. It was quite obvious by then that the fire was petering out. Yet the national news, and even the Denver TV, spoke of "40 percent containment." That sounds scary, and we and our friends spent the day receiving calls and e-mails from freaked-out friends and relatives who had heard news accounts. Yet by then, the sky and the air were free of smoke. This strange credibility gap persisted into Saturday, when my brother called from Boston excitedly quoting the "50 percent contained" he'd heard and I had to tell him the fire was all over but for some inevitable dousing of hotspots.

Here in Colorado we're given to reminding each other, as hikers or campers, that "the mountains don't care." The danger is often lurking around. This is true in spades when a fire gets going in steep canyons, in high winds. On that fearful Monday day and evening, those of us who've lived here a while knew that the fire and the mountains were in charge, that they would go where they would go.

The fire had erupted from a little side road between Wallstreet and the even-tinier town of Sunset to Wallstreet's west. It raged through Wallstreet, then uphill onto Melvina Hill and farther uphill to the edge of Gold Hill, a mountain town of iconic charm to Boulderites and anyone who've seen it. But it did its most painful damage of all to beautiful Sunshine Canyon -- beautiful, in particular, because it's not really a canyon so much as a scenic road over mountains meadows, with houses that had (alas) wonderful views, unlike houses in real canyons that tend to look out at steep canyon walls. Sunshine Canyon was devastated west of Bald Mountain -- big, expensive houses, many of them.

I felt a special pain about Bald Mountain. There's a small county park that hardly anyone visits but where I've hiked several times a week for a few years now; it had become quite an addiction, but a very healing one -- a place where, for 10 minutes of walking, you are rewarded with great views of Denver, Flagstaff and the Flatirons to the east and the Continental Divide to the west. I know that, when I'm allowed to go back there, the view to the west will be of black, charred ground and black, burned-out skeletons of trees.

And then there's the big house on the hilltop a quarter-mile north of Bald Mountain -- the second of two mountain homes I've lived in, also way back when, house-sitting in a large, modern house with my ex-yoga teacher, a house where on some winter nights we would stare at the picture windows as the wind howled and watch the glass moving and bending in a way you don't think glass can move and bend.

That house was, I now believe, spared. Just barely. Soon, when the sheriff's people open the road, I'll go up the canyon to find out for sure. And, from Bald Mountain, I'll look out at that terrible blackened landscape to the west.