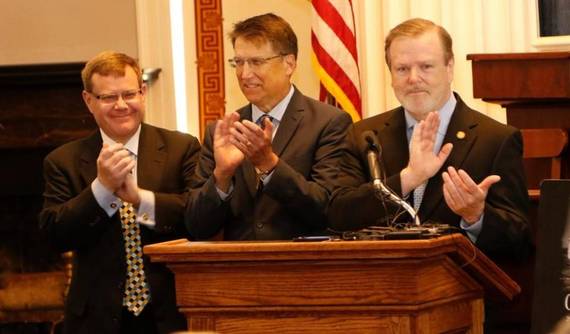 The bill's "almost surgical precision" (the Court's words) in disenfranchising black voters should shock everyone's conscience regardless of party affiliation. There is also more here that should shock the conscience. Eerily like McCrory's HB2, the legislation was rushed through the legislature and the stricken provisions involve much more than the touted purpose of the law (voter i.d. here and transgender bathroom use in HB2). Also eerily like HB2, the problem purporting to be solved isn't really solved at all. As the Court discusses, the voter i.d. provisions leave holes in absentee voting (which is used more by whites) and also accept yet reject the very same forms of identification.

Though highlights of the opinion are no substitute for reading the entire opinion, I realize not everyone will have time to read the entire opinion. I also realize that politicians like Pat McCrory are again betting everything that voters won't take the time to read what has really happened here. I therefore have excerpted below some of the important language from the opinion and have done so in the order the language appears in the opinion. I have omitted or shortened internal citations and have bolded certain provisions that seemed particularly important to me. Although this is no substitute for reading the opinion in full, here goes:

In holding that the legislature did not enact the challenged provisions with discriminatory intent, the [district court below] seems to have missed the forest in carefully surveying the many trees. This failure of perspective led the court to ignore critical facts bearing on legislative intent, including the inextricable link between race and politics in North Carolina.

After years of preclearance and expansion of voting access, by 2013 African American registration and turnout rates had finally reached near-parity with white registration and turnout rates. African Americans were poised to act as a major electoral force. But, on the day after the Supreme Court issued Shelby County v. Holder, 133 S. Ct. 2612 (2013), eliminating preclearance obligations, a leader of the party that newly dominated the legislature (and the party that rarely enjoyed African American support) announced an intention to enact what he characterized as an "omnibus" election law. Before enacting that law, the legislature requested data on the use, by race, of a number of voting practices. Upon receipt of the race data, the General Assembly enacted legislation that restricted voting and registration in five different ways, all of which disproportionately affected African Americans.

Although the new provisions target African Americans with almost surgical precision, they constitute inapt remedies for the problems assertedly justifying them and, in fact, impose cures for problems that did not exist. Thus the asserted justifications cannot and do not conceal the State's true motivation.

In particular, between 2000 and 2012, when the law provided for the voting mechanisms at issue here and did not require photo ID, African American voter registration swelled by 51.1%. (compared to an increase of 15.8% for white voters). African American turnout similarly surged, from 41.9% in 2000 to 71.5% in 2008 and 68.5% in 2012. Not coincidentally, during this period North Carolina emerged as a swing state in national elections.

In this one statute, the North Carolina legislature imposed a number of voting restrictions. The law required in-person voters to show certain photo IDs, beginning in 2016, which African Americans disproportionately lacked, and eliminated or reduced registration and voting access tools that African Americans disproportionately used. Moreover, as the district court found, prior to enactment of SL 2013-381, the legislature requested and received racial data as to usage of the practices changed by the proposed law.

This data showed that African Americans disproportionately lacked the most common kind of photo ID, those issued by the Department of Motor Vehicles (DMV). The pre-Shelby County version of SL 2013-381 provided that all government-issued IDs, even many that had been expired, would satisfy the requirement as an alternative to DMV-issued photo IDs. After Shelby County, with race data in hand, the legislature amended the bill to exclude many of the alternative photo IDs used by African Americans. As amended, the bill retained only the kinds of IDs that white North Carolinians were more likely to possess.

The district court found that the racial data revealed that African Americans disproportionately voted provisionally. In fact, the General Assembly that had originally enacted the out-of-precinct voting legislation had specifically found that "of those registered voters who happened to vote provisional ballots outside their resident precincts" in 2004, "a disproportionately high percentage were African American." With SL 2013-381, the General Assembly altogether eliminated out-of-precinct voting.

We hold that the challenged provisions of SL 2013-381 were enacted with racially discriminatory intent in violation of the Equal Protection Clause of the Fourteenth Amendment and § 2 of the Voting Rights Act.

Using race as a proxy for party may be an effective way to win an election. But intentionally targeting a particular race's access to the franchise because its members vote for a particular party, in a predictable manner, constitutes discriminatory purpose. This is so even absent any evidence of race-based hatred and despite the obvious political dynamics. A state legislature acting on such a motivation engages in intentional racial discrimination in violation of the Fourteenth Amendment and the Voting Rights Act.

The record is replete with evidence of instances since the 1980s in which the North Carolina legislature has attempted to suppress and dilute the voting rights of African Americans.

And only a few months ago (just weeks before the district court issued its opinion in the case at hand), a three-judge court addressed a redistricting plan adopted by the same General Assembly that enacted SL 2013-381. Harris v. McCrory (M.D.N.C. Feb. 5, 2016). The court held that race was the predominant motive in drawing two congressional districts, in violation of the Equal Protection Clause.

As one of the State's experts conceded, "in North Carolina, African-American race is a better predictor for voting Democratic than party registration."

As "evidence of justifications" for the changes to early voting, the State offered purported inconsistencies in voting hours across counties, including the fact that only some counties had decided to offer Sunday voting. The State then elaborated on its justification, explaining that "[c]ounties with Sunday voting in 2014 were disproportionately black" and "disproportionately Democratic." In response, SL 2013-381 did away with one of the two days of Sunday voting. Thus, in what comes as close to a smoking gun as we are likely to see in modern times, the State's very justification for a challenged statute hinges explicitly on race -- specifically its concern that African Americans, who had overwhelmingly voted for Democrats, had too much access to the franchise.

The record shows that, immediately after Shelby County, the General Assembly vastly expanded an earlier photo ID bill and rushed through the legislative process the most restrictive voting legislation seen in North Carolina since enactment of the Voting Rights Act of 1965. The district court erred in refusing to draw the obvious inference that this sequence of events signals discriminatory intent.

This hurried pace, of course, strongly suggests an attempt to avoid in-depth scrutiny. Indeed, neither this legislature -- nor, as far as we can tell, any other legislature in the Country -- has ever done so much, so fast, to restrict access to the franchise.

Instead, this sequence of events -- the General Assembly's eagerness to, at the historic moment of Shelby County's issuance, rush through the legislative process the most restrictive voting law North Carolina has seen since the era of Jim Crow -- bespeaks a certain purpose. Although this factor, as with the other Arlington Heights factors, is not dispositive on its own, it provides another compelling piece of the puzzle of the General Assembly's motivation.

In sum, relying on this racial data, the General Assembly enacted legislation restricting all -- and only -- practices disproportionately used by African Americans.

Registration and voting tools may be a simple "preference" for many white North Carolinians, but for many African Americans, they are a necessity.

Any individual piece of evidence can seem innocuous when viewed alone, but gains an entirely different meaning when considered in context.

Our conclusion does not mean, and we do not suggest, that any member of the General Assembly harbored racial hatred or animosity toward any minority group. But the totality of the circumstances -- North Carolina's history of voting discrimination; the surge in African American voting; the legislature's knowledge that African Americans voting translated into support for one party; and the swift elimination of the tools African Americans had used to vote and imposition of a new barrier at the first opportunity to do so -- cumulatively and unmistakably reveal that the General Assembly used SL 2013-381 to entrench itself. It did so by targeting voters who, based on race, were unlikely to vote for the majority party. Even if done for partisan ends, that constituted racial discrimination.

The photo ID requirement is also too broad, enacting seemingly irrational restrictions unrelated to the goal of combating fraud. This overbreadth is most stark in the General Assembly's decision to exclude as acceptable identification all forms of state-issued ID disproportionately held by African Americans. The State has offered little evidence justifying these exclusions. Review of the record further undermines the contention that the exclusions are tied to concerns of voter fraud. This is so because voters who lack qualifying ID under SL 2013-381 may apply for a free voter card using two of the very same forms of ID excluded by the law. Thus, forms of state-issued IDs the General Assembly deemed insufficient to prove a voter's identity on Election Day are sufficient if shown during a separate process to a separate state official. In this way, SL 2013-381 elevates form over function, creating hoops through which certain citizens must jump with little discernable gain in deterrence of voter fraud.

In sum, the array of electoral "reforms" the General Assembly pursued in SL 2013-381 were not tailored to achieve its purported justifications, a number of which were in all events insubstantial. In many ways, the challenged provisions in SL 2013-381 constitute solutions in search of a problem. The only clear factor linking these various "reforms" is their impact on African American voters. The record thus makes obvious that the "problem" the majority in the General Assembly sought to remedy was emerging support for the minority party. Identifying and restricting the ways African Americans vote was an easy and effective way to do so. We therefore must conclude that race constituted a but-for cause of SL 2013-381, in violation of the Constitutional and statutory prohibitions on intentional discrimination.

We therefore reverse the judgment of the district court. We remand the case for entry of an order implementation of SL 2013-381's photo ID requirement and changes to early voting, same-day registration, out-of-precinct voting, and preregistration.