This summer, superheroes defended humanity in The Avengers, and a special agent traveled through time in Men in Black 3 to stop an assassination by an alien. Computer-generated images fill such summer blockbusters, enabling us to witness scenes previously conjured only in the minds of the writer and director.

Viewing ideas through the lens of mathematics also enables us to examine the unseen. In fact, a new film Sphereland, available on DVD, takes a viewer through a fantasy tale exploring what we can only imagine -- the 4th dimension. To see how one might gain insight into such a higher dimensional space, let's examine the relationship between the 2nd and 3rd dimensions to gain perspective on moving from the 3rd to the 4th. Let's begin by considering my self-portrait. 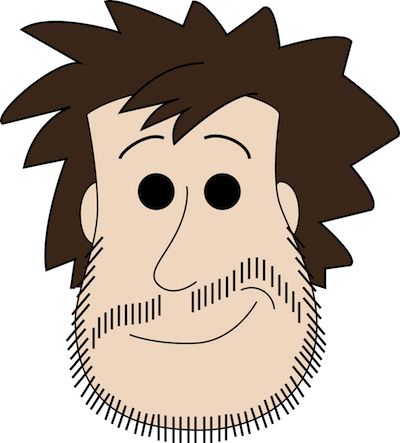 What if I lived in the 2D world of your screen? If I looked like this cartoon, I would have very limited vision since my eyes couldn't see beyond the edges of my face. Any line in two dimensions is analogous to a wall in our three dimensional world.

Let's get even simpler with the drawing below. The pupils of this 2D blockhead could only see as far as the edges that outline its eyes. 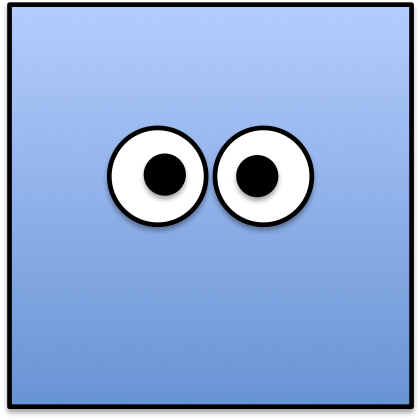 What cartoon might lead to a happier existence in such a two dimensional world? How about the picture below? 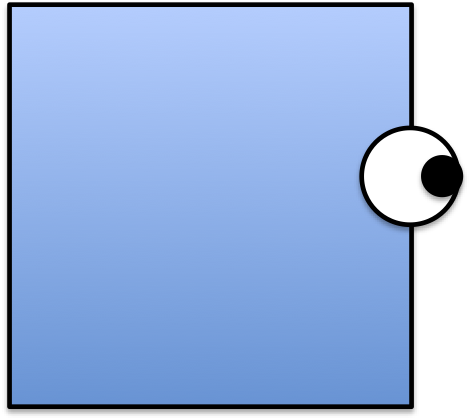 Now, our square friend can see the world and appreciate the words on this page and the beauty within your digital screen. Think about your place within this 2D world. You could put your nose centimeters from your screen and, so long as you didn't punch through the screen directly in front of the Mr. Square's eyeball, our flat friend wouldn't know you were there.

What if our blue cartoon still lived in two dimensions but his world, rather than being flat, was curved like the surface of a sphere? He could, much like those in the time of Christopher Columbus, think his world was flat. In such a two-dimensional universe, the world could seem flat, when it actually had curvature in the third dimension where you and I live. We three-dimensional human beings only fully appreciate the curvature of our world when we leave the two-dimensional surface of our planet and view it from outer space -- something that the two-dimensional blockhead cannot do.

In a similar way, could our three dimensional universe be curved in a fourth dimension? Could this even be detected in our third dimension? Could someone from a 4th dimension be quite close to us in our 3D universe? What would happen if a 4D being intersected part of itself with our universe? We cannot fully answer such questions. Yet, the film Sphereland takes a viewer through a tale that delves into such inquiries.

The movie is a sequel to Flatland: The Movie and is based on Edwin A. Abbot's Flatland and Dionys Burger's Sphereland. In Flatland: the Movie, Arthur Square, played by Martin Sheen, and his curious granddaughter Hex, played by Kristen Bell, meet Spherius, played by Michael York, from Spaceland. Arthur and Hex face grave danger and confront the third dimension.

The movie Sphereland is set on the eve of this 2D world embarking on its first mission into their "outer-space." A key discovery in the film results from the angles of a triangle. If you draw a triangle on a piece of paper, the sum of its angles is 180 degrees. How then, could Puncto, played by Danny Pudi, have measured a triangle in Flatland's outer space with angle sums greater than 180 degrees? Such mysterious triangles can exist, which the space explorers discover as they contemplate the third, fourth and even higher dimensions. 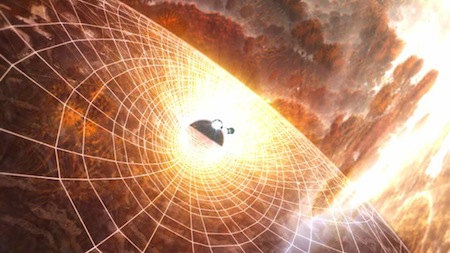 Sphereland offers insights into the 4th dimension by examining how its 2D characters might experience life in the third. Admittedly, such ideas are difficult to comprehend.

Could the shape of our universe be curving in some higher dimension? Could someone in a fourth dimension be present, like you, dear reader, could be to our blockhead, without being visible in our three dimensional world? What would a four-dimensional sphere look like were it to intersect our world? Youth and adults alike can gain insights through the educational and entertaining film Sphereland. And maybe, someday, an astronomer or physicist will discover mysterious measurements that, upon reflection, give insight on the shape of our universe. The answers may, as they do in Sphereland, lie in the stars and in space exploration.