A hacking group has broken into a Fox site and stolen the passwords for hundreds of Fox employees, as well as the Twitter account of a Fox television affiliate.

The group, called Lulz Security, then posted the Fox.com passwords online, and altered the LinkedIn accounts of several employees. (LinkedIn has since deleted the accounts.) LulzSec also linked to the altered accounts on Twitter.

Moreover, the group took over the Twitter account of Fox affiliate Fox15, and began posting tweets such as this one: 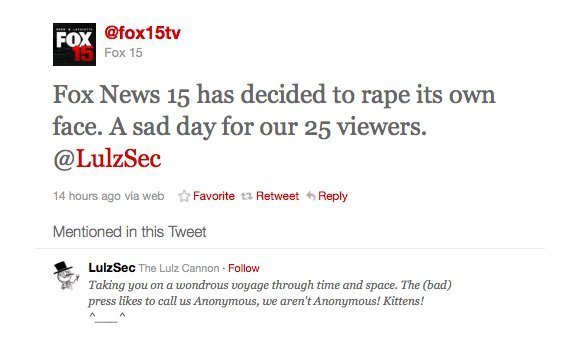 In a statement, Lulz Security wrote, "We invite the Internet to ravage the following list of emails and passwords (from a database within Fox.com) - Facebook, MySpace, PayPal, whatever you can get your hands on. Take from them everything. Remember to proxy up, or tunnel like a pro!"

The group also claimed to have exposed the personal information of contestants from "The X Factor."