A massive manhunt for three suspects in northern Illinois is underway after a Fox Lake police officer was shot and killed early Tuesday.

The suspects are considered armed and dangerous, according to police.

The slain officer was identified Tuesday afternoon as Charles Joseph Gliniewicz, a 32-year veteran of the force. Gliniewicz, who went by the nickname "G.I. Joe," was married with four children, the Chicago Tribune reports, citing a police source and family.

Canine units, choppers and a "large number" of officers on foot have been deployed near where Gliniewicz died, roughly 50 miles north of Chicago, Lake County spokesman Detective Chris Covelli said during a morning news conference. Area SWAT teams and the U.S. marshals have also joined the search.

Lake County Undersheriff Raymond Rose told the Tribune that Gliniewicz died at the scene and had been stripped of his gun.

"At this point, this is a two-pronged investigation. We're looking into the apprehension of the three suspects at large," Covelli said. "In connection with that, we're working the investigation on the officer who was injured. Lake County Major Crimes Task Force is heading up that investigation."

Gliniewicz contacted the police department via radio around 8 a.m. to say he was on foot and pursuing three suspicious subjects, Covelli said. Contact was lost shortly thereafter. When backup arrived on the scene, Covelli said they discovered the downed officer had suffered a gunshot wound.

During a press conference, Fox Lake Mayor Donny Schmit said the town not only lost an officer, but that he personally had "lost a very good friend."
“G.I. Joe was a father of four boys, a decorated police officer and a devoted member of this community,” an emotional Schmit said.

The area surrounding the shooting, near U.S. Route 12 and Sayton Road, is a mix of wooded, marshy land and industrial space. Police have blocked off several main thoroughfares east of the shooting area, and some local businesses were closed earlier on Tuesday, area publication the Daily Herald reports.

Schmit also noted that students in area schools that were put on lockdown earlier in the day were dismissed at 4 p.m. and that parents were asked to pick up their children from school.

Police asked area residents on Tuesday morning to stay in their homes and to report any suspicious people or activity.

PHOTO GALLERY
Scenes From The Northern Illinois Manhunt
Download
Calling all HuffPost superfans!
Sign up for membership to become a founding member and help shape HuffPost's next chapter
Join HuffPost 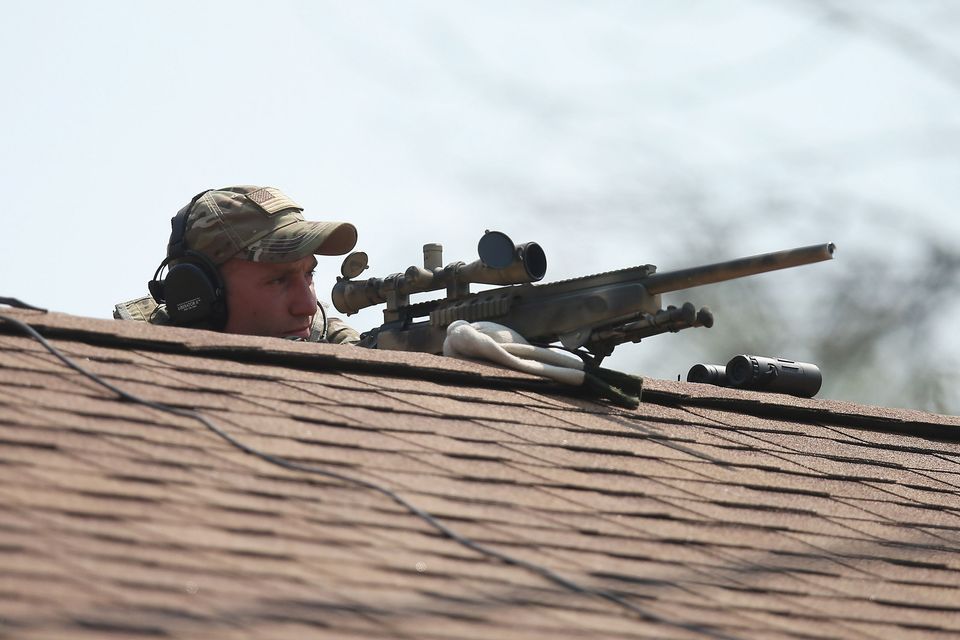 1 / 8
FOX LAKE, IL - SEPTEMBER 01: A police officer searches an area for suspects involved in shooting an officer September 1, 2015 in Fox Lake, Illinois. A manhunt for three suspects is underway after an officer from Fox Lake Police was shot and killed this morning. (Photo by Scott Olson/Getty Images)
Scott Olson via Getty Images