Fox News host Bob Beckel had no idea he was back on air when he screamed the f-word Monday night.

Beckel, who co-hosts "The Five" on weekdays, was a guest on Sean Hannity's Fox News show. During a commercial break, Beckel was in a heated discussion with fellow panelist Jennifer Stefano. As the show returned from break, Beckel yelled to Stefano, "You don't know what the f--k you're talking about!"

"Whoa! Bleep! What are you doing?" Hannity asked. "I just can't stand right-wingers running their mouths all the time," Beckel said. As Hannity apologized to viewers at home, Beckel insistsed, "I don't apologize!"

"Yes you do!" Hannity pressed. "You just cursed on the air!"

When Beckel still refused to apologize, Hannity apologized for him. "We're not on the air," Beckel said. "Yeah we were on the air," Hannity pressed.

When Beckel finally realized he was on air then and before when he cursed, he apologized for using "that foul word." He told Hannity that he should run his show better, instead of "having [Beckel] get caught like that."

"Now you're blaming me for this! You're like Obama!" Hannity responded.

This is not the first time Beckel has cursed on air. He let everyone's favorite, four-letter s-word slip back in September 2011, during a heated discussion about then-GOP candidate Herman Cain. He dropped the same word earlier that month during a discussion on tax cuts. He also admitted to "sort-of" dropping the f-bomb in July 2011.

PHOTO GALLERY
Gaffes In The Media 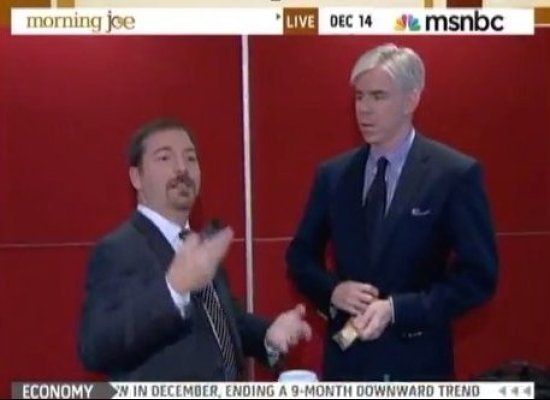