Since Salon's Alex Koppelman caught Fox News characterizing Michelle Obama as "Obama's Baby Mama," there's been an uproar over use of such an offensive term.

"A producer on the program exercised poor judgment in using this chyron during the segment," said Fox's Senior Vice President of Programming Bill Shine, in a statement to Politico.

---- ORIGINAL REPORT: As if implicating her as one half of a "terrorist fist jab" wasn't enough, Fox News has gone on to label Michelle Obama "Obama's baby mama."

An alert reader wrote in just a little while ago to let us know about something he'd spotted on Fox News Wednesday afternoon. During a segment discussing conservative attacks against Michelle Obama, the wife of presumptive Democratic nominee Barack Obama, the network described the former as "Obama's baby mama."

I checked, and sure enough, as you can see below, our e-mailer was right. In fact, that description was displayed on screen several times during the segment, which featured anchor Megyn Kelly and conservative blogger Michelle Malkin, an FNC contributor.

Koppelman has the video here, and you can see the stills below. 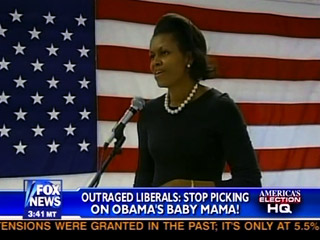 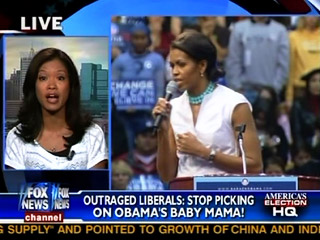 To be fair, Michelle Obama referred to Barack as her "baby's daddy" on the night he won his Senate seat in 2004.