In what can only be viewed as taking "fair and balanced reporting" to new lows, Fox News featured an image of a "traditional" couple on its article bashing feminism and a woman's right to independence. 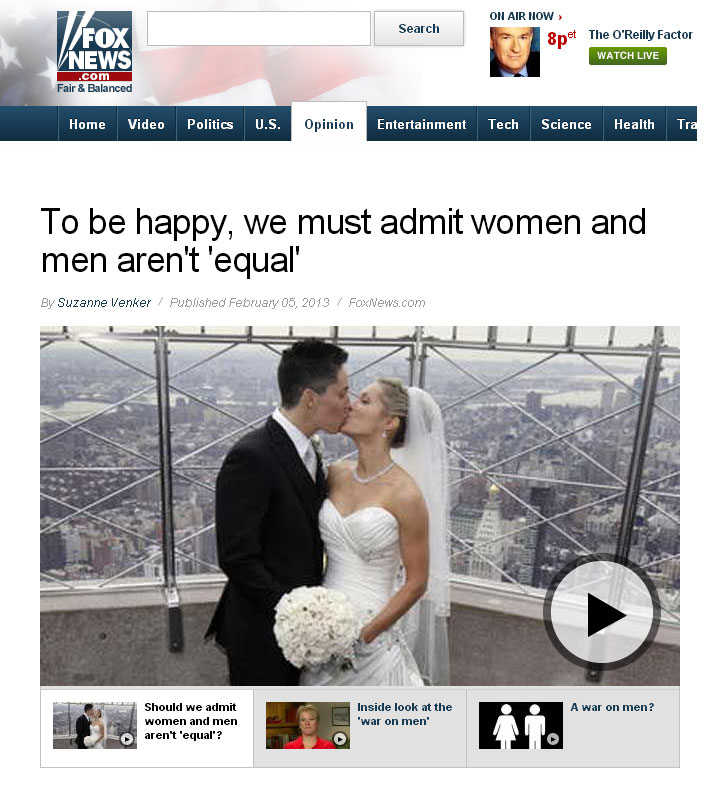 What's unique about that? After all, doesn't Fox often put forth some draconian opinions on just about everything under the sun? The catch is that the image writer Suzanne Venker used to illustrate her story is of two women.

It was right here in fact, on Huffington Post, that the image was first published. In a piece this time last year celebrating the diversity of couples on Valentine's Day, the photo is of lesbian couple Lela Mc Arthur and Stephanie Figarelle of Anchorage, Alaska on their wedding day. They were the first same-sex couple to tie the knot at the top of the Empire State Building after New York State legalized gay marriage, 21st-centurizing that famous scene from Sleepless in Seattle. Self-identified feminist and author Jessica Valenti pointed out the humorous error on Tumblr.

The article, which is a model of 1950s misogyny, claims that "young women have an added burden: they've been raised in a society that eschews marriage. They've been taught instead to honor sex, singlehood and female empowerment."

"It's time to say what no one else will," Venker's article continues. "Feminism didn't result in equality between the sexes -- it resulted in mass confusion. Today, men and women have no idea who's supposed to do what."

I can't speak for straight women, but I can vouch for at least some of us dykes that the only thing we're confused about is who let this outmoded thinking out of the closet?

Or I could be wrong. Maybe Fox woke up and realized that featuring a lesbian couple as a traditional model of marriage is the new normal. Or maybe someone needs to read the captions on images before they hit the publish button.

Either way, it's a mistake worthy of a big, gay laugh.

Writer, PR specialist and native New Yorker who favors humor over sadness, travel over television, and coffee over sleep.