Fox News helped turn a bogus story about subpoenas sent to a handful of Houston pastors into a national rallying cry for religious liberty. Now the network is helping promote an event that will pit some of the country's most extreme anti-LGBT voices against the city's nondiscrimination ordinance.

In May, the city of Houston made history by enacting the Houston Equal Rights Ordinance (HERO), a measure that prohibits discrimination in housing, employment, and public accommodations on the basis of race, gender, sexual orientation, gender identity, and several other categories. The ordinance was championed by the city's first openly gay mayor, Democrat Annise Parker.

Opponents of HERO -- led by the Houston Area Pastor Council -- responded by launching an effort to put a repeal of the ordinance on the ballot in November. Their campaign peddled the myth that HERO would allow men and sexual predators to enter women's restrooms -- a myth that was widely circulated by local media. Though opponents submitted the required number of signatures to put the repeal on the ballot, City Attorney Dave Feldman determined that many of the signatures were collected improperly, and the city announced that not enough valid signatures had been collected.

Opponents quickly filed a lawsuit to have the signatures reviewed, prompting the city to respond by issuing subpoenas to five local pastors for a broad range of documents -- including sermons and personal communications -- related to their opposition to HERO.

On October 14, Fox News reporter and serial misinformer Todd Starnes broke the news of the subpoenas, misleadingly characterizing them as an "attempt to deconstruct religious liberty" and describing HERO as a "bathroom bill." Starnes' report relied heavily on spin from the Alliance Defending Freedom (ADF), the extreme right-wing legal group representing the pastors in their effort to quash the subpoenas. ADF attorney Christina Holcomb called the subpoenas "an inquisition designed to stifle any critique of [the city's] actions."

Before long, Starnes' report made the jump to Fox News' airwaves. On October 15, Starnes appeared on The Kelly File to discuss the story, describing HERO as a measure that would let "men who identify as women" to use women's restrooms:

Starnes' appearance was followed by a barrage of misleading segments about the story, all of which depicted the subpoenas as an attack on religious liberty. Multiple Fox personalities incorrectly described the subpoenas as part of the enforcement of HERO, suggesting that the ordinance might criminalize anti-gay speech. Others repeated Starnes' lie that HERO would allow men to use women's restrooms. By the end of the week, in just three days of coverage, Fox had spent nearly thirty minutes of airtime peddling its Houston horror story*.

Fox's panicked coverage was grossly misleading and left out crucial details about the anti-HERO lawsuit. But it worked perfectly as a right-wing horror story about Christians being victimized by a city's attempt to protect LGBT people.

Soon, Houston had become -- as one Fox anchor put it -- "ground zero for religious liberty." Conservative media outlets quickly regurgitated the victimization spin from Starnes and ADF. Conservative groups -- led by the notorious anti-gay hate group the Family Research Council (FRC) -- began organizing "I Stand Sunday," a November 2 rally in Houston to support the pastors who had been "unduly intimidated by the city's Mayor."

In a press conference on October 15, Parker clarified that she had not seen the subpoenas before they were filed, explaining that they were drafted by outside counsel. She also agreed that the language of the subpoenas -- which asked for any materials relating to the pastors' teaching on homosexuality and gender identity -- was overly broad. Days later, the city narrowed the scope of the subpoenas to only materials directly related to the anti-HERO effort.

But it was too late to stop the tidal wave of conservative outrage birthed by Fox's misleading coverage. Starnes immediately decried the amended subpoenas. During the October 20 edition of his Fox News program, long-time HERO opponent Mike Huckabee urged his audience to bombard Parker's office with Bibles and copies of sermons. The address for Parker's office was displayed on screen, and hundreds of his supporters obeyed his request. 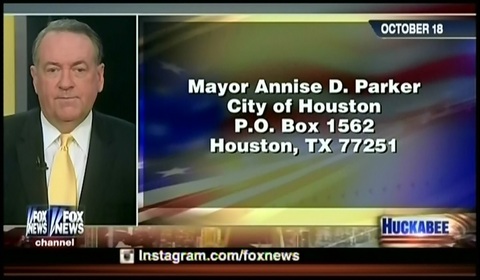 When asked about Huckabee's campaign, Parker said, "He's doing what he can to pump ratings for Fox News."

Fox's Houston coverage continued through the next week. On the October 29 edition of Fox & Friends, anchor Heather Nauert declared that Houston's subpoena requests were "backfiring now, and in a pretty big way," adding that "[y]ou can thank Governor Mike Huckabee for that." The address for Parker's office was again displayed on screen.

Later that afternoon, Parker announced that the city had withdrawn its subpoenas of the five pastors. At a press conference, Parker explained that she wanted to avoid having a "national debate about freedom of religion":

"I didn't do this to satisfy them," Parker said of critics. "I did it because it was not serving Houston."

"I don't want to have a national debate about freedom of religion when my whole purpose is to defend a strong and wonderful and appropriate city ordinance against local attack."

The move hasn't appeased HERO's Fox News critics. In a report on the subpoenas' withdrawal, Starnes urged his readers to still attend the "I Stand Sunday" rally and advocated for a public vote to repeal the ordinance. During the October 30 edition of Fox & Friends, Huckabee took credit for Parker's reversal and once again took aim at HERO -- which co-host Anna Kooiman described as allowing "40-year-old men to share restrooms with a fourth-grade girl":

FRC has similarly shifted its attention to pushing for a repeal of HERO, declaring that its Sunday rally would be dedicated to mobilizing against "Houston's unfair special rights ordinance that discriminates against religion and endangers locals."

That rally will be a powerful reminder of the tremendous amount of influence that Fox News' spin machine can bring to bear in even local non-discrimination fights. At every stage of the story about Houston's subpoenas, Fox generated controversy by omitting crucial information about the lawsuit, peddling falsehoods about HERO, and actively promoting efforts to pressure the city government.

Fox News didn't merely report the story -- it became the story, using blatant misinformation to spark outrage and then fanning that outrage into a full-on media firestorm that now involves some of the most extreme anti-gay groups in the country. Starnes and Huckabee are both still slated to speak at the "I Stand Sunday" rally on November 2, along with Duck Dynasty star Phil Robertson and right-wing activists the Benham brothers.

Now that the subpoenas have been withdrawn -- and given the rally's sponsors and attendees -- it's likely that the event will peddle many of the long-debunked falsehoods about HERO that have plagued Fox's coverage.

The campaign against Parker's subpoenas has evolved into a broader effort to repeal Houston's historic non-discrimination law. If that effort ends up succeeding, and the city is forced to once again allow discrimination based on race, religion, sex, sexual orientation, and gender identity, it will largely be thanks to the power of Fox News' misinformation cycle.