Fox News pundit Liz Trotta responded to the barrage of criticism that was unleashed after she made a series incendiary statements regarding rape in the military.

Trotta appeared on Fox News on Sunday. Fox News host Eric Shawn said Trotta "indicated that women who put their lives on the line for their country in close proximity to men are courting sexual assault. Some people understood [Trotta] to be saying that because of this, they are less deserving of protection from violent crime from their male counterparts, particularly because [she] criticize[s] the Pentagon's sex abuse programs that are put in place to protect them."

Trotta referred to prepared remarks and said she felt very misunderstood. She responded, "This is a subject that has never gotten a fair and open hearing either in the national media or in Congress." Trotta alleged that "the main objective" of "hardline feminists" is to "force the Pentagon to lift the ban on women in combat. Accordingly, the political correctness infecting the Pentagon has resulted in silly and dishonest fairytales about female heroism."

Trotta recalled the story of Pfc. Jessica Lynch, and said there were "countless other stories of fake heroism or exaggerated prowess in which women are the stars, many of them tailored for the New York Times and its agenda to promote militant feminism, no matter what the truth."

Trotta said, "the military is not a social services operation or a testing ground for gender wars. It is a fighting machine. Yet male troops are now encumbered with the realities of feminist biology. Women are not as strong as men. Their instincts and reactions in crisis are markedly different. There's a reality the left will not face. Biology is destiny."

Shawn also told Trotta that some people felt as though she said "all military men are rapists."

"I certainly did not say all military men are rapists," Trotta responded. "What I believe and tried to express, apparently not well enough, is that the environment of combat by definition sets up a situation where basic instincts rule. The niceties of male, female interaction fade in this arena and any scientist will tell you that testosterone rules."

Trotta then referred to the Pentagon study she cited last week that stated that the number of sex crimes committed by army personnel has increased by 64 percent over the past six years.

According to Trotta, Sec. of Defense Leon Panetta's "answer to the problem is better training for military lawyers, as well as sexual counselors and expansion of the never-enough bureaucracy that exists to support women victims in the armed forces."

Trotta later added, "Something is drastically wrong here, and both men and women are victims of the irrational claims of angry feminists." 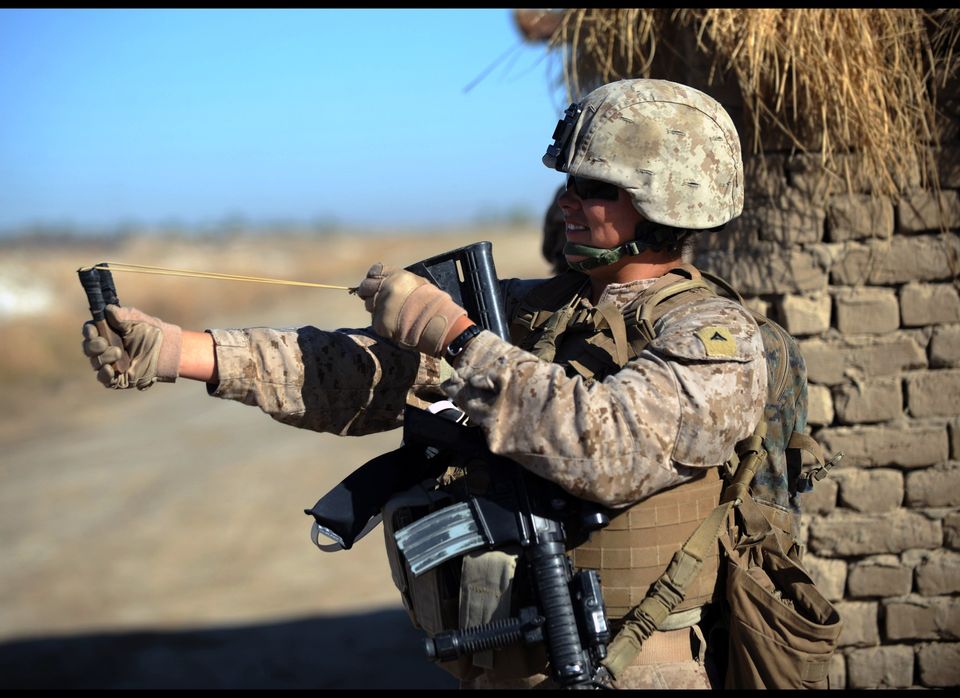 1 / 12
US Marine Lance Corporal Shawnee Redbear of 2nd Battalion, 1st Marines Golf Company plays with a slingshot during a patrol with her male comrades and Afghan National Army soldiers in Basabad, Helmand Province, on March 9, 2011. The US Marines deployed about 40 Female Marines in Helmand province and Nimruz for the Female Engagement Team (FET) programme to interact with Afghan civilians, specifically women and children.
Getty