It's been said that history will judge whether or not President George W. Bush will be found deserving of credit for having a transformative effect on Iraq. But if this map from Fox News is any guide, it's not something that we can afford to deny anymore! Apparently, we invaded Iraq so hard that they up and became Egypt, somehow! 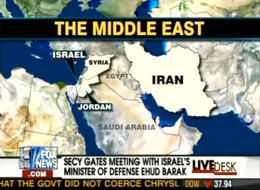 I can't wait to find out what Senate Republican Communications Center memo this map was cut and pasted from, as is.

Blaming Canada: Why is Canada trying to kill us, all the time? Alex Pareene goes looking for answers: "Thank god we live in the land of the free, where anyone, regardless of race, creed, or color, can fly to Arizona to receive the best medical care in the world, and then file a lawsuit against the government of Canada asking them to foot the bill."

Weigel Gets Famous: The Washington Independent's Dave Weigel is gathering all the right sorts of antagonists. Aren't the "Transparency Dodgers" sitting atop the National League West right now?

What's Larry Craig Been Up To?: According to the Idaho Statesman, he's founded a new consulting firm named New West Strategies, LLC. So, then: JOKES.

One More Trip Around The Sun: Today is my birthday! So, heck, I'm just going to put up the video for Frightened Rabbit's "Head Rolls Off" as a present to myself and as a commemoration to my continuing efforts to make tiny changes to the Earth: