UPDATE: Fox News issued a correction on Tuesday, according to Media Matters. "America's Newsroom" showed a revised chart, which is what Bill Hemmer said the graphic "should have looked like."

"That was our mistake," he said. "Correction noted."

It showed a bar chart comparing the number of Obamacare enrollments as of March 27 — 6 million — to the original projection of 7 million by March 31 from the Congressional Budget Office. There was a slight problem with the way the network portrayed things, though, as Media Matters noted.

Think you can spot it? 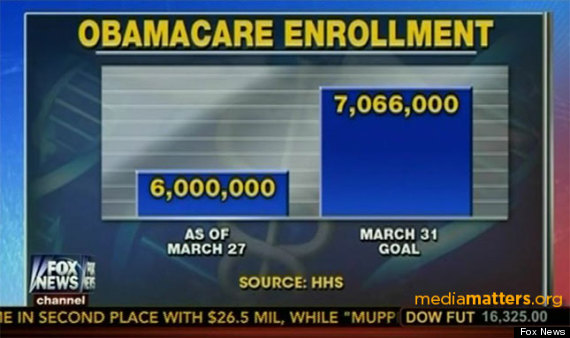 The graphic aired during Monday's "America's Newsroom" during a discussion of how Obamacare will affect Democrats running for election this year. While the CBO had initially predicted last May that 7 million people would be enrolled in the new health care exchanges by March 31, it later decreased that projection to 6 million following the botched rollout of Obamacare last fall.

People quickly went about correcting Fox News's chart for them: