Update: Barnhart has now posted the e-mail he claimed had come from Fox News PR tipping him off to Glenn Beck "raising fears" on that night's program.

The e-mail in question, however, did not come from Fox News' PR department; it was a newsletter from Viewer Services sent to a list of Fox News fans that opted-in to receive it.

The distinction may only be relevant within the media industry, but it is an important distinction nonetheless given that Barnhart claimed the e-mail came from "Fox News PR," not merely Fox News.

"There's no disputing that the tweet was a spot-on paraphrase," Barnhart wrote after reproducing the e-mail in question. But the dispute was not about phrasing so much as the origin of the e-mail, with Fox News PR denying vehemently that they sent Barnhart the e-mail. Barnhart's post only serves to prove that claim.

Further, while Barnhart accurately claims that I did not contact him before posting the below item, I did exchange e-mails with him since its publication but he stopped responding when I asked him to produce the e-mail in question.

Barnhart says he was never contacted by Huffington Post, but he was contacted by us for further explanation yesterday. He has not responded to email/phone calls. So we don't know the truth here, only that he hasn't fully explained why he'd tweet something that he claims came from the PR department at Fox but refuses to back that claim up with proof, now that Fox is denying it.

Below is the e-mail from Fox News Viewer Services that Barnhart tweeted about. 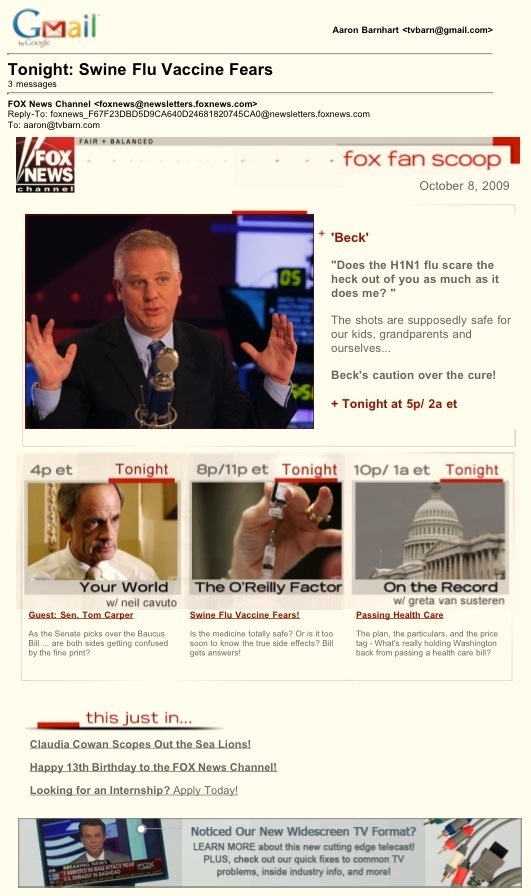 Original Post: Terry Moran launched a media firestorm when he tweeted something he shouldn't have. The Kansas City Star's Aaron Barnhart merely launched a "Countdown" segment when he did so.

Barnhart tweeted last week that Fox News representatives had notified him via e-mail that Glenn Beck would be "raising fears" on his show:

Fox News PR just emailed to let me know Glenn Beck will be raising fears tonight on his TV show. No poop, Poirot. 8:22 AM Oct 8th from TweetDeck

The tweet was so noticed that it merited mention on "Countdown" that evening, with Keith Olbermann using it as justification to call Beck's recommendation to buy gold "a scam."

The only problem? Fox News PR denies ever sending that e-mail to Barnhart, and Barnhart hasn't responded to their requests to find out where it came from.

"We never sent anything to Barnhart and he refused to respond to us when directly asked who he received that from," a Fox News spokesperson said.

The distinction is important, as e-mails from the PR department can be perceived as on-the-record and thus legitimized as the network's official position on a subject.

Barnhart did, however, walk back the claim somewhat, calling it a "smartass comment" in his blog post about the Olbermann shout-out but still neglecting to say who had sent the e-mail.

Watch the "Countdown" segment below: