UPDATE: As of 4:30 p.m. EST, Fox has apparently pulled the article in question from their site. The GW Hatchet reports that Fox took the story down "due to the student and university reaction, even though nothing in the story was factually inaccurate." Scroll down for a screenshot of the original story.

ORIGINAL POST:
George Washington University students are making their anger known over a Fox News story that reported a student's suicide alongside President Obama's visit to the school.

In response, GWU students are targeting Fox News and the post's author, Kelly Chernenkoff, through Facebook. The Facebook group HOLD CHERNENKOFF AND FOX NEWS ACCOUNTABLE has more than 600 members and counting, many of whom are openly questioning Fox's news judgment.

"[Fox is] making a connection between two unrelated events just to push their political agenda," one poster wrote on the group's wall. "It's disgusting of Fox news to devalue someone's death like this."

According to the GW Hatchet, Fox News changed the article from its original iteration. Danny Leimberg, creator of the above-mentioned Facebook group, grabbed a screenshot of the original story (see a larger version here). 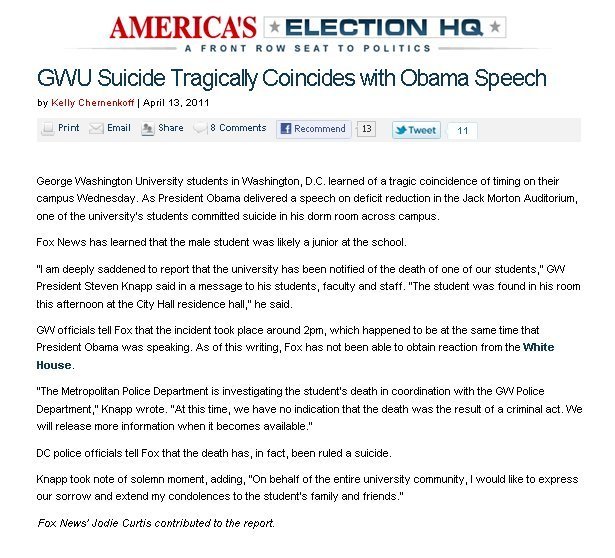