Oooh, boy! I know what Glenn Beck is going to be talking about on his Fox News Comedy Cavalcade today! The Hill reports that a video of White House green jobs adviser Van Jones is rocketing around the internet today, in which Jones, appearing at a lecture at the Berkeley Energy and Resources Collaborative, refers to Republicans -- and himself -- as "assholes."

The incident occurred last February, before Jones joined the administration and at a time when the battle to get the stimulus package passed was ongoing. A questioner asked Jones why it was that the Republicans were so successful at getting measures passed in the Senate without supermajorities, while the Democrats were hamstrung with 58 votes of their own. Jones short answer: "Well...they're assholes." The larger point being: sometimes it takes an asshole to get things done.

QUESTIONER: When [President George W. Bush] was in office, [Republicans] had a majority; it wasn't 60, it wasn't more than 60, but they pushed through all of these bills," the questioner began. "But when we have, you know, 58, we seem to not be able to move things as progressively as many of us here would want, as Obama wants. I know that he has a strong interest in bipartisanship, but when no Republicans are voting with him, ... how were they Republicans able to push things through when they had less than 60 senators, but somehow we cant?

JONES: Well the answer to that is, they're assholes.

QUESTIONER: I was afraid that was the answer.

JONES: As a technical, political kind of term. And Barack Obama is not an asshole. Now, I will say this: I can be an asshole, and some of us who are not Barack Hussein Obama, are going to have to start getting a little bit uppity. 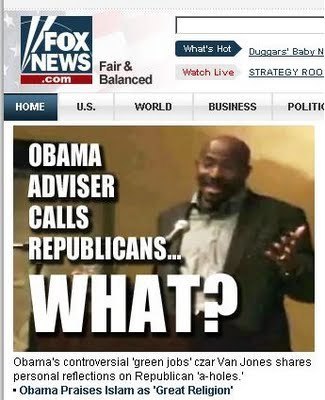 Fox News is already totally LOLcatting this! This makes sense. It has everything that Fox could possibly want: Van Jones! Intemperate remarks! Someone besides Dick Cheney swearing! Berkeley! A black person using the word "uppity!" The word "collaborative!"