The Oscar buzz for Bennett Miller's "Foxcatcher" has been going strong since the film premiered at Cannes back in May. The drama, based on a true story, stars Steve Carell in an acclaimed dramatic turn as John du Pont, a millionaire who uses his wealth to help train Olympic wrestlers. Channing Tatum and Mark Ruffalo portray brothers Mark and Dave Schultz, respectively, in equally impressive dramatic roles. HuffPost Entertainment editors Matthew Jacobs and Erin Whitney saw the film when it premiered at the New York Film Festival last month, and this is what they thought, spoiler-free: 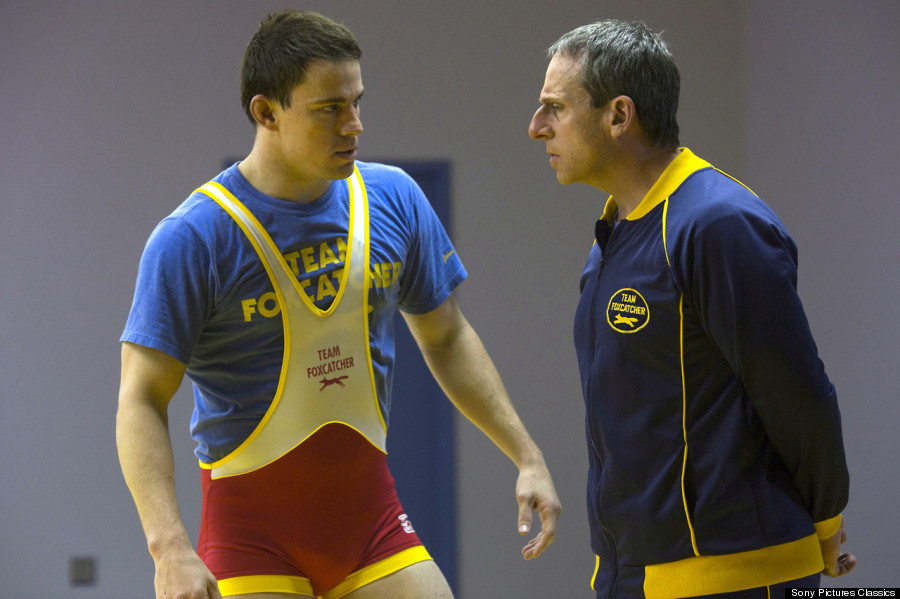 Jacobs: Even if you've followed "Foxcatcher" buzz since back when it was slated to open last December, Bennett Miller's ("Capote," "Moneyball") latest movie is still a shocking affair. You won't believe it's Steve Carell behind that honker of a prosthetic nose, with his head cocked back in misguided confidence and his chest puffed up in phony machismo. You'll blink a few times to register the surprise of seeing Channing Tatum's vulnerable waddle, which is as much an expression of a beefy wrestler as it is an insecure loner. And Mark Ruffalo commands such layers behind his performance -- it's softer than the others. Some may call it "normal" by comparison, but that doesn't make it any less dynamic. "Foxcatcher" is an actor's movie, and it contains each of the trio's career-best performances.

While watching "Foxcatcher," we are kept at a constant distance. It's an icy movie, one that might alienate some for its unsentimental, almost removed approach. I loved that about the film. It's a story of madness, wealth and loneliness wrapped into a portrait of a man whose inherited power made him feel infallible. John du Pont's (Carell) riches should have provided stability, but he lived in a dreamworld wherein he thought himself more indomitable than any amount of money can guarantee. With that, we are given a quiet study in derangement. Mark Schultz (Tatum) was missing a father figure; he thought he'd found one when du Pont invites him to train at Foxcatcher Farm, where the multimillionaire has built a compound to mentor wrestlers. But when Mark is unable to recruit his brother Dave (Ruffalo) to join Foxcatcher, du Pont lashes out (in his own muffled way) and that father-figure offer is laid to rest. The steady breakdown that ensues among the three men raises ominous questions about self-worth: How much of it does each of them have, and can they survive after it's ostensibly taken away? The distance of the film, with its cautionary score and restrained dialogue, is what makes the answers so powerful. Did you feel the same, Erin, or did that take away from your experience with the film?

Whitney: I can agree with almost everything you said, Matt. Except those very reasons are why I did not enjoy the film. That isn't to say that it points to a failure -- it just wasn't a pleasurable viewing experience or one I'd revisit. There are many ways of tackling such a story, and Miller opted for a very distanced approach that turns the audience into an objective onlooker. I do think this suited the storyline well, though, with the cold and removed perspective forcing us to question who the evil was throughout.

While watching, I tried to forget the ending of the film, which is known if you're familiar with John du Pont's life story. There's no clear-cut hero or villain, or even anti-hero, in this story, as each of these characters is searching for success and recognition in his own way. Tatum's Mark has forever lived in the shadow of his older brother, despite the fact that he has his own Olympic gold medal. He wants a sense of masculine recognition. Ruffalo's Dave seems the most content in his goals, but still has a passion for teaching and coaching others to victory. Meanwhile, John suffers from the constant disapproval of his respected mother (Vanessa Regrave) and is looking for a way to not only gain her support but to prove his manhood. It's interesting that John is, in a way, like a distant, more realistic cousin of Carrell's "40-Year-Old Virgin" character. John was a loner growing up, and has become emasculated by his mother's award-winning race horses. His family's wealth masks his very childlike desire for acknowledgement. Thus, John's eventual villainy (we won't spoil it entirely) is buffered by a slight empathy for the character. Still, Miller doesn't let us get close enough to really feel for these characters, and maybe that's where the film's strength lies. It is truly an accomplishment in an objective telling of a real-life crime, as objective as any art can be. 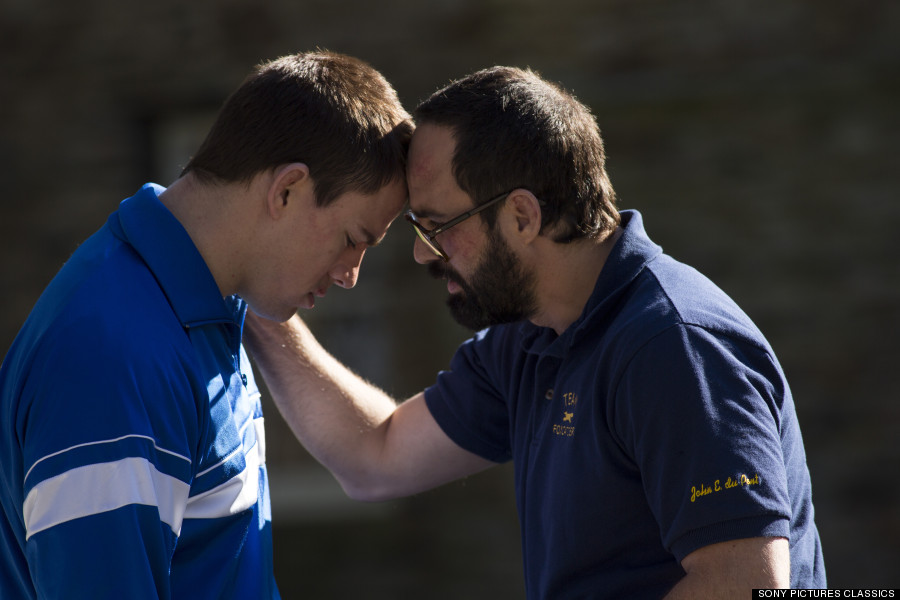 Jacobs: Wow, you definitely just likened "Foxcatcher" to "The 40-Year-Old Virgin." Props for that. I think we can end this conversation right here.

In truth, this distance we speak of also accentuates how singular each of these characters is: Mark is vulnerable and John is inured to all potential influences, including his mother's. That makes for a particularly strained dynamic between the two men. We feel a slight menace bubbling when John first arrives to recruit Mark, and the way Mark then works overtime to defend and honor John has the undertones of a distinct threat that looms. It's in that threat that "Foxcatcher" becomes a portrait of wealth and loneliness gone wrong. It's a tale of terror for the "1 percent." One man is so embittered by what he doesn't have -- no wrestler's physique, no marked talent beyond his riches, no one who appreciates him outside of sycophancy -- and the other is so unwittingly anxious to find a life that stretches past the Ramen noodles he eats alone for dinner. Seeing Tatum and Carell enact that, with a lot of questions raised in between and only subtle answers provided, is more powerful than any sentimental, exacting approach to this story could have provided. No lectures needed.

After we saw "Whiplash" at the New York Film Festival, a journalist asked J.K. Simmons whether the vicious music instructor he portrays is a repressed homosexual. We both agreed the question was silly because the movie doesn't seem to hint at that whatsoever. But it might be a more guided query when talking about du Pont, which, come to find out, was indeed a discussion point in the aftermath of the events seen in the movie. (Don't click this link if you don't want spoilers, but here's what I'm talking about.) He purchases a machine gun for no reason other, perhaps, than to vouch for his machismo. Instead of mentoring Mark to excellence, he feeds him cocaine and stands back as Mark self-destructs when John doesn't get what he wants. Repressed sexuality or not, this is certainly a haunting look at what endless riches can do to a person. That theme can feel clichéd ("The Wolf of Wall Street" and "Blue Jasmine" were two of last year's Oscar contenders, after all), so depicting it all from a certain objective distance was vital for me. 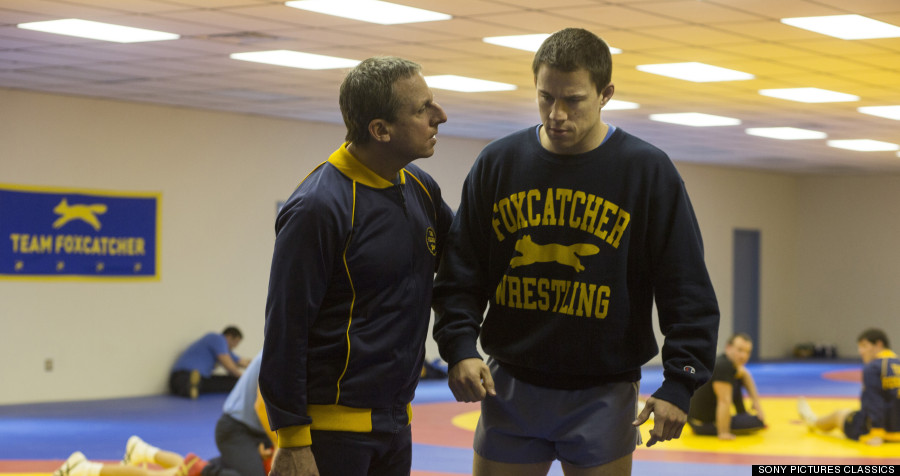 Whitney: John's sexuality is not something I found myself directly wondering about while watching the film, but the homoeroticism of wrestling was definitely present onscreen. There are a few powerful scenes in particular that point to the sensuality and intimacy of the sport, which I think Miller captures really well with his steady, patient shots. One is when John shows up at Mark's window in the middle of the night, ready to practice. As Mark answers the door half-asleep in nothing but his sweatpants, there is a sexual tension that begins brewing, even if latently. The very next scene is of Mark, faced-down on the practice room floor with John on top of him, attempting to hold the wrestler in a locked position. This moment, as I remember, was nearly silent, while the camera stayed on the two men, hardly moving in an aggressive restraint. Part of the uncomfortableness of this came from John's clear lack of wrestling skill -- the man tries to show off the most basic of moves to his bored mother later on, obviously having little to no athletic ability. Yet another element of the awkward atmosphere seems to come from this odd tension between the two men, as John pins Mark down, desperate for fraternal intimacy, and Mark, whether fully willing or not, obliges.

I'm not sure if that necessarily means anything, or if those scenes are meant to allude to any sense of dormant homosexuality. I do like Miller's ability to bring out the sensitive and rather delicate undertones of a sport that appears so vigorous and purely masculine. He also highlights the deeper emotional physicality between Mark and Dave in one practice fight between the brothers in the beginning. While they may appear to be wrestling, there's something much more powerful going on, a competitive dance between brothers that is so ripe with emotions it bring one of them to tears, though restrained ones. But the wrestler with the wet eyes soon shuts himself down to such an extreme that we only see his anger burst out later in a terrifying fit of rage -- one that shed the actor's real blood. That's something "Foxcatcher" undoubtedly achieves quite well, stifling the emotions only for them to erupt suddenly in the last few chilling moments. And when it happens, even if you know the ending, it comes as a startling shock.