Update: Here is the audio of Chris Wallace calling into Brian Kilmeade's radio show later that morning where they talk about the incident and Wallace makes a joke about the Fox News executives. Ha. Fuller description below; link is here.

What an interesting morning on "Fox & Friends" today — not only did you have "Fox News Sunday" anchor (and general Fox heavy) Chris Wallace upbraiding the morning trio for engaging in "two hours of Obama-bashing" over Barack Obama's comment that his grandmother, whom he described in his race speech as admitting to crossing the street when she saw a black person and sometimes making race-related remarks that made him "cringe", was a "typical white person." Wallace chided hosts Steve Doocy, Brian Kilmeade and Gretchen Carlson for focusing on those three words and not providing the context for Obama's remark, which placed it in a broader context of historical race-relations and the fears and prejudices associated with them that lingered in society. "I love you guys, but I want to take you to task respectfully if I may," said Wallace, who ignored Doocy's jokey toss relating to what Wallace's bathroom might look like. Wallace said he'd been watching the show all morning and had been disappointed with what he'd seen: "It seems to me that two hours of Obama bashing on this 'typical white person' remark is somewhat excessive." Wallace pulled out the entire quote, literally pulling out a newspaper to read it on air:

"But she is a typical white person who, if she sees somebody on the street that she doesn't know, there's a reaction that's been bred into our experiences that don't go away, and that sometimes come out in the wrong way, and that's just the nature of race in our society."

Doocy doth protested, claiming that they had indeed read the entire quote, but Wallace pooh-poohed that claim, saying that on a day when there was other news about the endorsement from Bill Richardson and the Obama passport security breach, there were other things to discuss. Watch Wallace take them to task below — and then read on to examine the remark had actually been presented:

Part Two: Was Wallace being fair, or was Doocy right in claiming that they had presented the phrase in context? Judging from the clip below, both — thanks to Brian Kilmeade, who was the only person who seemed to care that Obama's quote was actually put into the context of both his larger comments and the framework of discussing race in society, urging his co-anchors to "listen to [Obama's] intent." It was Kilmeade who piped up with the rest of the quote after the radio interview clip played and cut off right after Obama said "typical white person," and it was Doocy who dismissed that context and kept the focus on those three words, and whether the audience found them offensive, holding up a copy of the NY Daily News with those words across the page — as all the while they were on a chyron at the bottom of the screen. Kilmeade argued strenuously for nuance and context, and for that he ought to be given his due (and we're not sure if his walking off the set when Doocy jokingly called him a "typical sports anchor" was partially in real exasperation) — but either way, it's pretty clear from the clip below how Wallace arrived at his impression. Kudos to both Wallace and Kilmeade for speaking out and demanding that a larger sense of context and understanding be brought to bear on the situation. Video of the exchange below, followed by a screengrab of Doocy and the chyron mentioned, and Doocy and the paper. 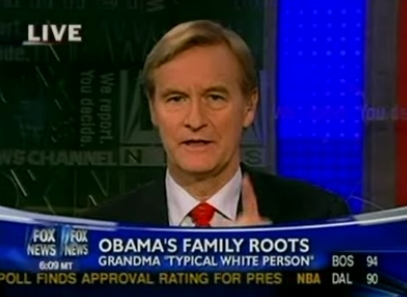 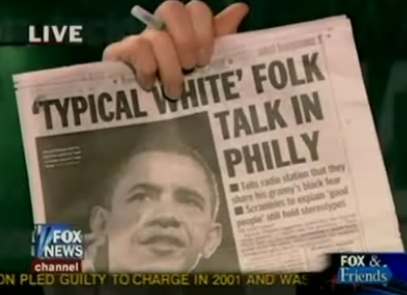 Update: Johnny Dollar has audio of Wallace calling into Kilmeade's radio show — Kilmeade talking about the divergent opinions on this, and noted, interestingly that he was "honored that we had a real conversation on the air rather than off the air." Kilmeade and Wallace agreed with each other about the content of the show, and then there was a funny moment: Wallace asked, "How mad is Doocy at me?" and Kilmeade said, "He's mad. I'll be honesty, he's really mad," but then said that, hey, it was healthy to "mix it up once in a while." Kilmeade said he was glad Wallace spoke up even though "I'm in a minority on our show" — to which Wallace added: "And some of the executives." Oh, zing!

Wallace also said that he didn't agree that the Democratic nomination was over, because the superdelegates were still a wild card. Also a funny moment where Kilmeade said that he'd never be on Wallace's show, and Wallace said, "Well, that's true." Ha.

Also, one other note: Gretchen Carlson was smiling through Wallace's criticism, which seems sort of inappropriate. But is apparently just par for the couse with her.