I thought of Fr. Jack Trese at the Traverse City Film Festival this past weekend. In its eleventh year, Michael Moore's enormous contribution to the economy of northern Michigan has outgrown the city's world-famous Cherry Festival. Even staunch conservatives in town are giving him his due for spearheading the 6-day screenings with thousands of friendly volunteers assisting at the film-camps, youth activities, shuttle buses, ticket booths, outdoor movies and panel discussions open to the public. 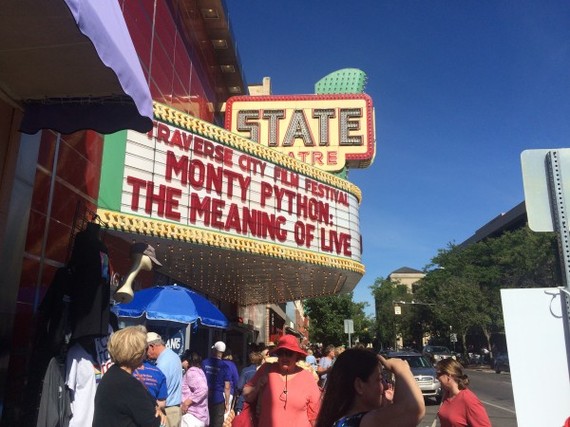 In stand-by for the insightful documentary as the Python crew hits their 70s.

We left our campsite early Saturday morning, riding our bikes to the Opera House to get in line for the Comedy Panel. We got great seats and waited smugly for the show to begin. I thumbed through the program and read Mike's intro explaining that the theme of the 2015 festival was inclusion, particularly in the LGBT community. An example I heard from two different Republicans of his economic acumen describing the deal he made to outfit the Central Elementary's Lars Hockstad Auditorium with new seats, sound equipment and projection -- IF the Traverse City School District would allow Martin Luther King, Jr. Day to no longer be a normal day at school for the city's students. They agreed and the theater is wonderful.

The comedy panel began kind of grumpy, as expected on a Saturday morning with the nocturnal representatives of stand-up comedy and film folk. The host got a bit of applause when he mentioned the dangers of the open-microphone. He asked that questions from the audience actually contain a question--and are not preceded by long-winded speeches. 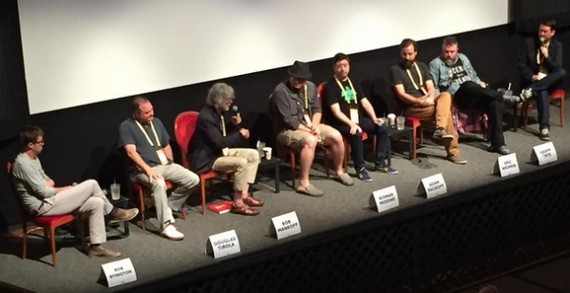 The tired panelists even laughed at that one. Rescheduling this group's slot to a later time might be second on the "to-do" list for next year. But the first change is an observation that was made not only in this year of inclusion but also the previous year. "Why aren't there any women on the panel?" It was true. The panel was omitting females and anyone of color not described as someone with a shade from the Caucasus region. As a school teacher who has had to observe many classes and make suggestions to new teachers, what followed for the next 15 minutes can only be described as an awkward train wreck as the panel got defensive, instead of the easy-out that was finally delivered, "We don't know who schedules us. We didn't pick us!" And the even easier out would have been, "You're right. I'm not sure how this happened but we'll be sure to address it." The hands starting rising; the mics were passed and no questions came during the awkward debate. 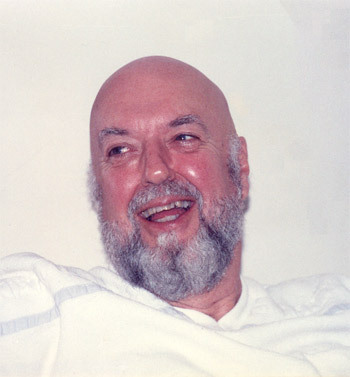 Which brings me to Fr. Jack. A beautiful man who could have deftly handled this discussion. He is dearly missed -- but still remembered for one flaw, his open-microphone policy.

"Isn't that the church where people clap and everybody talks too much?" asked my grandma. She was referring to St. Columban's, where my parents finally found a home. Fr. Jack Trese, known as the "hippie priest" to many in Detroit's archdiocese, was an exception for them in the Catholic faith--he was all-inclusive, accepting of all human frailties, thought children were to be honored and, my favorite part, had a great laugh.

As a third grader, we left Cincinnati after just three short years and ended up north of my parents' Detroit neighborhood in the metropolis of Clawson. The Kennedy-Democrat, post-Vatican II couple tried the hometown church, the Royal Oak church and a couple others before locating the little building beside the Jewish cemetery and behind the giant Lutheran facade on 14 Mile Rd. Like Clawson's location, most people outside of the six-block radius of St. Columban needed to be convinced with photo-evidence that the church was really there.

Small fires and no brimstone, that's what Ann and Jim Walsh wanted. They didn't need to be lectured, warned or assured that their way was the only way. As a small boy peering up from a crowd of sweaty kids surrounding his altar on Christmas Eve, Fr. Jack looked pretty scary--perhaps 8 feet tall, flowing robes and a big beard. You don't notice twinkling eyes or kind smiles when you're daunted by someone--even when the congregation roared at the reply from the girl sitting next to me.

"And do you know what a carpenter does?" Fr. Jack asked in his best Art Linkletter.

Jack would begin every mass with one commandment -- breathe deep. Probably the most important inhale I took was at our wedding when he reminded everyone to slow down, soak it in and enjoy one another's company. I appreciated even more that extra blast of oxygen last month when I uploaded the video of our exit from the church that day 23 years ago and noticed how many dear people are no longer with us. The day was perfect; we danced in the rain and even walked up to Clawson's Fourth of July fireworks that evening in-costume.

In the following segment he sets the tone for our wedding by welcoming all and acknowledging that amidst joy there is, of course, sorrow...

When I was in line for my confirmation, I heard Fr. Jack's warm but firm voice behind me reminding me to have fun, relax, and to try not to crack my knuckles so loudly. After college, he even joined my dad and me on a road-trip to the 1988 Irish-Air Force game. He teased me when we were heading back from what he called a "golden day." You know Kevin, you're kind of like my bishop; we do all the talking and then you just toss in the punch line."

When Pope John Paul II began steering the church on its more conservative route, his statement in 1980 that women should not be altar servers was met by great frustration from many--including my mom. To her relief, Fr. Jack not only had altar girls that Sunday but had a nun deliver the homily. Over the years I lost count of how many happily married couples told us that Jack's church was the only Catholic church that would take them--because one spouse was not Catholic, hadn't been in the parish long enough or was divorced.

I remember when Fr. Jack's open-mic started and we said goodbye to the 60-minute mass (or 35 minute if you caught the 7:30 AM show with no organ). During the Prayers for the Faithful, right after the homily, the lector traditionally reads 5-7 sentences for various people in need of prayers such as the military men and women, the sick, the departed as well as to the special person to whom the mass is being dedicated. It might have been the same time that the wireless mic arrived in churches--when Fr. Jack would walk between the pews where he liked to have a conversation instead of lecturing to us from on-high. He asked, waving the microphone toward us like Phil Donahue, if anyone wanted to share any special intentions, "What's in your minds and hearts; what do you want us to pray about?" 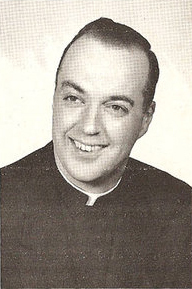 Congregational shyness, over the years, fell quickly away as some of the regulars began a serial-like update on their kin. My inner fourteen year-old still cringes when I remember one man talking about prayers needed for his son and daughter-in-law who were trying to have a baby--he didn't have to use the word "seed," after all.

In truth, all of the stories were interesting, heartfelt and I actually meant it when I said "Lord hear our prayer." And many of the reporters had a definite flair for public speaking. But the mornings would drift dangerously close to afternoons and the elderly, head-shaking pre-Vatican II guard in the front row was definitely becoming nearly as impatient as us junior high schoolers.

I was in a local funeral home parked in a comfy leather coach in front of the fireplace, waiting to speak with a friend whose mother had just passed. I was probably in some type of forgotten hurry and was looking around the faux-den when I glanced down at the coffee table and saw Fr. Jack smiling up at me from his funeral mass card. I discretely took a quick picture with my phone and shared it with my mom and sisters. It was a clear reminder to a knuckle-cracking boy to be patient--as Jack was far too kind to cut off his flock mid-prayer. I took a deep-breath and remembered where I was and why I was there. I laughed remembering one of his responses when an usher was teasing him for overtime pay: "At least you don't have to watch as much of the Lions game now." 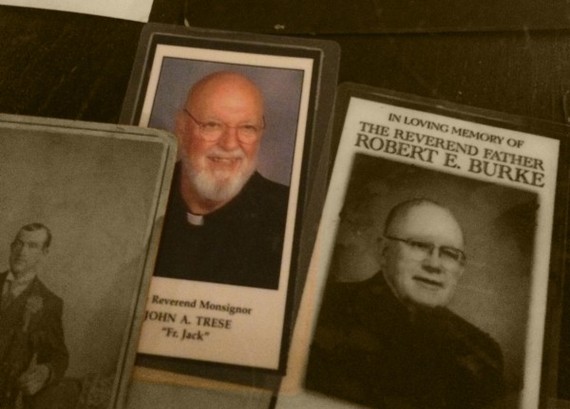 Comfort from a coffee table.

As Fr. Jack grew older, the open-mic time grew longer until his retirement. Those long masses with annotated rich gospel readings were becoming kind-heartedly notorious. I love the warmth of his voice, his pace, humility and humor of this October 1995 excerpt from his reading of "Lazarus and the Rich Man." In the background is a child who is now most likely a parent and Jack continues on with life going on around him.

Even through his bout with cancer, he would continue to teach with emails, such as this amazing piece on mortality (link).

The first night I was home from the hospital was a nightmare of fear and panic. The next morning I was having breakfast with Ginny, my sister, when the meltdown happened. I hung on to her and I wailed. There were no tears, no sobbing, just huge sounds from way down deep. I had never heard anything like it before. Great sounds, some like a roar, some shrill. I could never make such sounds consciously. When it subsided, I was calm.

I was not aware of any one feeling or of any specific feeling, It was like a geyser of primal feeling, frustration, fear, confusion, weakness, anger, impotence, vulnerability, loss. During the following weeks it happened twice more, with lesser intensity, once with Mary Fran and once with Ginny. They are strong women and that gave me permission to let go. I knew they would not be overwhelmed by the power of my outburst. Tom, my brother, points out that we need someone like that around, because we are afraid if we were alone during the meltdown we might not pull out of it.

My experience is not unusual. In fact it is common. My reflection is not that this is a discovery but the awareness that this experience is a gift. I have a shadow side that is an essential part of who I am. I have to see it in order to know the complete Jack Trese. Otherwise there is a whole part of me that is a stranger to myself. The sunnyside of me is more appealing and rewarded so it is easy to ignore the shadowside. But that is not the complete me.

Eleven years after his death, as he continues on as an amazing podcaster and blogger, what wouldn't any of us do but to also see that large, familiar presence expertly conducting our Sunday mornings, our weddings, our funerals and, most importantly, our respiration.

By Bill Griffin: Upon Fr. Jack's 2004 cremation, a single rose survived his cremation and has become a local legend--particularly among funeral directory. A perfect quote from Jack: "I have never had anything supernatural happen, and it doesn't bother me whatsoever. I'm just as convinced of the reality of Jesus and His message and His divinity without any additional evidence in my own life."

Obituary Tributes: Including a moving 1988 church bulletin letter on the death of Cardinal Dearden, Archbishop of Detroit.

Fr. Jack Website: Including audio recordings of his sermons and gospels, including church bulletins with his writings.