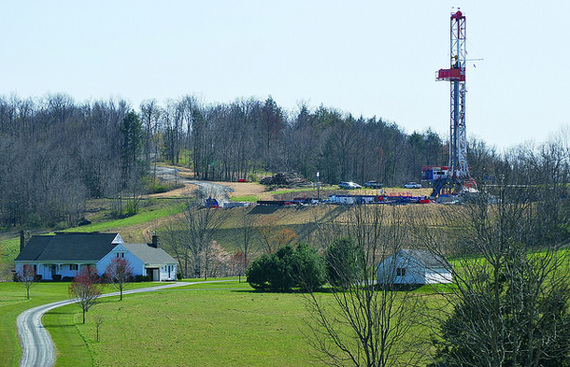 A new study, published this week in the journal Environmental Health, identifies potentially hazardous concentrations of air pollutants near some oil and gas operations in five states.

The research shines a light on what some communities face as US oil and gas development accelerates. The United States is now the leading natural gas producer in the world. The number of natural gas wells in our country has increased by more than 80% since 1990. There are now half a million natural gas wells in the US. Countless communities are living side by side with well pads, compressor stations, and pipelines -- some for the very first time.

In a years-long collaborative project, residents in Arkansas, Colorado, Ohio, Pennsylvania, and Wyoming were trained to take air samples, which were lab-tested for dozens of volatile organic chemicals.

Why did these community members walk fields, farms, and country roads in five states, sniffing for telltale signs of pollution?

Because no one else would.

Many of these community members have told heartbreaking stories about the air pollution they breathe each day. They have watched their rural communities become industrial sites, complete with chemical mixing facilities, increased truck traffic, compressor stations, injection wells, and pipeline spills. They have wondered whether their nosebleeds, hair loss, skin rashes, headaches, and other health complaints could be related to the oil and gas operations near their homes, schools, farms, and ranches.

But when they asked their local officials to help them figure out what was in their air, nothing happened. No health studies conducted, no air monitors installed. Meanwhile, the people kept on breathing. Day in and day out.

So they sucked air into special Tedlar sampling bags when they smelled, saw, or felt something funny. They took samples near discharge canals, compressor stations, separators, injection wells, and well pads. They stood anywhere from a few yards to a few hundred yards from the oil and gas infrastructure. While taking the samples, they reported health symptoms including headaches; dizziness or light-headedness; irritated, burning, or running nose; nausea; and sore or irritated throat.

It's a power to the people story, because they took air pollution monitoring into their own hands, and showed the profound limits of our government's current approach to safeguarding the air near oil and gas operations.

They found that concentrations of benzene, hydrogen sulfide, and other volatiles exceeded health-based standards in 16 of the 35 grab samples collected in five states. Formaldehyde levels, sampled with a different method, were detected in 14 of 41 samples. They detected toluene, xylene, and other toxic compounds as well.

I visited some of these sites myself, and talked with these brave citizen scientists about their project. I experienced dizziness, nausea, and headaches when I was near the injection wells, compressor stations, and well pads. I don't know for sure what caused my symptoms. But I know it was a wake-up call for me.

These community members, and the scientists with whom they co-authored their study, understand that this research does not prove that their health problems were caused by the toxics in the samples; nor does it prove that all gas wells emit toxic chemicals. They don't have the decades to undertake those kinds of studies -- nor do they have the money to do highly sophisticated air samplings and tests. What they have is the desire to get officials to pay attention.

Many other studies across the country have pointed out exactly the same thing: some well development sends toxins into the air. There is an expanding area of recent research dedicated to exploring the potential health impacts of oil and gas development. (See, for example, here, here, and here.) But this is one of the first studies published in a peer reviewed journal to have empowered community members to sample their own air, because they are concerned about what they are breathing, and have had no other way to get the ball rolling on finding out what is going on in their communities.

And their data signals a problem:

We've got a rapidly expanding extractive industry with no monitoring requirements, no disclosure requirements, and inadequate federal air quality regulations. The substance being extracted -- methane -- is far more powerful a greenhouse gas than carbon dioxide, and it appears to be leaking by mistake into the atmosphere at climate-wrecking speed.

Right now EPA is in the process of deciding whether to act on methane pollution from the oil and gas industry. Please join with MCAF to tell the EPA that they must do so. Cleaning up methane leaking from oil and gas infrastructure will benefit local air quality and our climate.

Here's to walking fields, farms, and country roads without having to sniff for signs of pollution.