It is better to give than receive -- particularly homework. But for one weekend my high school students didn't mind, at first, being asked to watch the Super Bowl and its commercials.

The quickly frowning class soon realized it would have to count the number of edits, how a narrator was used, the use of graphics, music, celebrities, etc. But my favorite column read, "Intended Audience." I started the assignment back when the agencies realized they could had grab the same audience that didn't get a sandwich during a timeout for the first Macintosh ad in 1984 -- and the Bud Bowl began.

Generally, a football game will not be the correct forum for Mop & Glow, pet food or feminine hygiene. (Someone on Madison Avenue once gave birth to the strange descendant of "It's not your father's Oldsmobile" as the cringe-worthy, "It's not your mother's tampon." )

The standards for the "Big Game," as the NFL insists other companies that won't be sponsors refer to the hallowed Sunday-game is the trifecta of trucks, beer and fast food with the occasional spot for a mindless action movie.

But somewhere in the last ten years, erectile dysfunction became a close runner-up to Miller Lite.

February was the tenth anniversary of the holier-than-Timberlake outrage created by the "wardrobe malfunction" of Janet Jackson which begat the awful time-delay that no longer permits one to watch the Tigers on TV while listening to the radio announcers (see a certain Rod Allen post).

But really, I preferred to discuss the momentary breast appearance to my 10-year-old son than the ensuing Viagra spot.

The same reason that reruns of Matlock or Murder She Wrote yield spots for life insurance and bladder control do-dads you're certain to see stock portfolio and Cadillac plush productions during the Masters or during the Cream and Strawberries of Wimbledon.

Commercials have been a necessary evil in my life since I wondered why there were gaps in my Bugs Bunny and Roadrunner cartoons on Saturday morning. My dad explained that it was so they could pay the bills to show me the cartoons. That made sense. And the ads weren't too bad; the intended audience was some six-year-old on the floor two feet from the glowing screen convincing me that most of my childhood crises could be solved by GI Joe, Twister or Operation.

One of the greatest moments of my gullibility came from this 1973 spot for the VertiBird Air Police from Mattel:

The following Christmas it was under the tree -- along with eight "D" batteries. The following day it was broken. I can still feel the pain on my cheek as the blades got a little too close after I became as zealous in my hope to air-lift the bad guys as those little over-actors were.

When Pandora radio emerged it, like AMC, was commercial-free. But sadly, like a five-hour airing of The Godfather or my paid Hulu-viewing, the barely-tolerable pair of 30-second ads pops into my eardrums.

I was scanning a pile of snapshots, something I'd originally set out to do 17 months earlier (and chronicled in this blog). But my son's graduation party is coming and there's nothing like a deadline to make you take an hour or so and start scanning a couple hundred pictures from 1997. 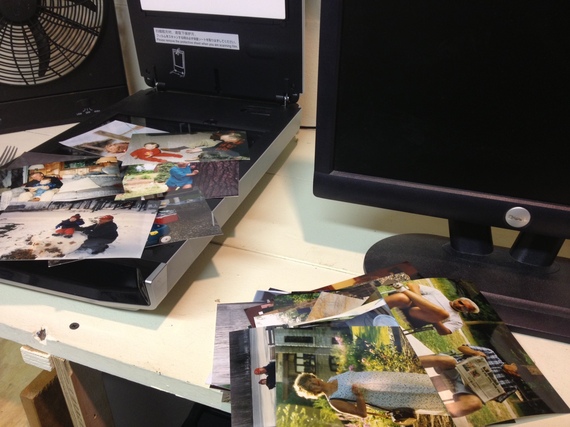 It was a double-whammy. I grabbed the stack and flipped them over and ran across sixteen photos of my dad with a two-year-old version of the graduate. If it weren't hard enough to revisit those pictures taken just before the accident, I had selected the Rat Pack Pandora channel -- seemingly safe since it was most likely going to involve Dean Martin playing the drunk, mixing up words for cheap laughs from the Vegas lounge: "I left my heart in Fran Sancisco..."

But as I turned over the third picture and got that choked up feeling on my throat, the Pandora's box opened to play Nat King and Natalie Cole's eerie remix of the dad's classic "Unforgettable." Boom. Insta-tears. Late father. Grandson. Sentimental son scanning pictures in a safe basement hideout. 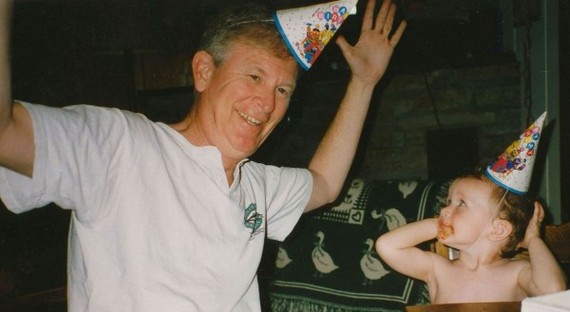 But I soldiered through the scanning and was proud of myself. I was in a good place and feeling pleasantly nostalgic and happy for my son's graduation and grateful that my dad got to spend two years with Aidan... until the moment was ruined by Pandora and its odd audience-gauging algorithm.

The first "ad" featured a pleasant-sounding woman who decided to buy a ranch with her husband and children, then how proud they were to have fracking occur on their land. The controversial hydraulic-fracturing to access natural gas has led many environmentalists to exhibit the side effects by putting a lighter to drinking water. At the end of the spot was the disclaimer that the happy mom was sponsored by the petroleum industry.

There has been some online opposition to the spot, including Roya Brown who contacted the Pontius Pilate Pandora who claimed they didn't make the ads, they just played them. Brown responded: "So, I argued that if someone wanted to put an ad for prostitution, I am sure that Pandora would not accept it and I frankly don't see any difference between prostituting your body or exploiting/ fracking earth."

The second ad was a more surgical, so to speak, technique of local advertising science that must spring from mysterious IP address or my cable-provider.

Either way, the scary Beaumont Hospital narrator began with his ominous music backup band, letting me know that if I come to Beaumont for either "an EKG or a heart-attack," I'm in good hands. The bottom line of all this terrifying Beaumont HAL-like calmness is simple: "Do you have a Beaumont doctor -- or do you want to die?"

In the course of just four minutes of "free internet radio," I'd run the gamut from the very-real world of life, death and acceptance into the shady realm of environmental euphemism and non-profit medical profits.

Perhaps this ping-ponging of emotion and "facts" plays well with this Pandora's stations audience, the Rat-Pack fans -- even from folks like me who were too busy being born to cruise the strip in a convertible with Ann Margaret. Either way, the nostalgia of that playlist works well with the homey-narrators of Beaumont's funeral-director narrator and the fracking-rancher wife.

My students weren't as happy with me and my "intended audience chart" on Super Bowl Monday. But once in a while I'll get a Facebook post from a proud parent who's informed me that they've made their own kids as miserable watching commercials as I'd made them.