Hundreds of thousands of active oil and gas wells go without government inspection in any given year, and fines for regulatory violations are too small to change drilling company behavior, according to an energy watchdog group's review of regulation and enforcement activities in six states.

The analysis suggested that state regulators are often understaffed, underfunded, or otherwise unable to keep pace with rapidly expanding oil and gas exploration and the attending risk of spills, leaks, contamination and accidents that might arise through negligence or deliberate shortcutting. The review lands amid a contentious presidential election that has been animated in part by starkly different views on energy development and the appropriate role of the federal government in ensuring that public health and the environment are protected from industrial activity.

"I was surprised at how uniformly inadequate things were," said Bruce Baizel, a staff attorney with Earthworks. "If you compare this to building a house -- you have to have multiple inspections during the home-building process. Why is that not the case here, with oil and gas drilling? It should be. But you can get a permit to drill a well and never see a single inspection. The regulators don't like for that to happen, but it does happen."

Oil and gas industry representatives, as well as state regulators, quickly dismissed the report as both flawed and biased.

"As could be expected from Earthworks, this is not a scientific study or even a sincere attempt to fix any supposed problems with state regulation," said Lee Fuller, vice president of government relations for the Independent Petroleum Association of America, an industry lobby group. "Its key recommendation is to shift the burden of proof away from those making accusations about impacts and onto the industry, which naturally would give Earthworks more power to shut down oil and gas development with even less evidence."

Among other things, the new analysis, which took two years to complete and was partially funded with a grant from the Heinz Endowments, a philanthropy based in southwestern Pennsylvania, found that only a fraction of active wells in any of the six states examined are actually inspected by state regulators to ensure that they comply with state rules and regulations.

In some states, requirements for frequency of inspection are non-existent, the analysis showed. In others, recommended guidelines have been developed, but often go unmet. Pennsylvania's guidelines, for example, call for at least five inspections of each well during the drilling and preparation stages -- the period when most problems typically occur -- and at least one inspection per year after completed wells begin producing, according to the Earthworks analysis. 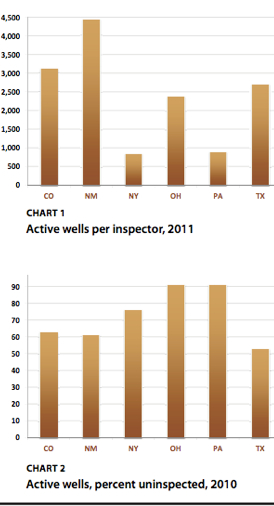 In an email message, Katherine Gresh, a spokeswoman for the Pennsylvania Department of Environmental Protection, argued that the Earthworks report created a skewed picture by conflating data on tens of thousands of older and safely operating conventional wells, and newer sites that are plumbed using horizontal, hydraulic fracturing.

"DEP focuses its inspection efforts on wells during the site development and drilling phases, which is when environmental issues are expected to arise, to ensure the environment and public health and safety are protected," Gresh said. "Once a well is in production, which the tens of thousands of conventional wells noted in the Earthworks report are, it is essentially a static operation. Wells typically operate without issue for decades. By failing to differentiate between conventional and unconventional wells in terms of inspections, and combining newly drilled wells with wells that were drilled decades ago, the Earthworks report is comparing apples to oranges and misleading the public."

Gresh added that in 2011, the department conducted inspections at 3,837 of the 4,894 unconventional wells in Pennsylvania -- a rate of 78 percent. "To inspect every active well in Pennsylvania, the commonwealth would need to employ thousands of DEP inspectors who would spend considerable time inspecting sites where no environmental issues are expected," Gresh said. "Instead, we focus our resources and efforts on the active well construction and drilling phases, which is where the focus obviously should be."

The Earthworks analysis also argued that while penalties have been increasing in many states, the sums pale in comparison with profit being reaped by drilling companies. The total amount of fines collected from 2009 to 2011 ranged from a high of $4 million (collected in Pennsylvania in 2010) to a low of $14,000 (collected the same year in New Mexico), according to the analysis. By comparison, the market value of a single gas well in Pennsylvania, the report found, was estimated to be about $2.9 million, suggesting that companies are able to simply absorb penalties as a cost of doing business, rather than alter behavior.

"In preparing to do this research, we did an initial round of discussions with former regulators and ex-industry inspectors," Baizel said. "They pretty much cut to the chase and said money matters. They told us you'll only get the industry's attention if you hurt their pocketbook, and that anything less is really just the cost of doing business to them.

"You have to have economic consequences in enforcement," Baizel added. "That was the bottom line."

Oversight of energy development has become a central issue in the 2012 presidential campaign, with the administration of President Barack Obama coming under withering attack from Republican challenger Mitt Romney for what he describes as stifling and onerous regulation of oil and gas producers. Fossil fuel producers have also redoubled advertising and lobbying efforts to unseat Obama in November.

In an energy policy white paper released last month, Romney argued that "President Obama has intentionally sought to shut down oil, gas, and coal production in pursuit of his own alternative energy agenda," and that "states have crafted highly efficient and effective permitting and regulatory programs that address state- specific needs.

"[F]rom oil and gas and coal to wind and solar and biofuels," the Republican candidate continued, "states are far better able to develop, adopt, and enforce regulations based on their unique resources, geology, and local concerns."

Baizel said the review of state policies suggests that is not the case.

"Romney needs to read the data in this report, because it doesn't support what he's suggesting," Baizel said. "The states are not able to enforce the rules as they are, so piling more on their plate is not going to get a better result." Baizel added that proper oversight needs increased cooperation among local, state and federal agencies.

In response to an email query, an aide with the Romney campaign noted that under the candidate's proposed plan to shift more regulatory responsibility to the states, federal agencies would "certify state processes as adequate" before control is transferred.

Carlton Carroll, a spokesman for the American Petroleum Institute, the largest national trade group representing oil and gas companies, said the industry was already among the most heavily regulated in the country -- both at the state and federal levels.

"Our companies comply with numerous federal statutes including the Clean Water Act, the Safe Drinking Water Act, the Clean Air Act, the Emergency Planning and Community Right to Know Act, and Occupational Health and Safety Act," Carroll said in an email. "Our companies also comply with numerous state regulations and stringent industry standards. We maintain our commitment to safety and environmental stewardship. The future of our industry and fueling America's future depends on it."

Still, the Earthworks report, titled "Breaking All the Rules," suggested that in many states, regulators are pressured to by industry representatives to rush permitting at the expense of careful oversight.

"During oil and gas booms, state agencies typically come under pressure from the oil and gas industry (as well as some elected officials) to expedite permits for drilling and other oil and gas development processes," the report noted. "By reducing the time spent on reviewing permits, agencies are less likely to consider site-specific permit conditions, which could ultimately impede enforcement actions.

"This report shows that states across the nation are betraying one of the basic agreements between government and the governed: to enforce the law," the report concluded. "That betrayal feeds into the growing lack of confidence that government should be about equal treatment and not about financial or political clout."