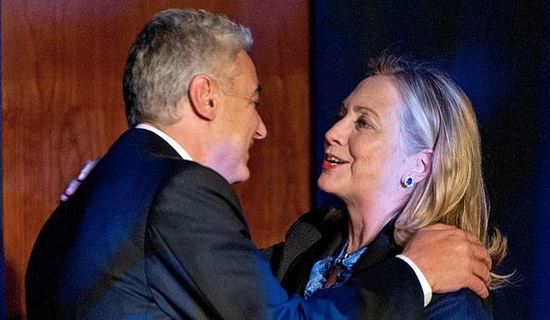 Wall Street hedge-fund billionaire Marc Lasry is one of Hillary Clinton's biggest financial supporters, and has built deep family and financial ties between himself, Obama, and Clinton. Now he is betting on a Hillary Clinton presidency, while betting the retirements of public-school teachers on a fracking renaissance.

In 2014, Lasry, founder and chair of Avenue Capital Group, raised $1.3 billion for a fund that bought loans of distressed energy companies, only to watch the debt become even more worthless. $200 million raised for the Avenue Energy Opportunities Fund came from the Pennsylvania Public School Employees' Retirement System. Lasry has shrugged off the losses, confident the good times will come again for the frackers.

"There's going to be a huge turnaround on energy," Lasry told reporters this January. The oil and gas slump has hurt exploration and production companies, but prices "will always come back. The question is, does it take six months or does it take three years?"

Meanwhile, Marc Lasry--a co-owner of the Milwaukee Bucks--has become a top contributor and bundler for the 2016 Hillary Clinton campaign. When Clinton announced her campaign, Lasry emailed his friends looking to quickly raise $270,000 with ten maxed-out contributions of $2700 each.

"It's been a long time coming, and now there's a huge amount of excitement behind her," Lasry told Bloomberg News. "You will start seeing it in the numbers as people start donating."

The exact amount of money bundled by Lasry has not been publicly disclosed; the Clinton campaign only discloses which bundlers have raised over $100,000.

"She's moving a little bit to the left, and I think that's fine," Lasry told Bloomberg in May 2015, after hosting one her first campaign fundraisers at his townhouse. "People who are giving money to her understand that. Obviously, some people have some issues. I think the vast majority won't have issues."

On February 12 of this year, Clinton came out in favor of new domestic natural-gas fracking and pipeline infrastructure. On March 31st, Clinton angrily rejected the idea that her campaign is accepting fossil-fuel money.

Lasry's investments in Clinton are both financial and familial.

Lasry's daughter Samantha was a Congressional intern for Rahm Emanuel in 2005, the future chief of staff for Barack Obama. Meanwhile, Lasry donated to Rahm's campaign.

Marc Lasry was a top contributor and bundler for Barack Obama in 2008 and 2012. Meanwhile, Alexander Lasry, his son, was a special assistant to Valerie Jarrett in the Obama White House from 2010 to 2012. Alex Lasry, like his father, is one of Hillary Clinton's "Hillblazers," having bundled over $100,000 in contributions for her presidential campaign.

Oddly enough, Lasry was also one of Donald Trump's top investors: he managed the bankruptcy buyout of Trump's casinos in 2010. He then served as the chairman of Trump Entertainment Resorts, Inc. from 2011 to 2013, with a 22 percent stake and managerial control of the Trump Plaza, Trump Marina and Trump Taj Mahal casinos.

During the same interview this January that Lasry bet that the oil and gas industry would rise again, he expressed similar confidence about his chosen candidate.

"Hillary is going to be the next president of the United States."