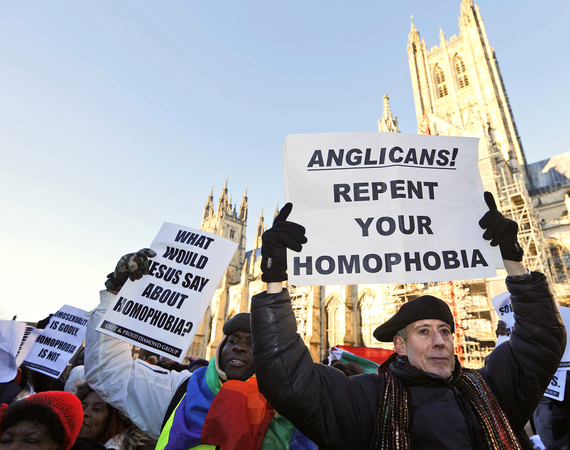 Look at medieval maps of Europe, urges Robert D. Kaplan in the Wall Street Journal (see "Resources" below) and you will be overwhelmed by the dizzying incoherence--all of those empires, kingdoms, confederations, "minor" states, "upper" this and "lower" that. It is a picture of a radically fractured world. Today's Europe is, in effect, returning to such a map. Kaplan's article is called "Europe's New Medieval Map."

The religion story of this week comes not from the north, from Europe, but from the south, from Africa, which shares with "the global South," stories of major Christian growth and energy. Leaders of the Anglican Communion, the third largest Christian "body," suspended, but did not sever, its American arm, the Episcopal Church. The suspensions resulted from disagreements over sexual issues.

Many "Communions," North and South, share such disagreements, fear schisms, and sight what the media calls "breakaway" movements which experiment with an array of structural experiments.

Some of them cling nominally to vestiges of old coherences like denominations. "Lots of luck," one must say, since that field is crowded. We read that 43,000 "denominations" mark the global Christian world already, and experts question whether the denomination as such, for all the good it did and can and might do, is tied to, not medieval, but early-modern forms.

Did you note that a) the denomination, b) the non-geographical but competitive denomination, c) "the Sunday School" and its kin, and d) "foreign missionary agencies" were very creative responses when "the medieval map" was demonstrating incoherence? These inventions were inspired by what Americans call "separation of church and state," religious freedom, radical individualism, and voluntary gatherings designed to further Christian causes.

While we see visionary and consecrated people serving well through the inherited forms, we can also see their limits.

In the northern world, the "breakaway" church movements, mega-churches, advocacies of post-modern and post-secular theologies, adaptations to pop-cultures, devotion to the passing parade of Christian celebrities, etc., for all their value, strike the map-makers as new "dizzying incoherences." In the southern world, these moves and movements are replicated or issue from the inventiveness of native Christian experimenters who want to give, not take, lessons from the North.

Where often exported Euro-American churches in Africa, Asia, and elsewhere, once provided the appearance of the non-dizzying coherence of Catholic, Orthodox, and Protestant worlds, today especially Pentecostal and Charismatic movements within, at the edges of, and beyond the imported forms often prevail. Neither those nostalgic for old forms nor utopians who hope for so much from the new have the future to themselves, and contention among them may add to "dizzying" incoherences.

But, "wait a minute," say theologians, historians, and the faithful at large, maybe we are seeing a redrawing not of Kaplan's "Medieval Map," but some sketching of the "Early Christian Map." No. One does not have to be a primitivist who argues for a coherent replica of a united Church in its first centuries, or a generalizer about early Christian unity, now lost.

Any reading of the New Testament and other charters from those early centuries shows tensions, schisms, breakaways, arguments, as vehement and violent as any post-modern or post-secular movements and moments reveal. Yet not a few believers will even see signs of life that are missing in over-coherent Old North Christianity. Still others will see signs of life that are present also in its parts of the globe.

We will not lack signs worthy of sighting any time soon.

The communiqué released to the media on January 14, 2016, by the Anglican Communion Primates to explain their decision to censure the U.S. Episcopal Church appears on the Primates 2016 website: http://www.primates2016.org/articles/2016/01/14/statement-primates-2016/.

Yong, Amos. The Spirit Poured Out on All Flesh: Pentecostalism and the Possibility of Global Theology. Grand Rapids, MI: Baker Academic, 2005.

Image: Human rights campaigner Peter Tatchell, right, demonstrates with others in front of Canterbury Cathedral in Canterbury, England, Friday, January 15, 2016. They were protesting the decision by religious leaders of the Anglican Communion to bar members of the U.S. Episcopal Church from policy-setting positions for three years as punishment for their acceptance of same-sex marriage. Credit: Frank Augstein / AP Photo.