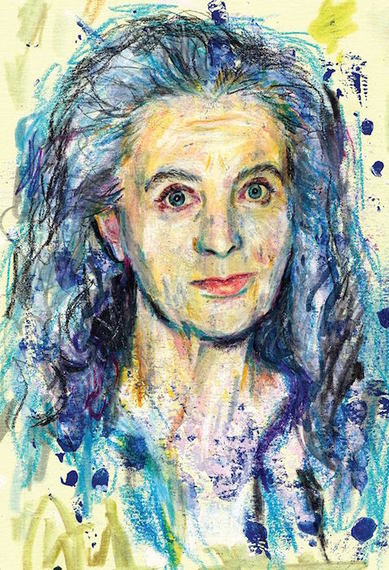 Tracey Emin and Kiki Smith have starkly different visual approaches in their art yet thematically their work is inextricably intertwined. Both women eschew the expected and express different aspects of both the feminine psyche and life itself in unpredictable ways. Emin is radical about love; Smith about life and death. Their work is often both precious and difficult to stomach (think Emin's blankets and Smith's statues excreting beads). They are provocative, evocative and not afraid to expose themselves -- a raw honesty radiates throughout their work that is rare to find.

This honesty manifests itself as Emin cries out for intimacy by exposing details of her private life that others wouldn't dream of revealing. In a letter that accompanies My Abortion 1990 she recounts the moment when, in a London taxicab, her body expelled a second fetus, overlooked during the initial procedure, "I had killed the thing which I could love the most. Forgive me, tiny little thing... Forgive me -- leave me."

Smith is honest in her portrayal of the female form in unconventional ways -- often from the inside out, neutralizing it so that it stands for mankind as a whole, challenging the tradition of male artists to paint the female in an erotic light. In How I Know I'm Here, a massive linocut, Smith depicts several internal organs, including a heart, brain, lungs, and reproductive systems splayed out around etched lines that represent her own feet, face and hands. Although Smith's work can be seen as rather feminist, honing in on this as a political statement can be a mistake, or at least a dangerously narrow view. Her approach is far more personal -- she explores the significance of how the body functions systemically in order to gain a stronger grasp on reality.

Smith's probing stops at no bounds and delves into the human body's most intimate inner functions -- urination, menstruation, reproduction, and so on. She creates statues excreting bodily fluid in the form of beads. By making urine or menstrual blood beautiful, Smith probes at our societal reaction to such things. She also emphasizes the lack of importance we normally attribute to these fluids by placing them on an altar in jars with gothic lettering, each fluid in equal standing.

Emin does not shy away from the exploration of the significance of bodily fluids either, confidently displaying used tampons alongside her sketches giving the two equal importance. In My Bed, Emin displays her bed after a depressive episode, covered in suspicious stains and leaked menstrual blood in all its glory.

For Smith and Emin, the body is in perpetual motion. Neither artist has any shame in laying the ghastliest aspects of femininity stripped bare. This introspection strips their work of pretense down to an almost primeval level. The exposure of the self creates a vulnerability that leaves the work open to interpretation.

This vulnerability is also reflected in the use of humble craft materials. Smith uses papier-mâché for many of her sculptures and Emin uses appliqué techniques and household fabrics to create her patchwork quilts. The lack of durability of these materials as compared to that of objects like bronze sculptures creates a sense of urgency that reflects their need to create their art -- to express something physically that has been building up inside. Emin's tapestries show fragmented sentences; often just words, names or phrases. Smith's works consist of fragmented body parts, with no logical context in the body from a biological standpoint, with the spleen and bladder displayed next to the more socially glorified heart and brain. These fragments add to this sense of urgency, as both artists emphatically express that nothing lasts forever.

The exploration of the ephemeral is so honest and pure in Smith's work that her art can be difficult to write about. She is not trying to make a statement. Instead she follows whatever is preoccupying her at the moment without necessarily knowing why. "I don't want to be trying to do anything," Smith says. "When I was younger, people's work was so expressionistic that to me it felt indulgent or self involved." Based on this view Smith may not be a fan of Emin's work, which is often self-indulgent. Emin is this big, booming voice that is deliberately loud because she desperately wants to be heard. Yet the honesty still permeates through Emin's willingness to be open about a past as she sees it, inspiring the viewer to look back to the events that brought them into their present state of existence. Smith may be better at playing the innocent, but she also questions the nature of our existence through her exploration of life, death and the existential.

The autobiographical component in both artists' work allows them to question our existence from a personal level, where they each recognize their own struggle. Emin uses her confessional art to deliberately bare her soul on canvas so that the spectator feels that they immediately know her on an intimate level. Her honesty supersedes the unfamiliar and this is what makes her art beautiful. Smith often features her self in her work, literally and physically. She is the first to admit this: "My work was very autobiographical. In the pieces about birth I was trying to reconcile an ambivalent relationship to being here on earth because earth is a difficult place to be sometimes." Emin and Smith both create art through this therapeutic method of working out on canvas whatever is preoccupying their minds at the moment. Smith has said, "I'm just trying to make my life okay. I'm just trying to have a good life; that is my ambition: to be better at being here." Emin speaks of art as her raison d'être, as something that has saved her life many times. To this, Smith would agree, "You know, we're not doing research; our lives are at stake."