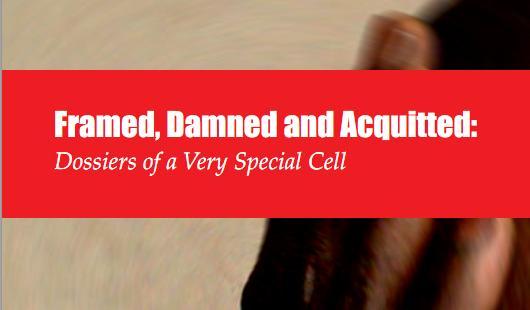 The report, "Framed, Damned, Acquitted," by the Jamia Teachers' Solidarity Association*, documents 16 cases where those arrested by the Special Cell of Delhi Police in India were accused of being operatives and agents of various terrorist organizations -- like Al Badr, HUJI, and Lashkar -- and charged with crimes against the state: sedition, war against the state, criminal conspiracy, planning and causing bomb blasts, training of terrorists, collection of arms, ammunition and explosives, and the transfer of funds for terrorist activities. The penalties demanded by the police and prosecution in these cases were, correspondingly, the most severe: in most cases, life sentence or the death penalty.

Through detailed analysis, the report documents the manner in which false charges were filed against these men, the extra-judicial immunity enjoyed by the "Special Cells" and the country's elite counter terrorism unit's role in manufacturing stories of guilt.

The report draws primarily on the court judgments, media reports of the arrests and the trials that followed.

The acquittals resulted were not simply for want of evidence. Court judgments in all these cases note the manner in which the "evidence" provided by the police and the prosecution was tampered with and fabricated.

The narratives presented by the prosecution, the report argues, were consistently unreliable and appeared to be fabricated.

The reports systematically lists legal findings that have indicted the Special Cell for framing innocents; reprimanding them for violating due process and fabricating evidence; ordering the Central Bureau of Intelligence (CBI) to probe the actions of the Special Cell; as well as directing legal prosecution and initiating of departmental enquiries against them.

Acquitting an alleged terrorist of the Peoples' Liberation Army in Manipur, the Court concluded, "the police got him targeted to become a victim of this crime."

In another instance, the Court in the Dhaula Kuan fake encounter case opined that, "there cannot be any more serious or grave crime than a police oﬃcer framing an innocent citizen in a false criminal case. Such tendency in the police oﬃcers should not be viewed or dealt with lightly but needs to be curbed with a stern hand."

The CBI investigating the apprehension of alleged operatives of Al Badr by the Special Cell concluded that evidence was fabricated and sought "legal action against Sub-inspector Vinay Tyagi, Subhash Vats and Ravinder Tyagi."

Despite chastising by the courts, the report argues that police officers mentioned in these trails remain at large, and have not been prosecuted. On the contrary, these officers have been promoted through the ranks, some have become recipients of gallantry awards and the president's medals, and many continue to hold positions of power. The accused in these 16 cases were all acquitted. All these men were illegally detained for varying amounts of time and tortured during incarceration. Some cases like that of Md. Amir Khan, despite the lack of evidence, his incarceration lasted for 14 years.

Each exoneration brings to light the terrible injustice, and tremendous suffering of family members, who additionally suffered the stigmatization of being associated with "terrorists." Some families went bankrupt fighting for their release, children had to abandon their studies and some parents died in grief and despair.

The Indian press was equally complicit, which more often than not, tilted heavily in favor of the State. Almost without exception, the press acted as "faithful stenographers" of the police; not only presuming the guilty to be innocent but also failing to follow cases where innocence is established. The report reproduces the reportage that appeared at the time of arrests in as many cases as possible.

Despite this pattern of abuse of power and miscarriage of justice, there has been no apology or rehabilitation.

Legal action has not been pursued against officers who are guilty of framing and illegally implicating these men.

The 16 cases we present here are only the proverbial tip of the iceberg, and simply indicative of the extent of the malaise affecting our policing and criminal justice system.

*This report was produced Jamia Teachers' Solidarity Association is a collective of university teachers, formed in the aftermath of the Batla House 'encounter' in 2008. Though initially focusing on the demand for a judicial probe into the Batla House 'encounter', JTSA has emerged as an important voice arguing for rule of law, and against illegal detentions, encounter killings, and communal witch hunts by anti- terror agencies. JTSA conducts fact-findings, investigations, publishes reports, engages in legal aid work as well as collaborates with a range of civil society groups on issues of democracy, justice and civil rights. For more on the activities of J T S A, visit www.teacherssolidarity.org