The preliminary results of France’s first round of presidential elections are in, and independent candidate Emmanuel Macron and far-right National Front leader Marine Le Pen appear set to face each other in the runoff on May 7.

Early projections on Sunday predicted Macron would win with 23.7 percent of the vote and Le Pen would take home 21.7 percent. Far-left candidate Jean-Luc Mélenchon and conservative Republican party leader Francois Fillon were narrowly edged out of the final round. Those numbers were early estimates released after polls closed at 8 p.m. local time. Final results are expected later this evening.

“The French have expressed their desire for change. We’re clearly turning a page in French political history,” Macron said of the early results in a statement to Agence France-Presse.

“The great debate will finally take place. The French must seize this historic opportunity,” she tweeted.

People around the world are watching the election as a litmus test of just how influential the strains of populism and nationalism in Europe have become.

The threat of terror and a lack of jobs have fueled distrust in the government and reinvigorated a vicious debate about immigration and national identity.

But the vote is just as much a test for the future of Europe. Compounding France’s internal challenges are the rise of populism and the rejection of establishment politics in places like Britain and the United States. Trust in the European system has eroded, and proposals to depart the European Union have become en vogue for populist candidates across the continent.

French candidates and politicians reacted almost immediately to the results, and many called for the country to rally around Macron in the second round.

Conservative candidate Fillon, while giving his concession speech, called on supporters to vote for Macron. Ruling Socialist party candidate Benoit Hamon, also threw his support behind Macron in light of the results.

France finds itself at somewhat of a crossroads in its political history. Working-class voters are struggling with high unemployment and an economy that hasn’t fully recovered from the European debt crisis. Several French cities are reeling from recent deadly terrorist attacks. Just on Thursday, a 39-year-old French national killed one police officer and injured several more on Paris’ Champs Elysées, in an incident that the self-described Islamic State took credit for shortly after. French authorities foiled yet another attack in the city of Marseille earlier last week.

Following the Champs Elysées attack, President Donald Trump predicted that the shooting would have a “big effect” on the election. Le Pen gave a speech in which she vowed to protect France. Fillon also sought to position himself as tough on terror following the attack, saying that fighting “Islamist totalitarianism” needed to be a priority for the government.

But despite the hard-line rhetoric, the attack did not appear to shift voting patterns. The early results mostly reflected polls before the attack, and neither Fillon nor Le Pen gained a boost that propelled them into first place.

Security fears still loomed over France on Sunday as citizens voted, however, and a polling station in the eastern town of Besancon was evacuated after a stolen vehicle was reportedly abandoned nearby with its engine still running.

President Trump suggested that he was keeping a close eye on the election, tweeting that it was “very interesting.”

As of early evening on Sunday, turnout was down around 1 percent from the 2012 election. French citizens abroad also voted over the weekend, forming long lines at polling stations in a number of major cities across the globe.

The campaign itself was marked by scandal, surprises and upsets at every turn.

First, President Hollande announced he would not seek re-election. Then, former President Nicolas Sarkozy failed to win his party’s nomination when Fillon, who served as prime minister from 2007 to 2017, beat him in the primaries.

The conservative Fillon was a likely front-runner, appealing to right-wing voters with a pro-business and socially conservative platform mixed with anti-immigration and anti-Islam views. But a series of scandals, including allegations Fillon had paid his family members to work as parliamentary aides, caused his support to plummet.

As Fillon’s star faded, Macron’s rose. A relative political novice, Macron founded his own political party, En Marche! (which translates roughly to “Onward!”). After leaving investment banking in 2014, he served as Hollande’s economic minister until deciding to run for office last year. Unlike Le Pen, Macron is pro-E.U. and pro-immigration.

For Le Pen, the election is the ultimate test of her efforts to bring the extreme-right National Front into the mainstream.

Le Pen took over the party’s leadership from her father, Jean-Marie Le Pen, and has worked hard to clean up its image. She remains vehemently anti-immigration and has vowed to hold a referendum on France’s membership in the European Union if elected.

Le Pen is also an open admirer of Russian President Vladimir Putin. During a visit to the Kremlin last month, she called sanctions against Russia “silly” and reiterated her desire for closer ties with Russia. Faced with declining polls in recent weeks, Le Pen has made a sharp turn to the right and intensified her anti-immigrant rhetoric.

For months, polls have been leaning in favor of a runoff between Le Pen and Macron, putting Le Pen’s presidential dream within reach. And she’s managed to harness the youth vote: An Ifop survey last month revealed that 39 percent of French voters between the ages of 18 and 24 back her.

But the far-left Mélenchon, 65, threw a major curveball by soaring to prominence in the final stretch of the race.

He views himself as a patriot who wants to end austerity and boost the economy with a giant stimulus package while also reducing the workweek to 32 hours. Like Le Pen, he opposes E.U. and various other international institutions, including the World Trade Organization.

This story has been updated as polls close in France.

CORRECTION: An earlier version of this article misidentified the gunman who shot two police officers along the Champs Elysées as Belgian; he was French. 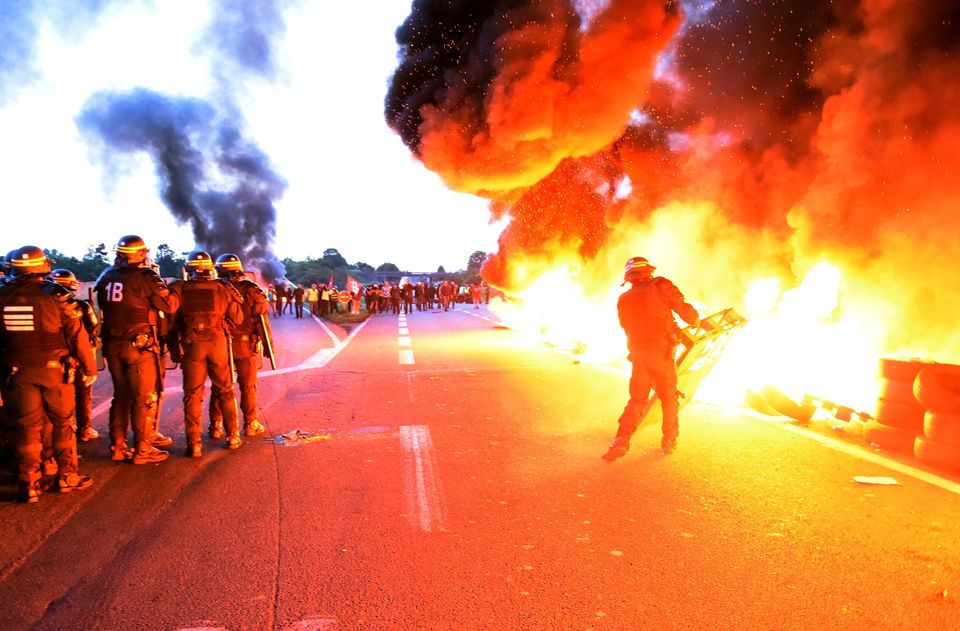