PARIS, April 10 (Reuters) - A gay man beaten up in Paris this month is using a photo of his injuries to fuel a growing protest for equality, as a divisive reform bill to allow same-sex marriage in France drives a spate of homophobic attacks.

A photo taken of Wilfred de Bruijn's battered and bruised face shortly after he was kicked unconscious by unknown assailants has gone viral on the Internet this month.

"Sorry to show you this. It's the face of Homophobia," de Bruijn wrote above the image posted on his Facebook page on Sunday. It has been shared nearly 8,000 times since then.

De Bruijn, a Dutchman resident in Paris for a decade, told France Inter radio on Wednesday that he had "no doubt" that an assault on him and his boyfriend, who was punched in the face as they walked arm-in-arm, was a homophobic attack.

Gay rights issues have divided France in recent months as President Francois Hollande has pushed through a bill to legalise gay marriage despite angry street protests.

The law, backed by two in three people in surveys, is set to pass without major hitches in a parliament where Hollande's Socialists have a majority.

Yet a passionate debate, particularly on whether same-sex couples should have parenting rights, has triggered a surge in verbal and physical attacks on the gay community, according to records kept by the campaign group SOS Homophobie.

The group has recorded more than 60 reports of homophobic attacks, two to three times higher than normal, in the past week as the bill makes its final passage through the Senate.

"It feels like the most violent time in our history," said Michael Bouvard, vice-president of SOS Homophobie.

On Sunday night, a hall used during the day for a festival of lesbian, gay and transgender associations in the gay-friendly Marais district of central Paris was vandalised and plastered with posters for the vocal anti-gay marriage lobby.

The "Protest for Everyone" movement, led by the comedian Frigide Barjot, has united tens of thousands of Roman Catholics, evangelical Christians and Muslims.

De Bruijn said the heated nature of the debate was encouraging violence.

"It wasn't Frigide Barjot who hit my boyfriend, but you can't ignore the narrow-minded speeches being made," he said.

France, traditionally Catholic and socially conservative, is opening up slowly to acceptance of gays and lesbians, with a trickle of public figures now openly homosexual.

The law giving same-sex couples the right to marry and adopt children is now being debated in the Senate after being adopted by the lower house in February after 110 hours of debate.

It was due to be among several dozen lesbian, gay, bisexual and transgender groups staging a demonstration against homophobia in front of Paris' town hall later on Wednesday.

In cyberspace, de Bruijn has stepped up his own protest, posting a stylised black-and-white poster version of his photo with details of Wednesday's rally and the slogan: "Fight back". (Reporting by Tara Oakes; Editing by Kevin Liffey) 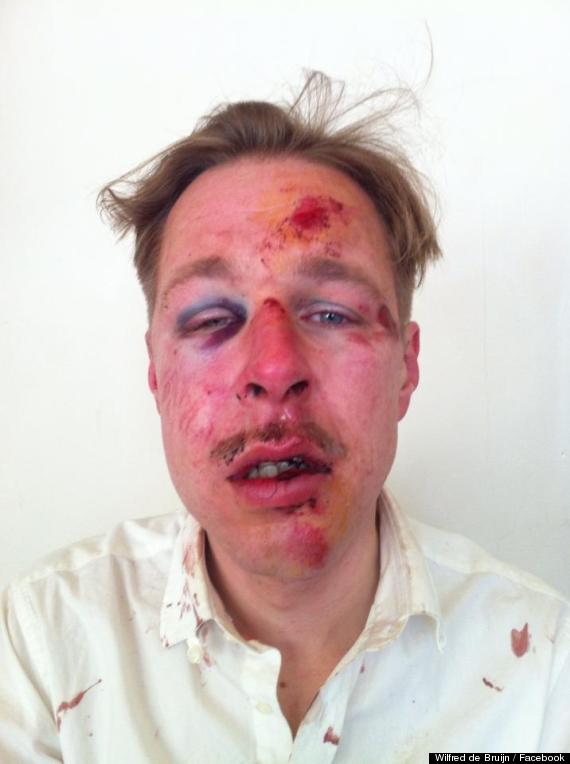