JERUSALEM, Jan 27 (Reuters) - At a busy supermarket in Jerusalem a smartly dressed woman, recently arrived in Israel, was stopping shoppers to ask if anyone spoke French. Having found a candidate, her first question was: "Where's the cheese counter?"

For Jews coming to "the Jewish state" from all corners reached by the diaspora, the move may bring relief, but it also raises challenges: a new language and culture, unfamiliar social codes and the difficulty of finding a job -- let alone a cheese counter, something uncommon in Israel.

With anti-Semitism rising in France, and their worries stoked by this month's killing of four Jews in a kosher supermarket in Paris, French Jews now make up the largest group of new migrants to Israel, nearly a third of all arrivals.

While it may not match the mass waves of migration that helped build the country in the years after its 1948 founding, or those that followed the Soviet Union's collapse in the 1990s when more than one million people came, Aliyah remains a central plank of Israeli policy and a driver of its demographics.

Over its history, Israel has drawn in 3.6 million Jews from more than 90 countries, helping to fuel rapid growth in the economy and the population, which now stands at more than 8 million, 80 percent of whom are Jewish.

Given the vast influx, authorities are accustomed to absorbing and integrating large numbers quickly, whether they originate from Ethiopia, France, Russia or the United States. It's the migrants themselves who have to work hard to adapt.

Many young graduates and professionals arriving for the first time head straight for Ulpan Etzion in Jerusalem, the original residential school and absorption center that has taught Hebrew to tens of thousands of arrivees since 1949.

As well as learning Hebrew in just five months, students build a social network among their classmates, nearly all of whom are single and must be aged 22-35. Engagements and marriages are common.

"In many cases they are leaving everything behind: career, friends, family, weather, culture," says Baruch Kostsewa, the director of the center, which is part-funded by the Jewish Agency, a non-profit dedicated to migrating Jews to Israel.

"It's not easy for people to make the transition."

A large number of the current class of 250 are French. They cite the steady rise of anti-Semitism in their birth country as the spur for them to move. While around 500,000 Jews remain in France, there are now 220,000 in Israel.

Besides the Paris killings, people recall the attack on a Jewish school in Toulouse in 2012, and the kidnapping, torture and death of Ilan Halimi, a French-Moroccan Jew, in 2006.

While there is relief at being able to wear a Star of David or a kippah in Israel without fear, there is keen awareness too of the challenges related to finding work and coping with the high cost of living, the insecurity created by the conflict with the Palestinians and the brusque manner Israelis can have.

"It's a new mentality, a different one from Europe," said Avigail, a 24-year-old from Paris with a masters in politics and international affairs who declined to give her family name.

"I know in Israel it's difficult and salaries are sometimes lower. But I feel this is my nation and I've come to be part of it. I'm more open-minded about my career choices now."

Michael Gorelashvili, a 34-year-old dentist from Tblisi, Georgia, took a series of exams to transfer his qualifications to Israel. While he is now free to practice most dentistry, he is not allowed to do orthodontics. Doctors trained in the former Soviet Union face similar hurdles, while those qualified in Europe or the United States have an easier transition.

"It's a very big challenge," he said. "But at least here the salaries for dentists are higher than in Georgia."

PETANQUE BY THE SEA

Netanya, a city of 180,000 on the Mediterranean north of Tel Aviv, has become the semi-official capital of Israel's French community, with patisseries, cafes and several French-dedicated estate agencies. There is even a boules club in a local square.

Many French Jews came in retirement for the sun and sea and don't even speak Hebrew. Some still return to France regularly or even semi-commute - earning the label "Boeing Aliyah."

That's in stark contrast to the focused approach being taken by younger French, Russian and British arrivals who have come to build a new life.

Jerome Bonnenfant, 38, moved with his wife and family two years ago and has set up a patisserie in the center of town, where he grappled with bureaucracy to set up his business.

"I thought it would be easier than it's been," he said. "It's been hard, you've really got to stick at it."

Back in Jerusalem, Yonathan, a 33-year-old legal trainee from Nice, explains how he planned his Aliyah minutely, organizing an apartment and job in advance, aided in part by a sister who had already made the move.

Still, he thinks it will take two years to make the transition in full.

Kostsewa, the director of Ulpan Etzion, who has handled thousands of new migrants and promoted Aliyah in Australia and the United States, is straight-forward about the difficulties.

"This may be the Promised Land," he said, "but it doesn't come with a guarantee." (Writing by Luke Baker; Editing by Sophie Walker) 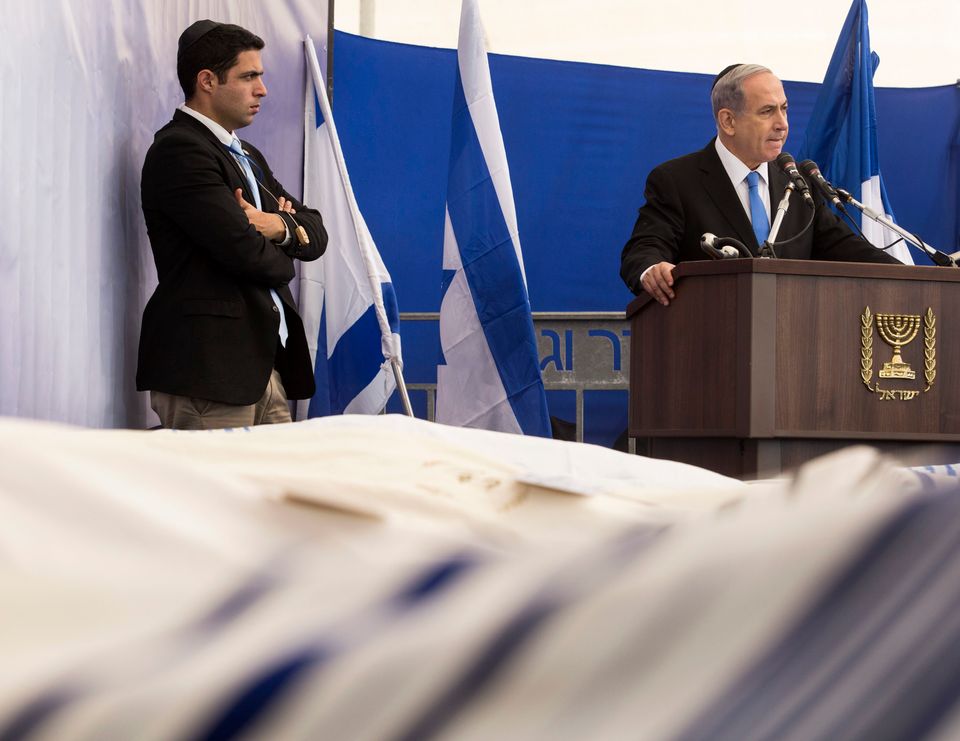 1 / 14
Israeli Prime Minister Benjamin Netanyahu delivers his eulogy behind the four bodies, covered in prayer shawls, of the Jews killed in the Paris kosher supermarket, Yoav Hattab, Yohan Cohen, Francois-Michel Saada and Phillipe Braham, lined up in front during the funeral ceremony in a Jerusalem cemetery, Tuesday, Jan. 13, 2015, before the bodies are removed and taken to graves for burials. (AP Photo/Jim Hollander, Pool)
ASSOCIATED PRESS