A siege at a kosher market in Paris left several people dead including the gunman on Friday, causing many French Jews to be on heightened alert in the wake of Wednesday's attack on satirical newspaper Charlie Hebdo.

In an address to the country, French President Francois Hollande called the attack an "appalling anti-Semitic act," and social media users around the world tweeted #JeSuisJuif -- "I am Jewish" -- in a display of solidarity.

Police ordered shops in the Jewish neighborhood of Marais in central Paris to close Friday afternoon as the hostage crisis continued. The Grand Synagogue of Paris also shut down for the day, USA Today reports.

Despite increased security, many continue to feel unsafe. Sacha Reingewirtz, president of the French Jewish Student Union, told USA Today, "What the government is doing to protect us is not enough. I refuse to have Jews here living behind walls in fear of their lives."

Stephen Pollard, editor of The Jewish Chronicle, expressed similar concerns on Twitter saying on Friday, "Every single French Jew I know has either left or is actively working out how to leave."

Up and down the country, at Shabbat dinner, I'm sure one topic of conversation tonight will be 'Are we safe here?'.

France's Jewish community was already on high alert after the Wednesday attack on Charlie Hebdo, which left at least 12 dead. Chlomik Zenouda of the National Bureau for Vigilance against anti-Semitism (BNVCA) told JTA on Thursday that many Jewish institutions and neighborhoods with large Jewish populations were witnessing an increase in police protection, and volunteers were taking it upon themselves to provide security at synagogues and Jewish schools.

“We are past red alert at this stage, it’s all hands on deck because, sadly, the question is not whether the French Jewish community will be targeted, but when,” Zenouda said.

These concerns existed long before Wednesday's attack, however, Director of AJC Paris Simone Rodan-Benzaquen noted in an email to The Huffington Post. Referring to the 2012 attack on a Jewish school in Toulouse and the ongoing incidents of violence against Jews and synagogues in Paris, Rodan-Benzaquen said "the threat has been present and palpable."

A 2013 study released by the European Jewish Congress and Tel Aviv University found that the highest number of anti-Semitic attacks reported that year had occurred in France, where Jews make up about 1% of the population but 40% of the victims of racist violent attacks.

In June 2014 Chief Rabbi of France Haim Korsia said rising anti-Semitism was causing an exodus of large numbers of French Jews. Jewish Agency chairman Natan Sharansky told The Jerusalem Post on Tuesday that roughly 50,000 inquired with his organization for information about immigrating to Israel in 2014.

Aliyah and Immigrant Absorption Minister Sofa Landver said in December she expected more than 10,000 Jews from France to immigrate to Israel in 2015.

The attack on Charlie Hebdo should signal the need for widespread change, Rodan-Benzaquen said.

"While we praise the authorities for speaking out and making the fight against antisemitism a priority, much more needs to be done. We have warned that the menace of rising anti-Semitism threatens French society at large. The Charlie Hebdo massacre makes clear that the war against France’s democratic values is in high gear." 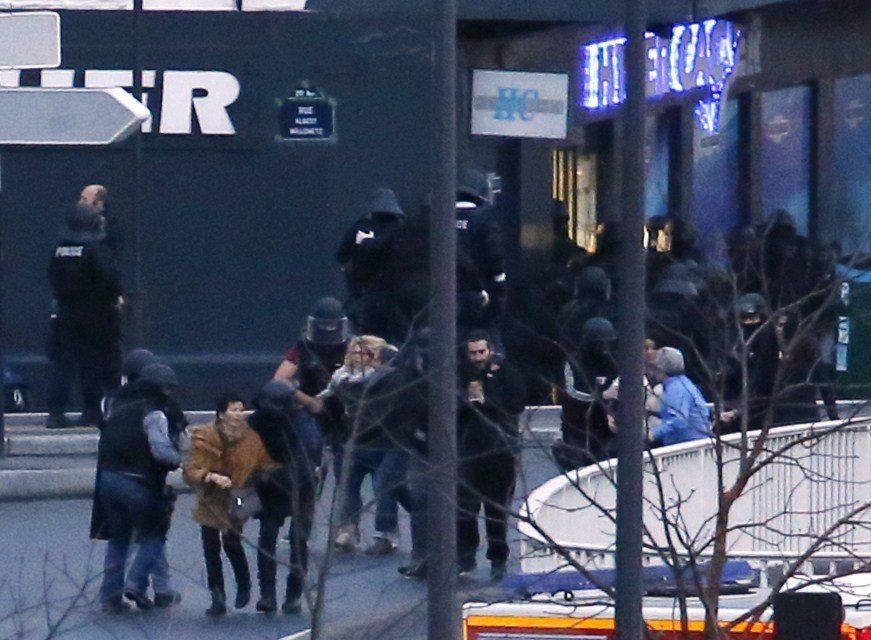 1 / 14
Members of the French police special forces evacuate the hostages after launching the assault at a kosher grocery store in Porte de Vincennes, eastern Paris, on January 9, 2015 where at least two people were shot dead on January 9 during a hostage-taking drama at a Jewish supermarket in eastern Paris, and five people were being held, official sources told AFP.
THOMAS SAMSON via Getty Images