One is hard-pressed not to cringe when hearing the moral outrage over the recent coup d'etat in Niger that has been exuding from the mouths of French officials as of late. Not to say the distress itself is not genuine, however, the principles espoused are not quite as altruistic as advertised, because it doesn't take much effort to realize the French care much less about the human rights of Niger's citizens than they do about the yield of Niger's uranium deposits.

France was one of the first countries to come forward and condemn the military junta which toppled President Mamodou Tandja's regime on February 18th, replacing it with the Supreme Council for the Restoration of Democracy (CSRD). Soon after the struggle was complete, a spokesperson from the French government officially expressed their deepest concern for the plight of all Nigeriens:

"France calls for all parties to show responsibility in the interests of their country and the people of Niger."

Ah yes, the people of Niger.

It's hard to swallow that France and the rest of the international community are truly concerned that the people of Niger might suffer from a sudden and ghastly dearth of representative government, considering Niger doesn't quite have the track record as some paragon of democracy.

The country's corrupt President, who one could rightly label now as "outgoing," was driven by such power hunger he amended the constitution through a fraudulent referendum in order to remain in office beyond his December, 2009 term limit. When Tandja's ambitions were checked, he did what any freely-elected democratic leader would do -- he simply dissolved the parliament and the country's Constitutional Court, actions that run counter to any deep faith in the consent of the governed.

While it's highly doubtful a military junta that seizes control via a violent putsch will implement a government for the people and by the people anytime soon, it's beyond reason to fret over the unseating of a very undemocratic tyrant. Tadja is also the latest victim of history's irony, because in 1974 Mr. Tandja himself had been an active participant in overthrowing the government, and subsequently, a proud member of the post-coup Supreme Military Council.

The United States, doing their part to add even more irony, has been hankering to slap sanctions on Niger to protest the violent takeover by the CSRD. Yet, they tread lightly, realizing in December they suspended millions of dollars in aid to Niger because they feared President Tandja was consolidating power. Many world leaders are unsure that the situation will necessarily be worse under the new administration, which claims it wants to install democracy.

However, the truth of the matter is that all of the stakeholders involved would rather see a stable despot at the helm rather than an unpredictable group of revolutionaries who could threaten the security of Niger's uranium mining operations.

This is precisely why the "love of the people" rationale just doesn't add up compared to the way in which France's investments do, because Niger provides up to 40 percent of France's uranium consumption, making it quite the strategic interest when weighing the fact that 76% of the country's energy is derived from nuclear power. 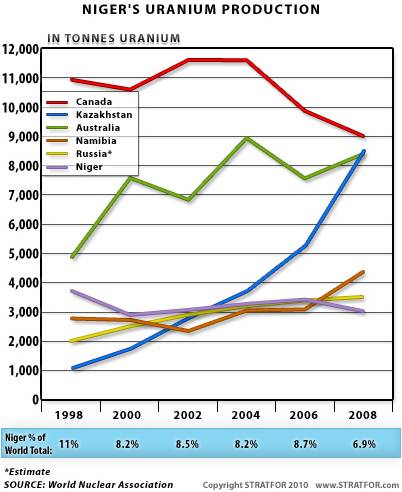 Not only that, but the French state-owned nuclear power company Areva operates two major uranium mines in Niger which produced 3,000 metric tons in 2008, which is roughly 7 percent of world output. Areva also invested $1.5 billion to secure the rights to another massive deposit, which, when it begins production in 2012 is expected to produce 5,000 metric tons of uranium a year.

And if one thinks the French Republic will sit on the sidelines while freedom-loving people are in danger of losing freedom, think again. According to STRATFOR Global Intelligence, reports have surfaced that if the junta, for whatever reason, takes a hostile policy toward France, Paris would not hesitate to deploy forces to impose its will and protect its interests. This wouldn't be too difficult a task, with French troops already stationed in Senegal, Gabon and Cote d'Ivoire.

After taking all of this into consideration it is becoming clearer that the enemy in this case is not tyranny or oppressive governance, but instability. And once one sees through the transparently deceptive rhetoric, it is quite clear that instability is the enemy not because it threatens the inalienable rights of Nigeriens, but because it threatens the economic interests of the French.