Just three days before the French would cast their votes in the first round of an election with potential drastic effects for the future of the country, a French national from an eastern Paris suburb shot dead a policeman and wounded two others on Paris’ famed Champs Elysées.

The gunman, identified as 39-year-old Karim Cheurfi, was well known to authorities and had been arrested earlier this year, suspected of planning an attack on police. The so-described Islamic State was quick to claim responsibility for the shooting, although it remains unclear to what extent the militant group was involved.

France was already on heightened alert that week. Last Tuesday, in the port city of Marseille, authorities detained two young men, both French nationals, suspected of planning to carry out a violent attack related to the presidential campaign. Police found guns and bomb materials, as well as a video in which one of the men claimed allegiance to ISIS.

Le Pen doubled down on her anti-immigration argument, vowing that if elected she would reinstate border checks and expel foreigners who are on the watch lists of intelligence services. Fillon, who had steered to the right throughout the campaign hoping to woo some of Le Pen’s supporters, said the fight against “Islamist totalitarianism” should be at the top of the next president’s list of priorities.

Even U.S. President Donald Trump weighed in. “Another terrorist attack in Paris. The people of France will not take much more of this. Will have a big effect on presidential election!” Trump tweeted on Thursday.

But in fact, last week’s attack and arrests had little or no effect on the results in the first round, according to previous poll predictions, and experts say that should come as no surprise.

“I don’t think that attack had any electoral effect,” Mabel Berezin, a professor at Cornell University who writes on European politics, told HuffPost on Monday. “The polls were remarkably consistent.”

With 97 percent of votes counted, centrist candidate Emmanuel Macron decisively won Sunday’s first round with 23.9 percent of votes. Macron will meet hardliner Le Pen in the runoff on May 7. Le Pen took home 21.4 percent of the votes. Conservative Fillon and far-left candidate Jean-Luc Mélenchon were eliminated, with 19.9 and 19.6 percent respectively.

The results were in line with predictions prior to the terror incidents. An Ipsos poll released 10 days ahead of the vote, predicted Macron and Le Pen would each win around 22 percent, Mélenchon 20 percent and Fillon 19 percent.

While some research suggests that conservative or right-wing parties could benefit at the polls following terror attacks, Ignacio Lago, an associate professor of political science at Universitat Pompeu Fabra, told HuffPost that only a few of the variables that usually play a role in shifting public perception actually applied to France’s case.

Lago pointed to three main factors. First, research suggests voters usually rally around the flag after a terror attack, and that effect generally benefits the incumbent, regardless of his or her political affiliation. “Terrorist attacks are good for incumbents, that’s the rule,” Lago explained.

Think back to November 2015, when a group of gunmen stormed bars, restaurants, a soccer stadium and a concert hall across Paris in an ISIS-plot, killing up to 130 people. President François Hollande, who was deeply unpopular at the time of the attack, saw his support grow in the aftermath.

Secondly, Lago says, how an incumbent responds to the tragedy is a critical factor in voters’ opinions. When the Spanish ruling party initially responded to the 2004 Madrid terror attack by mistakenly blaming Basque separatists, rather than al-Qaeda, voters turned against them at the polls.

In France, incumbent President Hollande was not running, nullifying both the rallying effect and the importance of his response.

Thirdly, size matters. While a tragic event, the extent of Thursday’s shooting in Paris was small compared to some of the massive attacks France has suffered in recent years. Since January 2015, individual terrorists and groups of militants have attacked the offices satirical weekly newspaper Charlie Hebdo, killing 12 people; taken hostages at a kosher supermarket, killing four; carried out a large coordinated assault in Paris, leaving 130 dead; attacked the home of a policeman, killing him and his partner; and mowed down at least 84 people celebrating Bastille Day in the southern city of Nice.

“At a certain point with these collective traumas … you reach a kind of threshold and people have taken their emotional position on it.” Berezin, the Cornell University Professor, said.

Finally, the frequency of threats also played a role in the way voters responded at the polls on Sunday. Professor Christophe Chowanietz, an expert on France’s response to terrorism, suggested in a 2009 University of Montreal research paper that there’s less of a rallying effect if attacks occur on a regular basis. Opposition parties will begin to openly criticize the country’s leaders for failing to stop repeated attacks.

In the case of France this week, Chowanietz said, criticizing the government’s approach to the attacks did not win the candidates an edge over one another. “The incumbent isn’t running, so you can’t score points attacking Hollande for not keeping France safe. He doesn’t care, he’s out of a job in five weeks anyway,” Chowanietz said.

Instead, candidates like Le Pen and Fillon hammered voters with their own plans for addressing security, but few of those proposals were actually new to voters. In addition, there were serious questions whether border controls, like Le Pen would like to see, would do much to stem the tide of attacks by radicalized French nationals. “It becomes empty rhetoric: close the borders and things like that. It’s nothing new,” Chowanietz said.

Le Pen and Macron will face off in the final round of voting on May 7 and while France’s security and history of terror attacks will be an issue for the campaigns, analysts say it would take a much larger terror attack to have a chance at swaying the vote.

“Had it been a massive attack where 10, 20 people were killed then the dynamic could have been different,” Chowanietz said. 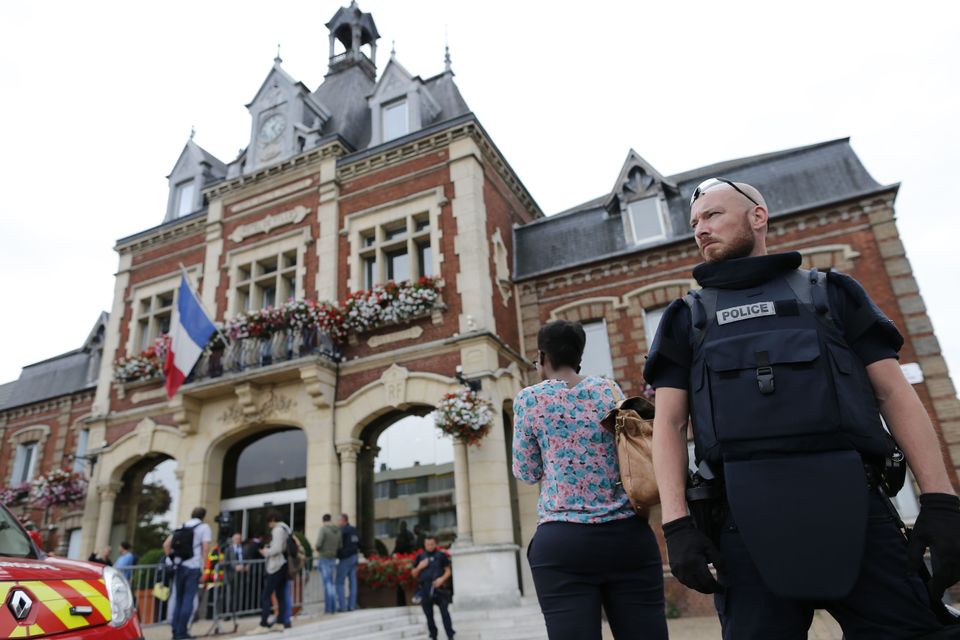