France was thrilled with Obama -- long before he won -- and certainly now that he has. "That a black man of this powerful nation could be president is amazing to us, a message to the world," opined three television lighting crew at the all-night Elections Event at the Trocadero Aquarium. "It's a global symbol that we are entering a new era."

A black man as president is a monumental event -- especially for the French, if one can judge by the striking and almost exclusive importance given to Obama's race by the French press over the last months. Indeed, newspaper debates, conferences and TV shows have been dedicated to the question: "Is Obama really black -- or is he metis?" The alternative journal Rue89 even created a web forum to bring up questions of what "percentage" of black blood constitutes a black, with a French-American reader delicately informing the French of the former l/8th black slavery clause.

"A black president would never happen here," admitted Joe Farmer, the exuberant RFI radio director at the Gala event. "France is not ready. Maybe a woman. But our race issues are firmly entrenched." Indeed, as he noted, few people of color make it in the high ranks of French power -- whether in business or politics (Rama Yade, Minister of Human Rights, a rare exception) -- a fact hidden by the policy of the French not to take census polls with race as criteria. Despite lack of data, however, most would agree that post-colonial France still bears the weight of racism and has a long way to go towards integration.

"It's why we are so excited!" said two lovebird twenty-year olds, Assas law students who stayed up all night, glued to one of the dozens of enormous CNN screens set-up at the gala, excited for this symbol of possibility. "We like the idea that someone can rise to the top with his own merit. Who is black! We think -- maybe maybe that can happen here one day too."

"Well not for at least twenty years," added a French finance debt trader, poised before a display of American flags. "Which is why it is so important to us that the US leads the way. This is great news for us."

The French are upfront about the fact that Obama is celebrated for his symbolism: as a black man, as the new Kennedy, as the man who will open European-American relations. "He spoke in Berlin!" said a young girl, standing before an aquarium of swimming white bream fish. "It shows he is paying attention to Europe."

"His father is Kenyan, so he will care about Africa."

"Besides, he is intelligent. Very intelligent," added a retired statesman standing with his Argentine wife, one of the few who spoke about Obama's policy. "His views on health care, the economy. We see him as extremely well-spoken. We trust him."

The most significant undertone: the French are excited about being excited about America. "We really love your country," was the comment most frequently heard, as the champagne uncorked, blue balloons bounced, and St. Jacques scallops were speared with little toothpicks. "It has been such a disappointment, the way America's image has gone down in the Bush years. Obama is a chance for us to believe in America -- and believe even in the world again."

"It really is a chance for a new turn," journalist-cum-waitress Celine said, bubbling with good cheer.

"Now French-US relations will improve," was the opinion of many.

Noted physicist Harry Bernas gave his opinion why: "He seems more European to us. He recognizes that power, economics, social relations and ideas are all debatable in a world that doesn't conform to the simple-minded John-Wayne-cartoon propagated by US politics since WWII."

"He is open to dialogue with us," was another view.

Entrepreneur Swiss transplant Ivo Flammer also gave his thumbs-up:: "I would give the US people the Nobel Peace Prize!"

By five in the morning, the crowds were cheering -- screaming "Obama, Obama!" --
exhilarated as Obama won Virginia (time-delayed here to the wee hours) and then California seemed close.

Even the director of the event, smoking a cigarette on the red carpet, could not help but show rather partial delight: "He is the change we all need."

Republican sympathizers -- also invited to this event -- were inaudible. If the elections had been held in France, polls have shown that Obama would have received 85 percent of the vote. {Although a recent poll by Le Figaro has also shown that 37% of French would not be willing to vote for a black president in France.}

I asked one Liberation journalist, in leaving -- the night rainy and dark before the sunrise, the Tour Eiffel dim in the distance -- if he would share his reaction to the victory.

He put his hand on his heart. "I am astonished -- and deeply moved -- and feel there is now possibility for real change -- for all of us. It gives us hope." 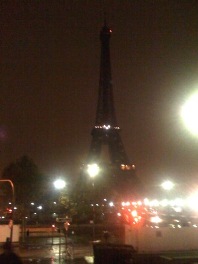