Once upon a time, American women led the world when it came to working. In 1990, nearly three-quarters of women age 25-54 were employed in the U.S., ranking it near the top of the democratic countries in the Organization for Economic Cooperation and Development.

Since then the percentage of women who work in the U.S. has hardly budged, while other countries have significantly upped their game, as you can see in the following chart from the latest Economic Report Of The President, a giant bundle of data and policy pitches compiled annually by the White House.

The percentage of U.S. women working ticked up only one percentage point since 1990. We now rank 17th on the list of 22 OECD countries. (You can see the full list here.)

France meanwhile is killing it, coming in at number one with nearly 84 percent of women working, up from 72 percent in 1990. 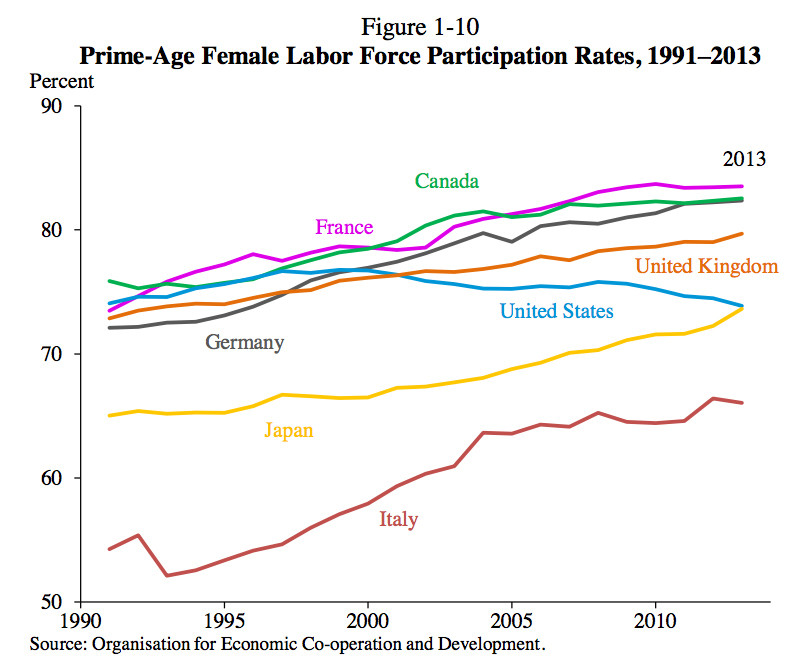 We already know French women have superior attitudes about diet and beauty, but do they also have a better work ethic? Not quite.

The French government has just been much more aggressive about enacting policies that help families and support women who want to have children and keep working. And the policies work. Not only do a huge majority of French women work, France also has the second-highest birth rate in Europe, after Ireland.

Nearly one-third of the gap between the U.S. and the other countries, when it comes to the percentage of women who work, can be traced to the United States’ pitiful work-family policies, says this 2013 study from two researchers at Cornell University. The rest of the gap can be pinned on women aging out of the labor force and the recession, which tossed a lot of workers out of the job market.

France has an enviable bounty of policies that make me and pretty much every mother and father I know want to move there immediately: paid maternity leave, paid pre-school, a generous leave policy that allows parents to take a year off work and receive money from the French government and get their job back.

Here’s what we have in the U.S.: The right to unpaid family leave for 12 weeks.

If you haven’t read Pamela Druckerman’s fantastic account of what it's like to raise your kids in France, Bringing Up Bebe, check it out. She paints an enviable picture of French pre-school where kids eat delicious meals with real silverware. Parents are proud to send them there -- not racked with guilt or nervous for their child’s safety.

Don’t know what I mean? Read Jonathan Cohn’s terrifying piece on American child care, “The Hell of American Day Care.” Cohn serves up data that show only 10 percent of American day care facilities could be ranked as high-quality -- oh, and that day care is expensive, too.

There are some apparent downsides to generous work-leave policies, the Cornell researchers point out. Though a lower percentage of American women work, those that remain in the workforce tend to succeed in greater numbers -- reaching higher up the corporate ladder. Dropping out of the workforce, even with government support, can put women on the notorious "mommy track," where raises and promotions don't come so easy.

Still, not a bad idea to brush up on your French.