France’s prime minister took the debate on the burkini ban to new levels when he invoked one of the country’s national symbols ― the figure of Marianne ― to imply that baring one’s breast is more representative of the French ethos than wearing a veil.

“Marianne has a naked breast because she is feeding the people!” Manuel Valls exclaimed during a speech on Monday. “She isn’t veiled because she’s free. That is the republic!”

The figure came to symbolize liberty after the French monarchy fell in 1848. While different images of Marianne are used on government documents and French euros, one of the most common representations comes from a 1830 painting by Eugène Delacroix, where she’s seen brandishing the French flag with one breast exposed.

Some French historians, like Mathilde Larrère, were quick to point out that Marianne isn’t always bare-chested. She’s also often depicted as more aesthetically conservative ― hair tied up, chest fully covered and sitting instead of standing.

Her exposed breast “doesn’t signify anything at all ... it’s just an artistic tactic,” she tweeted. “Marianne has a naked breast because she’s an allegory, you cretin!”

The debate over women wearing burkinis, which inspired Valls’ comments on the veil, has consumed French politics in recent weeks.

The country’s highest administrative court ruled to suspend the burkini ban last week, after dozens of towns and cities across the country had imposed fines on women who wore the full-body swimsuits in public.

Valls defended the ban, deeming burkinis “not compatible with the values of the French republic” and claiming they represented the “enslavement of women.”

Nicolas Sarkozy, the county’s former president who is once again running for the office, went as far as to promise to change the constitution to ban the burkini if he is re-elected.

Presidential elections in France are set to take place next April. 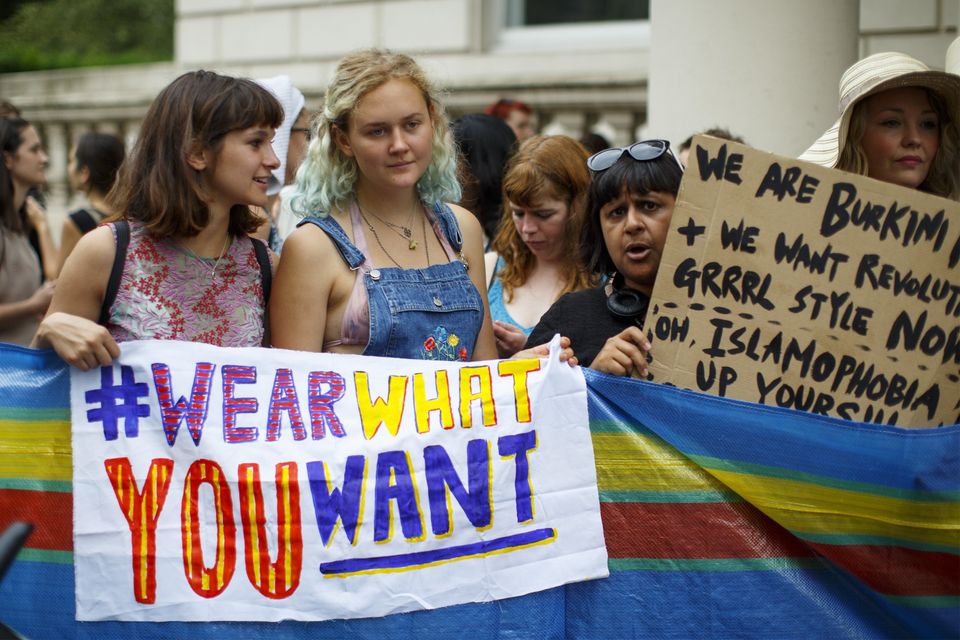 1 / 10
Protesters from different societies stage a demonstration named 'Wear What You Want' themed as a beach party style, outside the French Embassy in London, England, United Kingdom to show support for Muslim women on August 25, 2016 after 15 French towns introduced and started to enforce a ban on the burkini.&nbsp;
Anadolu Agency via Getty Images