I met with Francesca Lia Block at Sage, a vegan restaurant in Culver City, to discuss her new novel Beyond the Pale Motel (St. Martin's). Sitting in the lovely patio eating a vegan falafel bowl with Block across from me wearing a black tank top, black skinny jeans, and shiny pink Nike high-tops, I couldn't help feeling like I'd fallen into a Block novel.

Many of Block's 25 books are set in a gauzy, fairy tale Los Angeles, and her ability to write a love song for the City of Angels has become legendary. From the first paragraph of her 1989 debut novel Weetzie Bat in which the eponymous character hates high school because none of her fellow students understand the marvels of an L.A. where Marilyn's prints could be seen at Grauman's Chinese Theatre and a person could find plastic palm tree wallets at the Farmer's Market, Block began to weave a dreamy Shangri-L.A. where the terrible smog only serves to make the sunsets that much pinker. 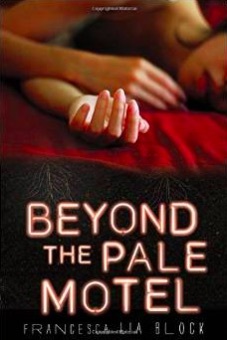 In Beyond the Pale Hotel, Block's signature lush language, devotion to style and aesthetic, and love for L.A. permeate the novel. But the book is also full of page-turning suspense and a dark sexuality, making it much closer to a thriller than anything Block has written before. And in Beyond the Pale Hotel, Los Angeles becomes the noir setting for a woman struggling with both internal pain, and the pain of living in a savage and dangerous world.

Catt, a 36-year old Angeleno who works as a hair stylist with her best friend Bree, narrates Beyond the Pale Hotel. The two have been friends for half their lives, share a devotion to fashion, and a path of recovery from alcoholism. When Catt's husband leaves her at the same time that a Hollywood Serial Killer begins a spree of murdering and dismembering women who look like Bree, Catt's suffering overwhelms her and she starts to unravel. With alcohol off-limits as a form of solace, Catt seeks comfort in a series of men -- some of whom she meets online at a site she and Bree call "FU Cupid." The novel explores the inner life of a woman in distress whose forms of self-soothing are sharp-edged and combine the stereotypically "male" behavior of seeking comforts of the flesh, as well as the more "feminine" striving for an unattainable beauty ideal that is literally hurtful to pursue.

In a Hollywood where a serial killer roams the streets, Catt seeks protection in the form of a parade of men who pass through her life -- and her bed -- in the wake of her husband's abandonment. This manner of seeking comfort and safety from men has its origins in a conversation Catt had as a teenager with her father when they were watching a news report about Jeffrey Dahmer. Catt told her father she was scared someone would break in when she wasn't home and her father replied, "That's why boyfriends are a good idea." Ironically, it's intimacy with strange men that puts Catt at added risk of being a victim of crime. And it's part of what makes the novel a brilliant modern femme noir that could hold its own against the work of Bret Easton Ellis or even Raymond Chandler.

But Catt participates in an even deeper and more insidious form of self-destructive behavior. Catt's sexuality is intricately intertwined with her self-consciousness, with her longing to be both attractive to men, and to find herself beautiful. And so Catt's pursuit of beauty becomes a clear form of self-abuse. A Brazilian bikini wax must be followed by a regimen of antibiotic and aloe vera creams to soothe the pain. Botox injections to fill fine lines leave her face ugly with bruises she covers with pancake makeup. And Bree wears high heels that make her feel sexy even as they hurt her feet.

This theme of a woman's misguided drive to be beautiful, stylish, and flawless in the hope it will allow her to love and accept herself remains one of the most haunting and important themes of the novel, and certainly one that resonates in a country where the number of cosmetic procedures and surgeries are rising steadily and up to 75 percent of women have "some unhealthy thoughts, feelings or behaviors related to food or their bodies."

When I asked Block about these two themes in the novel -- that of Catt turning to men for protection in a world where men are often dangerous, and the way that Catt's efforts to be beautiful become a form of self-abuse, Block said,

"In my life it's been more about turning to a man for protection from the internal abuse rather than being afraid of the external man." She said that the fantasy is that if a woman finds a man who accepts her, she can let the internal abuse go. "I think that is what I was playing out [in the novel], but actually the reality is that until you find it in yourself it's never going to go away. It's never going to feel better. You have to feel it in yourself." Self-love and acceptance is indeed a difficult inside job, and one that throughout the novel Catt seems unlikely to achieve. 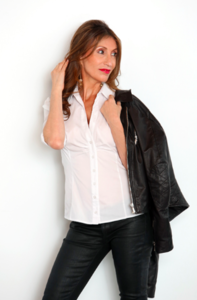 Block says she keeps a close connection with her devoted fan base, primarily through social media. And she's found that that Beyond the Pale Hotel has a larger male readership than many of her previous novels. She attributes this to both the rich sexuality of the novel, and the plot-driven suspense that's new to her work. Block also mentioned that reading the book Wired for Story by Lisa Cron helped her to make a shift to more tension in her plotting.

"Primitive man needed stories as a template for how to survive in a dangerous world. And that is what we are doing when we are writing: we are creating our own template for ourselves as a writer and then as a reader. Because we can imagine vicariously what it would be like to be attacked by a wild animal, and what would you do. There's an endorphin, a rush that comes from just the reading of it, as well as the writing of it."

Beyond the Pale Hotel provides both a ferocious rush and unprecedented insights into the sexuality and suffering of a woman dealing with the brutality inflicted on women by men, as well as the brutality she inflicts on herself in her pursuit of a physical loveliness that will (she believes) allow her to love herself.

The novel will grab readers by the throat, even as it seduces them with the swirl of drugs, illicit sex, silk dresses blooming with roses, and a desert city populated with palm trees, hot night breezes, and a serial killer. Beyond the Pale Hotel is brilliant, merciless, gorgeous, and a stunning departure from a writer whose oeuvre has already left a lasting and important impact.