Christo and Jeanne-Claude's ribbony river of saffron-colored Floating Piers, fashioned from 220,000 high-density polyethylene cubes floating on the water, has allowed Italy's Lago d'Iseo to bask in a delicious afterglow without the crowds.

The fourth largest lake in Lombardy fed by the Oglio river, Lago d'Iseo is Italy's romantic gesture, a calmer, castle-dotted version of the less high-profile Lake Como which is around 65 miles away.

The Floating Piers saw over one million visitors, and over 50,000 glasses of sparkling wine were sold during the Franciacorta summer festival and the wine bar in Sulzano. Over the past year, the region has been on a marketing spree, eager to spread the sparkling wine gospel to the thirsty, well beyond the boundaries of the Brescia region. 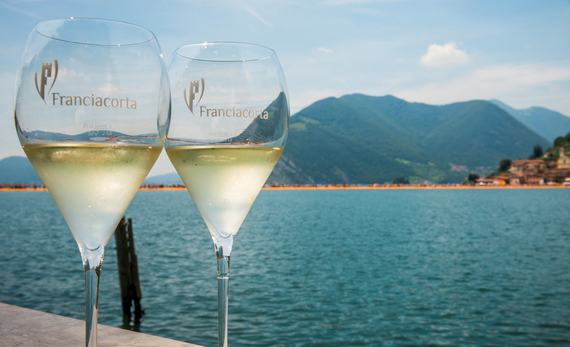 After the aftermath of Christo's floating masterpiece, there has been a soft surge in the demand of the sparkling grape varietals produced by the over 100 vineyards in the Franciacorta region, which lies on the lake's southern shores. Under the careful supervisory eyes of the Consortium now headed by Mr. Vittorio Moretti, who took over the position held by larger-than-life Mr. Maurizio Zanella, each vineyard carefully follows strict standards on growing, harvesting, and production methods.

With the growing Prosecco shortage, this is Franciacorta's golden hour. The region known for its sparkling wine comes in several beautiful varieties from the classic brut to the trademarked Satèn, which is a silky smooth version that is a tribute to the Milanese fashion industry.

Satèn is as unique as Milan's prêt-à-porter fashion sensibility, with a palate that reveals pleasing savoriness and freshness fusing with the delicious soft texture, reminiscent of silk on skin. It is prescribed to the use of Chardonnay, and each vineyard produces it according to its own vision.

The name "Franciacorta" comes with legacy: it comes from Benedictine and Cistercian monks who arrived from Cluny, France and began to govern the area in as early as 1100. The fertile, giving soil, perfect for growing the three types of grapes the region is known for (Chardonnay, Pinot Noir or Pinot Nero in Italian, and Pinot Blanc). While the locals know it as well as they know the lake, the word on the U.S. street is just getting out.

The short, "Franciacorta: a land, a people, a wine" came out early in 2015, followed by a hauntingly beautiful film, "F for Franciacorta -- Una terra, un vino-il film" late last year, which shows the cinematic beauty of the landscape, and the seasonal persistence of the vintners. It is poetic armchair travel, an introduction and a visually-detailed look into what makes each bottle so special.

There have also been some glamorous and constructive partnerships that have given much needed exposure to these wines: Bellavista supplies the wine to Teatro alla Scala each year, and the notable Italian leather goods store Fratelli Rosetti created a limited edition of Hobo Sparkling shoes for Expo Milano 2015, inspired by the effervescence of sparkling wines. In November last year, Fratelli Berlucchi offered sparkling wine for the Women's World Polo Championship held in Houston, Texas. 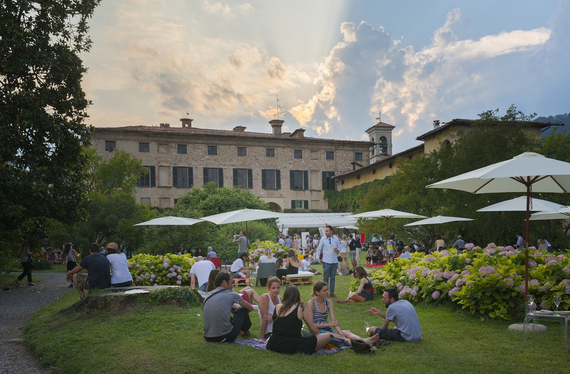 Quality is hardly an issue: all bottles bear the DOCG (Denominazione di Origine Controllata e Garantita) sign, showing that the vintners followed the strictest standards of production. But this is changing, on the heels of creative efforts by the Consortium and the vineyards.

A sales manager at Eataly Vino, Mario Battali's outpost in New York says that they sell bottles of Franciacorta all the time, and that "it's starting to become a lot more popular; people want the quality of Champagne without the prices." The brut continues to outperform the other types of finishes.

Restaurants have started pouring the wine by the glass too: in New York you can taste it at Masa, Del Posto, Le Cirque, Lupa and Felice Wine Bar among others. Sommeliers rave about its quality.

Italy has a roster of other sparkling wines including Prosecco, Asti, Spumante, and Lambrusco, and the reason why Prosecco became so popular is because of its approachable style, with softer, fruit flavors and notes. And while Prosecco's fermentation process is done in steel tanks, Franciacorta's hand-harvested grapes are fermented first in wooden casks, then in the bottle for a minimum of 18 months.

A 2008 Gran Cuvée Brut Rosé from Bellavista, for example, is an effervescent homage with creamy tones and a red floral carpet, best served chilled.

It is wine perfect for the soul of summer, and only one example of why this carefully-cultivated region's moment has truly arrived.