Before the agreement between Greece and its creditors was even official, European centrists' leader Guy Verhofstadt paid tribute to French President François Hollande for his role in the talks. “France played an important, constructive and positive role in these negotiations,” Verhofstadt said Monday on France Inter, just minutes before the European Council’s president announced that the 19 eurozone nations had unanimously agreed to the conditions for Greek aid.

That agreement came after a weekend of tension for Europe and 17 hours of negotiation that began Sunday afternoon, in which Hollande and German Chancellor Angela Merkel made the deal with Greek Prime Minister Alexis Tsipras that should keep Greece in the eurozone.

“We had to keep this French-German relationship, this relationship between Madam Merkel and myself, which is necessary if we want to reach a compromise,” the French president said Monday.

Since the Greek referendum on July 5, the French government had repeatedly declared that Hollande and Merkel needed to work side by side. “There can be no solution if between Angela Merkel and François Hollande there isn’t ... a truly serious conversation,” said Michel Sapin, the French minister of finance. And so the German chancellor was invited to Paris last week.

Yet during the eight days that followed, the declarations from the two sides began to reveal a more serious gap in their conceptions of negotiation and their ultimate wishes. Faced with Merkel’s adamancy, France sought to keep the dialogue going and to bridge the gap between Tsipras and Greece's creditors. “He succeeded in convincing the chancellor to resist her coalition, most notably her finance minister who wanted Greece to leave the euro,” suggested one French Socialist official.

Merkel had always taken a hard line toward Athens, making it clear that she would approve of a Grexit if the Tsipras government didn’t accept reforms similar to those proposed before the referendum. She played the “bad cop.” 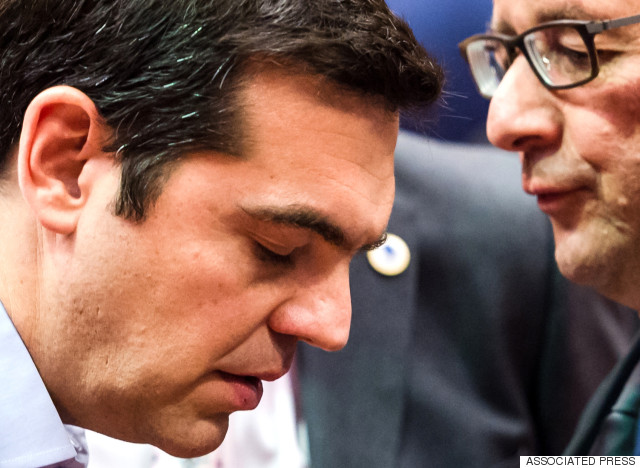 While Hollande didn't go so far as to endorse the idea that France would veto a Grexit -- a suggestion made by some on the French left -- he has played the role of “good cop,” listening to the Greeks even when the idea of a referendum displeased French officials. French commitment was illustrated by small symbolic gestures, such as the assistance that the French Ministry of Finance provided Greece in finalizing the draft proposals to send to its creditors late last week. “I think that if we had a different president, Europe would already have drafted the Grexit, and we’d be preparing for [Greece’s] departure,” said Corinne Narassiguin, spokeswoman for the French Socialist Party.

Officially, even if the French Ministry of Finance started working on the scenario, France never seriously considered a Grexit. Hollande had carefully spoken only of “another solution.” “Everything must be done to reach an agreement,” was the president’s favorite remark during negotiations. He gave the impression he wanted to reach compromise at any price.

At the same time, France responded to the resounding "no" vote of the referendum by calling on Greece to draft new proposals. “I am prepared to help you, but you must allow me to help you,” Hollande told Tsipras. He implied that the ball was back in Greece’s court. Greece submitted those proposals late last week, which were then rejected by the Eurogroup of finance ministers, which ultimately led to the final hours of negotiations with Merkel.

His opponents claimed that Hollande’s double-talk could have ruined the negotiations at any moment. “François Hollande’s attitude since the beginning of the crisis contributes to weakening the negotiators’ positions. The Head of State constantly sends contradictory messages: He wants to give the impression he’s on Merkel’s side while also implying to Mr. Tsipras that he understands his tactics. Through trickery, Mr. Hollande is compromising the negotiations,” wrote former prime minister François Fillon in Le Figaro.

As for Hollande's predecessor, Nicolas Sarkozy gave the impression of an about-face by moving toward the views of the so-called “executive couple” last week, but he didn’t forget to insult Hollande. Attending a Popular European Party meeting in Brussels, the current head of the French opposition on the right called out his successor. “Mr. Hollande must control himself and reestablish a unity with the German chancellor. It was a mistake, as Mr. Hollande did for seven months, to let Mr. Tsipras think he could have a check without conditions from his partners in the eurozone, without undertaking the reforms that we need,” Sarkozy stated on Sunday.

It was of little surprise, then, to see the right toe the same line after the agreement. “The compromise reached owes nothing to François Hollande, who created weakness during negotiations,” French National Assembly member Eric Ciotti said.

However, it was not to please his opposition that Hollande apparently sought at all costs to keep Greece on the euro. If he did so, it was for four reasons. The first was geopolitical order. Jacques Delors, Hollande’s mentor and former president of the European Commission, has highlighted the risks of instability following a Grexit.

Economically too, France feared any contagious consequences of a Greek departure. “Our fear is based on the second-round effect, explained Sapin to Mediapart. "The pressure on peripheral countries can cause slower growth in these countries, and subsequently in all eurozone nations.” At the precise moment when the France economy is edging into recovery, there’s no question for Hollande -- or for Merkel -- of killing the only hope for a rebound.

Government officials also spoke repeatedly about France's historic role in Europe. Hollande implied that he never wanted to risk an explosion of the eurozone or the eviction of one of its members. “France has always tried to advance Europe, and I will not be inconsistent with this history, I would almost say, this dignity of the nation. France always looks for agreement, compromise. She has always done so. That is her place in Europe; that is her place in history,” he said.

Finally, there were more domestic political considerations. It’s not that Hollande will suddenly gain popularity because of the Greek deal, as the French have always been less enthusiastic about what occurs on the international scene. But his rather accommodating position with Greece will allow him to regain a (small) amount of trust among those on the left who thought he never kept his promises when it came to European issues.

By not following Germany’s line on the Greek issue, Hollande hoped to show that he is not for austerity at all costs -- a gesture that might please the rebels of his own party, who regularly throw around threats to dissolve the government. Any such reconciliation will be seen as soon as Wednesday, during the National Assembly is set to vote on the agreement with Greece. The congratulatory remarks from Jean-Luc Mélenchon, co-founder of the Left Party, last week and by some Green Party members on Monday confirm that Hollande has regained some respect from the left.

This article originally appeared on HuffPost France and was translated into English.