An 8-year-old Cub Scout has penned a poignant letter asking the Boy Scouts of America to allow gay participants.

The boy, identified in the letter only as Frank, writes, "Pleese suport gay pepel more let them in scouts. It's not like thir evil."

Check out the full letter below, then scroll down to keep reading: 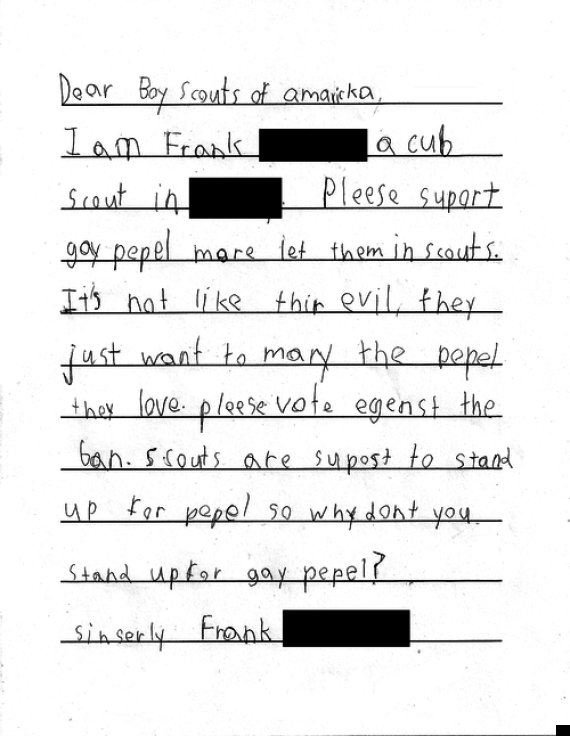 Frank's parents, who submitted the letter to The Huffington Post and have asked to remain anonymous, told HuffPost Gay Voices that they enrolled their son in Cub Scouts "stupidly thinking Boy Scouts of America had gotten rid of its anti-gay policy, as Girl Scouts had."

Though they withdrew Frank from the Cub Scout pack after news of the BSA's gay scout ban began making headlines in recent months, they rejoined "after realizing that homophobes in other parts of the country want fair-minded people out of a very worthy program."

In an email, they added, "We told our son we could rejoin only if we consistently and insistently seek change. He has attended two gay rights protests as a young child and now knows the issue, but these are his own words."

They also ask readers who like Frank's letter to consider signing the Scouts for Equality petition.

On Feb. 6, the Boy Scouts of America cited "the complexity of the issue" in opting to hold off on deciding whether to ease its much-criticized policy of excluding gay scouts and participants until May, the Associated Press reported.