Frank Ferrante was a 54-year-old Italian-American from working-class Brooklyn struggling with multiple health issues when he stumbled into a vegan restaurant in San Francisco called Café Gratitude. At the time, he thought "vegan" was a planet. For decades Ferrante had been battling drug and alcohol addiction and Hepatitis C; and taking a slew of medications. He also had chronic fatigue, joint pain, depression, no sex drive -- and weighed close to 300 pounds. He was essentially a big guy with big problems and a big heart.

Café Gratitude was run by a group of radiant 20-something vegan hipsters who immediately befriended Ferrante. One day, one of them named Ryland asked Ferrante what he wanted to do before he died. He replied: "I want to fall in love one more time and I don't think anyone will love me with this body, because I don't love myself." This lit a fire under Ryland. "Frank, wanna do something about it?" he asked. "An experiment? Wanna let us become your transformational cheerleaders?"

Ferrante was game. He figured he'd eat some rabbit food, lose some weight and get healthy. The boys decided to film the process, despite their lack of filmmaking experience. The result is the irresistible "May I Be Frank," a documentary that explores Ferrante's remarkable reinvention and his alliance with three extraordinary young guys. Part of the film's appeal lies precisely in this commingling of generations: a seemingly unlikely pairing of opposites that was, in fact, a match made in heaven, because if it hadn't been for those young men, Ferrante might be dead.

Ferrante's transformation began simply enough. On day one, the boys from Café Gratitude went to his house, raided his fridge and threw out just about everything in there: butter, pasta, cheese, meat -- even the microwave, which kind of pissed Ferrante off. Then his vegan regime began.

Every morning Ferrante had to drink a shot of wheat grass. "Looks like it should be mowed," he said the first time he was offered a glass. "It was just mowed," the boys replied. Ferrante downed it like a shot of vodka, then grimaced. It wasn't easy for a meat-and-potatoes guy to go vegan, Café Gratitude style. Neither was saying the daily affirmations that were part of the process. Every day, with guidance from his new life coaches, Ferrante took a deep breath, looked in the mirror and repeated: "I, Frank, do love me, my body's vigor and harmony. I am perfect health. Radiant beauty. And divine energy..." The affirmation went on. At one point he almost snorted at the mirror.

But Ferrante persevered. He went to a holistic health practitioner for body work, attended a transformational retreat, did yoga. He started to lose weight but didn't lose his sense of humor. The first time he got a colonic cleanse he looked up at the cute young woman doing the procedure and said: "The nerve-racking part of this isn't necessarily the mechanics of it. It's actually showing you my ass."

The boys were always by his side and Ferrante was in awe of them. "My heart and soul trusts these guys," he said, "but my body's saying 'get the f*ck back to New York." The boys took it in stride. They called to find out about his first post-colonic bowel movement. They made sure he was eating green and helped him through a spiritual log book. They checked in on regular basis to see if his spirits were up or down.

Often those spirits were down. Because the more Ferrante detoxed and shed weight, the more emotional pain he felt. There was remorse about his brother and growing up in a family with a notable absence of joy. There was intense despair over his estranged relationship with his daughter and ex-wife. Ferrante got in touch with a yearning for intimacy and emotional closure that staggered him. But every breakdown had a twin breakthrough. "I don't think that the pain you cause other people can be separated from the pain you incur yourself," he said at one particularly difficult moment. "It never occurred to me until just now." He openly sobbed and added, "This sucks." "No," said Ryland, shepherding him through the grief. "It's beautiful."

One day a woman crossed paths with Frank and spontaneously offered this advice: "Love like you've never been hurt." It stopped him dead in his tracks.

Twenty days into the "experiment," Frank had lost 23 pounds. By day 35, he'd lost another 19. The weight kept coming off. The traces of hepatitis C disappeared. He gave away his clothes, made space for new things in his life. Eventually, he reconnected with his family on higher ground and did fall in love, but not before realizing that the person he had to fall in love with first was himself.

Ferrante has become something of an accidental rock star since the first screening of "May I Be Frank." People young and old alike are compelled by the film, cry, thank him for the inspiration. After one packed screening in Los Angeles, an Australian woman stood up and enthused, "there's some serious global vibrational support for you out there, man."

Frank makes a point to emphasize that his second act is not just about food or wheat grass -- it's not just one thing. It's a process; he still has ups and downs. He is, however, clearly a changed man. And he's learned more about the power of love, redemption and transformation than he had ever bargained for. When I asked him how he feels about his reinvention and the pressure that comes with it, he said, "you know the term 'cognitive dissonance'?" Then he shook his head and added, "You call my story 'reinvention?' Try resurrection."

How Frank Ferrante, Star Of 'May I Be Frank,' Transformed His Life
Midlife Reinvention 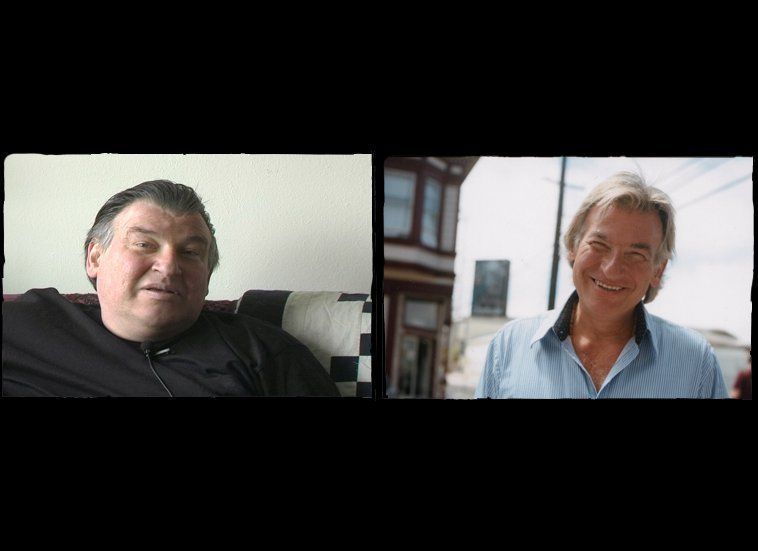 1 / 17
Frank: Before And After
Be Love Productions