Curvilinear tables by Zaha Hadid. A violent (and humbly-named) chandelier by Daniel Libeskind. A modernist lamp by Richard Neutra. Architects frequently transfer the language of their buildings and their skills at the drafting table into the world of industrial design, but one of the most prolific may be American Postmodernist Michael Graves, a member of the New York Five whose hundreds of tea kettles, dog houses, spatulas, and the like have graced the high-end shelves of Alessi, along with the more accessible ones at Target. In light of the 2012 Driehaus Prize winner's current, very cleverly titled retrospective of his product designs (currently on view at Anne Reid '72 Art Gallery), and the end of his 13-year-long collaboration with the big box department store, Graves talked to ARTINFO about the differences between designing buildings and tea kettles, his Etruscan influences, and why the New York skyline doesn't do anything for him. 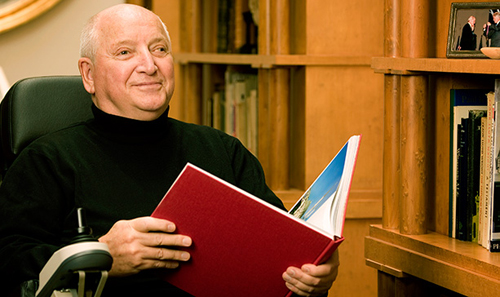 There's a lot of crossover between architecture and design, at least, from architect to designer. When it comes to designing a tea kettle rather than a building, how does your approach differ?

It's really the same. It's not different. When I design a building, I'm making sure you and I can get to the front door, there's enough of a threshold for entry, and that the rooms are in a logical sequence. The same kind of thing that happens in product design. When we did the Alessi tea kettle, Alessi said he wanted two things: for the kettle to boil faster than any other kettle on the market, which was easy to figure out because that's just physics and the shape of the kettle over the flame, and then he said something ineffable -- "I want an American kettle." I said I don't know what that is. Anyway, because it has a little bird that chirps, for him it was something with wit, and there were no changes. It's finding those things in buildings, finding those elements in product design that we're always after. Good design to me is both appearance and functionality together. It's the experience that makes it good design.

Did that little bird make it American for them?

It did for them, but if it worked for any of us, I'm not sure. But it was at least witty. I grew up in Indiana and spent summers on the farm. I would wake up with the water boiling away and the rooster crowing, and that meant morning to me.

It's funny actually how many postmodern kettle designs there are. When Philippe Starck did the Hot Bertaa kettle for Alessi, it turned out to be a real flop. Have you found that some of your designs were better received than others?

Philippe Starck and I go at it very, very differently. He's always trying for that edginess. He would rather the kettle not work sometimes, I think, and just be collected by kettle collectors or object collectors. Frank Gehry made a kettle that didn't work either. It was very expensive and they didn't sell any of them. It looked interesting, but we always start by saying it's going to work. That's never a question. Maybe some work better than others. Someone once told told me they didn't like taking the lid off the kettle because they'd just lose it in the kitchen, so we made a kettle with an attached lid that you slide. It was in response to that that we made one that did something different. A woman in a wheel chair told me that both she and her husband just needed a coffee maker that's top filling because of their situation. Those kinds of things are kind of touching, so you go after them. You find a way. We were working on making these objects easier for people with disabilities.

Has being in a wheelchair influenced you in that direction?

We've taken on health care in a big way in our office, ever since nine years ago when I was paralyzed. I was in eight different hospitals, three different rehab centers, and all the rooms were dreadful. As an architect, designer, and patient, I can do something to help.

You frequently cite Rome as a source of inspiration for your color palettes, and they're quite visible in your first design. What is it about the city that provides you with so much inspiration?

I lived there for two years. The idea is that Rome is this city that starts with life before Christ. Everything from the Etruscans a thousand years before Christ, up through the ancient monuments and things like the Pantheon, to the Romanesque, and finally to the Rennaissance and the Baroque. Even the modern there is interesting. They're just terrific in the way the Romans had no problem tearing something down and building something new because they have a faith that the new will be as good as the old. We don't have that faith here. We want to keep the old because we don't have very much of it. And oftentimes we've been disappointed with what we've replaced it with.

Speaking of the new, we've had a lot of additions to the New York City skyline in recent years. Do you have a favorite new building?

Not a single one?

Not a single one. I'm a kind of an anti-modernist in that I don't like glass boxes, and I don't like inhuman buildings, and those are the ones being built now. There isn't much for me to look at in New York skyline, or any other skyline.

Is there a point in history where you just lose interest?

Your 13-year design collaboration with Target comes to an end this year. Are you looking elsewhere for collaborators now?

I'm going to miss the sort of glory days when we first started with Target. We were working in various areas of the store and that was truly, truly gratifying. Then things started to change. They started to add groceries. Target can't do everything, so they decided on groceries rather than continue with people like me. So we're looking to fill the void that's left by Target. We're looking for somebody now, and it looks like we have a great opportunity to work with another retailer. That's not in the contract stage yet, so I can't say anything about it. Target changed over the years, and it's quite understandable what they're doing. When we started we were the only outside designer, and then they started to add people in fashion. Target started to design things in-house, and they went from zero to now 500 designers that are working for Target in their own building. They don't need outside designers like me.

I can't wait to see who your next collaborator will be.

It's not hard to figure out.

You're a celebrated architect, a well-known designer, and, as it turns out, a little-known painter. Did you not have enough creative outlets as it was?

I've always painted. I've always been influenced by painters like Le Corbusier who are architects who painted murals in their buildings. I started that way in my first buildings in the '60s, painting whole walls for people and just giving them away because I wanted them there. I didn't ever work for collectors and people with lots of dough. I did do what I could do in that regard, and then people started to ask for them. That was even better, to get paid for it. When I was paralyzed my activities changed. I used to play basketball and golf, and now I can't do that anymore in a wheelchair. I've spent all that time painting now, and I'm enjoying it thoroughly. Its just the most marvelous thing.

Which artists have had the greatest influence on you?

We all love Picasso. I look at Morandi, Pontormo, Caravaggio. Really, the Renaissance painters are favorites of mine, so that list goes on and on. There's also Matisse, as a modern painter. I just did a lecture at the Boston Museum of Fine Arts and showed the paitnings at the end. People had no idea that I was doing that and loved them, so I'm really pleased with the way they're being accepted. I need a gallery.

Akrotiri, The Mythical "Minoan Pompeii," Reopens to the Public After Arduous Seven-Year Shutdown