Frank Gehry is the acclaimed architect of the Guggenheim Museum in Bilbao, Spain and the Walt Disney Concert Hall in Los Angeles -- which just celebrated its 10th anniversary. This interview for The WorldPost is adapted from a conversation with The WorldPost editor Nathan Gardels from the current NPQ.

"When I look outside the door what do I see? An airplane flying over, a car passing by. Everything is moving. That is our environment. Architecture should deal with that."

WORLDPOST: You once commented on your fascination with a dancing Shiva sculpture that belonged to the Norton Simon Museum. And you seem to have tried to capture this "frozen motion," as you put it, in your buildings in Bilbao and at the Disney Hall in Los Angeles.

Interestingly, your attempts to capture this "frozen motion" in architecture correspond to the scientific pursuits of Ilya Prigogine, the chaos theory physicist who won the Nobel Prize in 1977.

"If the clock was the symbol of classical science," Prigogine has said, "sculpture is more the symbol for today. Sculpture is time put into matter. In some of the most beautiful manifestations of sculpture, be it the dancing Shiva or in the miniature temples of Guerrero, there appears very clearly the search for a junction between stillness and motion, time arrested and time passing. It is this confrontation -- a hidden unity just like dark and light -- that will give our era its uniqueness." A sculpture like the dancing Shiva is the symbol of the new work being done in physics because it "embodies some elements that conform to given rules and other elements that arise unexpectedly through the process of creation."

Though your buildings look as if you've throw together disconnected fragments, isn't there really a synthesis, a hidden unity as Prigogine suggests, in your designs?

GEHRY: You are absolutely right. I am amazed to hear this quote from Prigogine. That too is what I am seeking, though guided by intuition and not so consciously by intellect. It is all about a sense of movement. When I look outside the door what do I see? An airplane flying over, a car passing by. Everything is moving. That is our environment. Architecture should deal with that.

For example, the best way to look at the building I did in Bad Oeynhausen, Germany is to go across the road to the bar and just sit there and look out. Big trucks are whooshing by. When they come along the road, they fit into the form of building. The movement of the trucks doesn't conflict with the motionless building, but integrates with it.

I didn't do this on purpose, but intuitively. Such a building strikes me as very much like the dancing Shiva. I used to sit there and just look at Norton Simon's dancing Shiva. It was a remarkable sculpture. I swear it was moving. How did they do that?

I had a similar feeling when I saw the Elgin Marbles. The shield of the warriors seemed to be thrusting out. You could just feel the movement. These observations affected my work very much. When I would go out to the suburbs and see these huge tracts of housing under development, I was fascinated. You would see row after row of wood frames going up with piles of wood stacked all around. It was really vibrant. It looked far better than when the houses were actually finished.

I used to fantasize: What would it look like if you just threw all those piles of wood into the air and just froze them there in mid-air? It would be magnificent. Indeed, the great organ in the new Disney Hall has some of that sense to it.

WORLDPOST: In Los Angeles there is neither utopia nor ruins -- the downtown has been completely eradicated four times in the last 100 years. Creating architecture here is like building in a "pure space." This corresponds to something the poet Octavio Paz said -- that we live in the permanently temporary present of "pure time" without a past, since all utopias have failed, and with an undetermined future.

One might even say that your Disney Concert Hall is more a perfect symbol of Los Angeles than its sponsors imagined. Pure time meets pure space in the frozen motion of those metallic waves. That is our reality today.

GEHRY: I suspect there is some truth here, that I have tapped into something that is going on, that my buildings represent a certain way of seeing. At a personal level, though, it is hard to claim such things.

I'm not a theorist, but a vacuum cleaner. I listen. I look. And then I represent with my tools. As for the pure space of the present, there are a lot of constraints. Why do our leaders, and the public at large, want to live so much in the past? It seems the less faith they have in the future, the more they want to anchor their identity in the past. But the past is gone. It is a fiction of our insecurity. To anchor architecture in the past is to build nostalgic parks. It is to make ersatz out of heritage. And it is denial.

WORLDPOST: Arata Isozaki, the Japanese architect who built Los Angele's Museum of Contemporary Art, says he likes to build in America because there is no irony. Relative to old societies like Japan, there is no ancestral territory, and thus little if any distance between the context and whatever new it is you want to create. There is no conflict with history in America which, as (the French philosopher) Jean Baudrillard has put it, is essentially "space plus a spirit of fiction" -- in other words, pure space.

Isozaki contrasted this with his concert hall in Kyoto, where the traditionalists fought against his design as unfitting for Japan's ancient spiritual center. Isozaki argued back that Kyoto was little more than a theme park where tourist buses unload groups of Japanese looking into a past that has no reality for them today.

"They might as well be wearing Mickey Mouse ears," Isozaki told the enraged traditionalists." With the arrival of pure space, the authentic becomes inauthentic and vice versa.

GEHRY: As far as it goes, I have to agree. At the same time, though, there is, of course, something that is different. Kyoto grew out of a refined culture over the centuries. It evolved a method of building and an aesthetic that meant something. It was fashioned in a crucible of time, feeling and culture that was related to a spiritual connection with nature. When I took my kids there, it became an important part of their experience.

Asia and the Generic City

WORLDPOST: Rem Koolhaas, the Dutch architect, has declared that the city as we have known it is gone. We have arrived in the age of "the generic city," liberated from "the captivity of the center" -- and the personality, identity and constraints associated with that. Connected in cyberspace, we will all live in the floating, unanchored periphery. Should we leave our vague regrets behind and just embrace this open future?

GEHRY: That is freedom. I suppose it is the pure space you've been talking about. And Rem is probably right that this form will cover most of the planet.

WORLDPOST What is your favorite city?

"I see in Tokyo today what I see in my favorite writer, Salman Rushdie. He’s like James Joyce, his novels are episodic and open-ended -- they go all over the place, in seven directions at once. The characters have layers of identity -- plural identities ."

GEHRY: Tokyo is my favorite city visually. It is partly the density that I like, but also the transitional quality. They have the history, but they didn't stop because of it. On one street you will find a temple next to an eight-story building from the 1950s next to a 30-story building constructed in the 1970s. Then they plastered neon signs all over and stuck a roadway in the middle of it all going off into space. It is dynamic, like those erector sets we used to play with as kids. Along the freeways and down at the Tokyo Bay, they build these Godzilla-size convention centers. But they are tasteful, more invested with architecture than you might find in America. They are clearly plugged in to a style sense.

Then they will build those wacko indoor ski resorts that look like the Eiffel Tower. It is weird, but beautiful. I see in Tokyo today what I see in my favorite writer, Salman Rushdie. He’s like James Joyce, his novels are episodic and open-ended -- they go all over the place, in seven directions at once. The characters have layers of identity -- plural identities.

Now, when they go the next step -- as they already are in the Shinjuku area of Tokyo -- there are only 50-story buildings and it looks like 6th Avenue in New York. Then they lose it. When they get that big, they need more land. And that is when they overpower everything else. 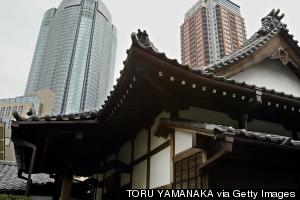 WORLDPOST: What is your image of the future city? For Koolhaas, the old cities of Asia will give way to the Generic City as they are obliterated with megastructures to accommodate the demographic deluge. That will happen either in an ordered way, as in Singapore, or in a more dystopian way, as in Blade Runner. Simply, as Koolhaas puts it, “the past is too small to inhabit.”

GEHRY: I don’t know if we’re capable of speculating about the future. We know bits and pieces, but we can’t know what the aggregate is going to look like. I don’t have any hopes that it will be much to be excited about, though. Today, there are pockets of sanity that are of a scale where they are still visible in the chaos. In the future, the pockets of sanity will become tiny. Perhaps then the buildings I’m doing that look like they are moving will ultimately dematerialize into ether. The mega-scale will overpower all else. In rapidly growing Asia, they are interested in building, not architecture. I’ve been invited to China, but I’ve turned them down because I know the people building on large scale there are Donald Trumps. Chinese Donald Trumps. As a friend of mine says, it is already over in China for architecture.

*This interview for The WorldPost is adapted from the current issue of NPQ.

Frank Gehry: What Is The Connection Between The Dancing Shiva And The Disney Hall?
Japanese Robot Teaches Kids Calligraphy 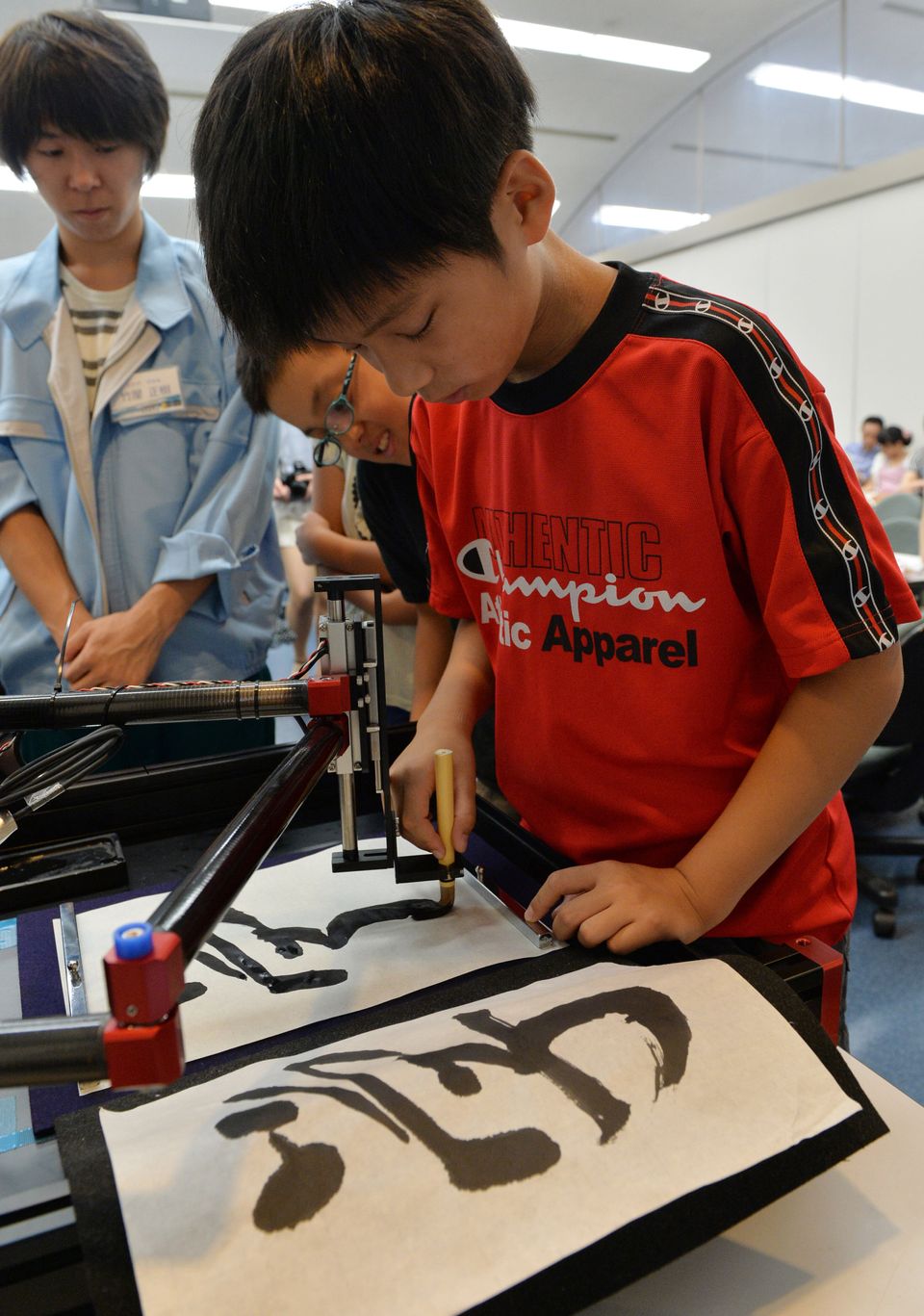