In 1957 Dr. Franklin E. Kameny was a well-respected astronomer working for the U.S. Army Map Service. Considered a brilliant student at Harvard University, where he earned his doctorate in astronomy, he was the right man at the right time. The Soviet Union had just launched Sputnik, the first man-made "moon" to orbit the Earth. The Space Race was on, and we were losing it. We needed men like Frank Kameny.

While U.S. scientists frantically tried to find out more about the Russian satellite, other government employees were busy investigating Frank Kameny. A background check turned up information that he might be gay. He was summoned to his supervisor's office.

"We have information you are a homosexual. Do you have any comment to make?" he was asked. Frank snapped that it was none of the government's business. Well, the government thought it was. In 1953 President Eisenhower had ordered the firing of any federal employee discovered to be gay. And just like that, Frank Kameny was out of work, joining a growing list of thousands and thousands of men and women who lost their jobs because they were gay or lesbian. 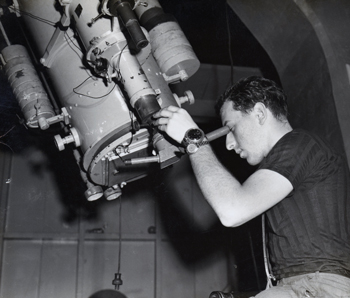 Frank Kameny as a college student. He had been fascinated by astronomy for as long as he could remember.

But then Frank did something that none of the other fired employees had ever done: He fought back.

He protested his firing to the Civil Service Commission and argued his case all the way to the Supreme Court. He lost at every turn. But Frank wasn't a man who would take "no" for an answer. (He could be so argumentative, it's been said, that he sometimes had trouble taking "yes" for an answer!). Over the next decade, he worked with scores of other LGBT employees who followed his lead and fought their dismissals in court.

Most were unsuccessful. But finally, in the early 1970s, two federal courts ruled that the government could not fire people simply because they were gay or lesbian, and the Civil Service Commission grudgingly amended its rules.

In an interview for the documentary film The Lavender Scare, Frank told me, "There was a press conference. They said they were changing the rules to suit my liking, and that settled the matter. They surrendered."

I asked him how he celebrated this victory, wich was almost two decades in the making. "You must have been elated," I said.

"Obviously I was satisfied, of course," he said. "But I don't have any particular recollection of my specific emotional feelings of that time." After all, he said, there were other battles to be waged. LGBT people were still barred from holding civilian jobs that required security clearance; it would be another 20 years before that ban was lifted. And then there was the military. Frank Kameny was there for those battles, too.

"I simply wasn't going to adjust myself to society," he said to me in the interview. "With considerable success, I have managed to adjust society to me. And society is much the better off for the adjustments I've administered."

Once again, Frank Kameny had been the right man at the right time.

For more about the film, visit thelavenderscare.com. Here's a trailer: