Fifty years ago this week, in 1961 Frank Kameny picked up his copy of The Washington Star and read the bad news in a one inch column: "Petition Denied". Kameny's petition for a hearing of his case before the U.S. Supreme Court had been denied. Kameny was fired from his job at the United States Army Map Service in 1957 when he was discovered to be homosexual. Unlike so many gay men and women who had been discovered and fired because of the U.S. government's ban on homosexual employment, Kameny fought.

Back then, no one noticed. But history's judgment is final: Kameny's powerfully argued petition to the Court marked day one in a revolution of legal argumentation and law for a vast homosexual minority demanding equal citizenship. Next month, Kameny's petition will go on public exhibition in the Jefferson Library of The Library of Congress.

"The Supreme Court denied (Kameny's) the petition and, as is customary, gave no reasons for the denial. Kameny's brief had fallen upon deaf ears. Yet the ideas in it were revolutionary and important. The brief was an announcement that the objects of the postwar antihomosexual Kulturkampf were insisting on equal citizenship, not just an easing of persecution", writes Yale University law professor William N. Eskridge, Jr.

Eight years before Stonewall, Kameny's petition laid out the argument for gay civil equality, not in the streets, but in the Declaration of Independence and the Constitution. He wrote the Court:

Not only are the government's present policies on homosexuality irrational in themselves, but they are unreasonable in that they are grossly inconsistent with the fundamental precepts upon which this government is based...we may commence with the Declaration of Independence, and its affirmation , as an "inalienable right" that of the "pursuit of happiness". Surely a most fundamental , unobjectionable, and unexceptionable element in human happiness is the right to bestow affection upon and to receive affection from whom one wishes. Yet, upon pain of severe penalty, the government itself would abridge this right for the homosexual.

(From Kameny's Petition for a Writ of Certiorari to the United States Supreme Court, January, 1961).

Kameny's petition, the first gay-related case ever brought to the Court, was discovered among thousands of documents in his attic in Washington, D.C. Next month, it will be exhibited at the Library of Congress as part of the exhibition, "Creating the United States". This is a breathtaking ascent for a long-forgotten document that gave legal and philosophical voice to the LGBT American contemporary struggle for civil equality. The "Creating the United States" exhibition at the Library is about the founding documents themselves, The Declaration of Independence, the Constitution and the Bill of Rights---and how "they are living instruments that are central to the evolution of the United States", according to the Library's description of the exhibit.

"Creating the United States" shows how the vision and protections of America's founding documents have steadily been extended to ever more Americans in an "arduous journey". This petition to the Court, so long denied, will be taking its place among the epic stories of that journey from abolition, to women's suffrage to Frank Kameny's "pursuit of happiness". 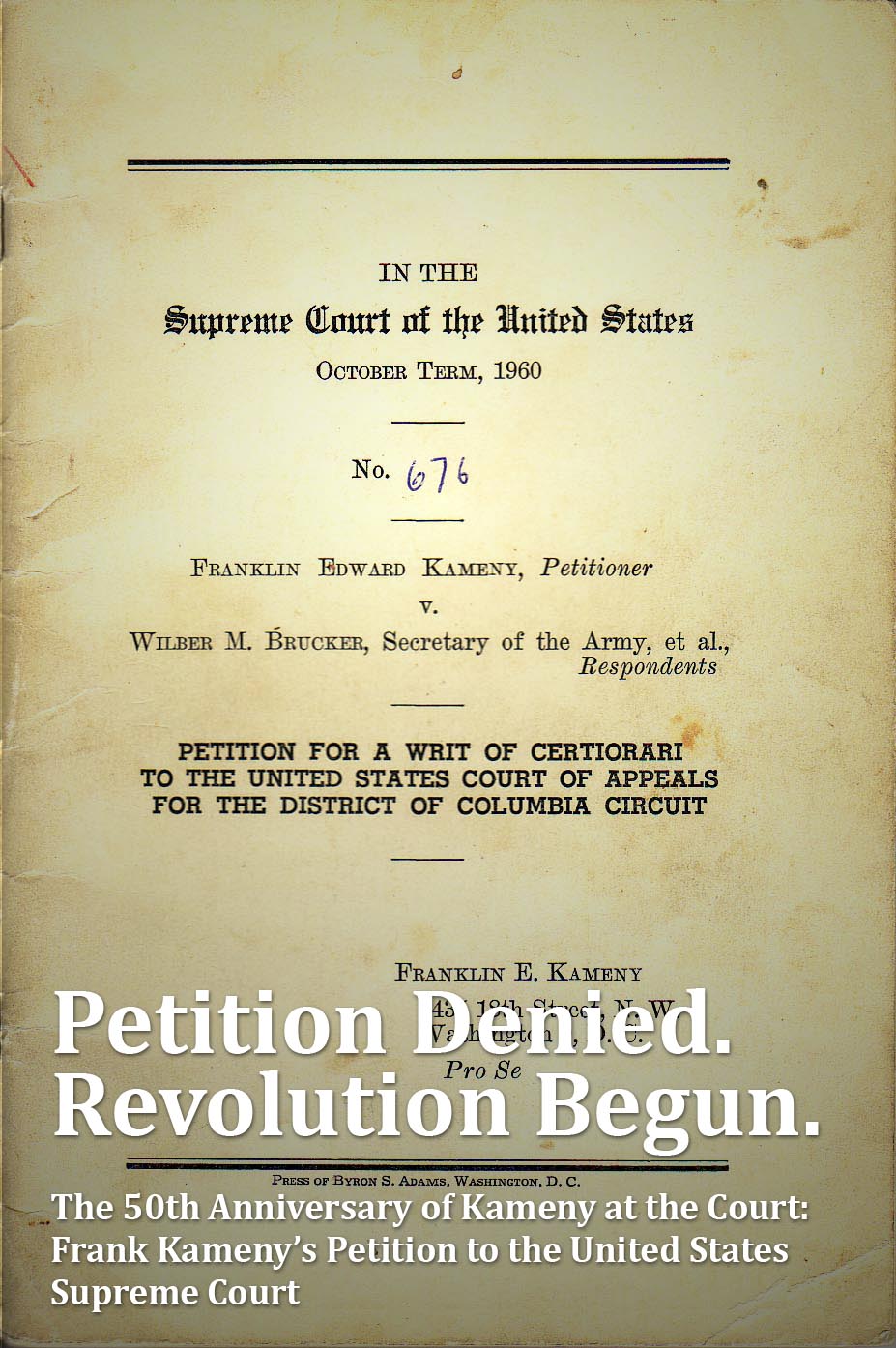 Kameny's 1961 Petition to the U.S. Supreme Court may now be purchased as a Kindle eBook for $ 9.95, proceeds to benefit Frank Kameny.