Although his expansive, organic Prairie-style mansions may be the most memorable landmarks of Frank Lloyd Wright's seven decade career, the architect was focused on making artfully-constructed homes available to moderate- and low-income families.

"I would rather solve the small house problem than build anything else I can think of..." he wrote in the January 1938 issue of Architectural Forum.

In 1901, Wright outlined his vision for affordable housing in a speech called "The Art and Craft of the Machine," calling for a standardized system of off-site preparation and on-site assembly. Later dubbed "American System-Built Homes," Wright produced more than 900 working drawings and sketches of various designs for the system between 1915 and 1917.

Wright's system didn't call for complete prefabrication, but sought to reduce the cost of construction by minimizing the time skilled craftsmen spent working on-site. Cutting lumber and other materials to size in a mill or factory construction workers' assembly time and costs, and reduced material waste.

Six examples were constructed on W. Burnham St. and Layton Blvd. in Milwaukee, Wis., where they are still standing. And, as of late September, the three bedroom house at 2722 W. Burnham is on the market.

Frank Lloyd Wright himself signed the building permit in 1916 on the single-family home, which has eight rooms including two and a half bathrooms, and retains detailing original to the house and emblematic of Wright's Prairie style aesthetic. Leaded glass skylights, tray ceilings, low, horizontal lines and built-in bookcases and armoires that often appear in Wright's Prairie School designs have been preserved.

See photos of the historic Frank Lloyd Wright house now on the market: 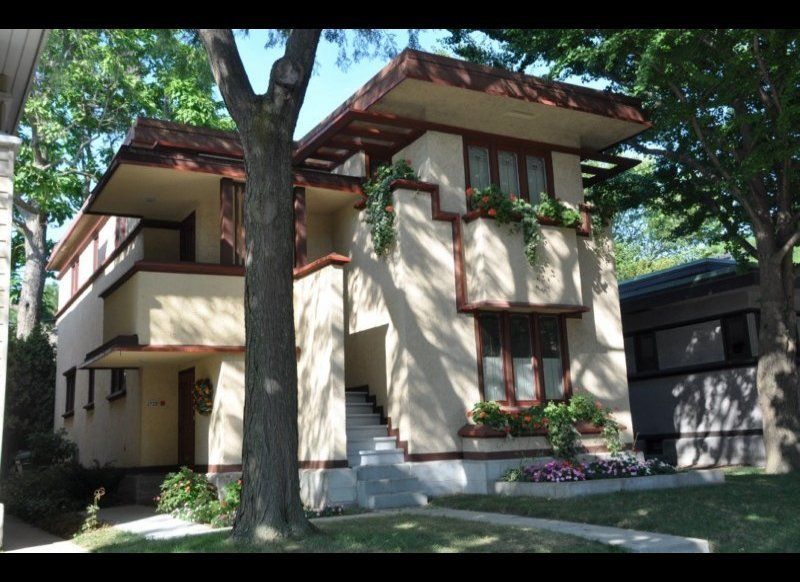 1 / 11
Prairie Style Home Exterior
The home is one of six Frank Lloyd Wright built side by side on Milwaukee's south side.
Shorewest Realtors