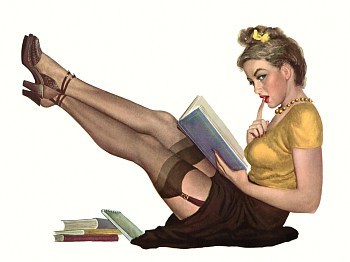 Nor were the things I created out of my silly little mind while working for Larry Flynt, slaving away over a hot keyboard clad only in a vintage silk slip and a light floral perfume as I waited for my petite, punky girlfriend to come over so we could order a large sausage....pizza. You know, for research.

Memoirs which nowadays clutter bookstore shelves have become the hot new literary commodity, shoving fiction to the floor with a hard thud. Readers want the guilty joy of knowing what they are reading happened in real life. Just like those Penthouse Forum letters. Ah, the schadenfreude of lust and remorse. And more than a few of those, like A Million Little Pieces and Love and Consequences, pack as much veracity as my 2,500 word feature for Larry Flynt about women who think hand guns are sexy...very...very...sexy.

Which brings me to Frank Marshall Davis, the bohemian author who was introduced to Barack Obama in Hawaii by the then-ten year old Barack's grandparents. Davis, who had risen to prominence as a poet and journalist during the Depression and the Second World War, was lauded by many readers. But by the late 1940s and early 1950s he was also the target of careful scrutiny by the Federal Bureau of Investigation and the House Un-American Activities Committee.

Born in 1905, Davis worked as a journalist for a number of newspapers, eventually becoming as the executive editor for the American Negro Press, as well as publishing several books of poetry. He was close friends with Paul Robeson, the actor/singer/activist, and like many intelligensia, affected and influenced by Communism which at that time held the vibe of being some ideal oasis of Utopian civilization, seemingly free of racism, which made it even more alluring to Robeson and Davis.

After moving to Hawaii in 1948, Davis continued to work as a journalist, penning a weekly column for the Honolulu Record, published by the International Longshore and Warehouse Union. In 1950 the House Un-American Activities Committee accused Davis of involvement in several communist-front organizations.

In Hawaii, Davis concentrated on writing for the Record until it closed in 1958, while running a small paper company and raising his five children with his wife Helen, a Chicago socialite whom he had married in 1946. No doubt Obama's grandfather saw Davis' biracial children as peers for "Barry" as he was known then, and Davis himself as a potential role model.

Davis had published little poetry between 1948 and his final volume, Awakening, and Other Poems in 1978, but there was a revival of interest in his work during the Blacks Arts Movement of the 1960s. His porn book Sex Rebel: Black was published in 1968 by Greenleaf Classics, a busy smut-house which churned out stroke books at a steady pace; and while Sex Rebel: Black might be a 100% died in the wool truthful autobiography, it may also very well be that the pseudonym, Bob Greene, took over Frank Davis Marshall, allowing him -- to lesser extent than Linda Albert writing as JT LeRoy -- to express things otherwise left unsaid.

In Sur les Toits de Paris (aka Opus Pistorum) Miller describes in graphic first person detail sex with a midget and a black mass (the latter liberally lifted from Huysman's La Bas) Were those stories "real"? Well Miller did live in Paris...

To reference Miller again, his Tropic of Cancer was certainly pornoliciously autobiographical-or at least written in the first person, a standard literary device-and was banned in the United States for its adult language and situations. But how truthful, or rather factual, is that literary classic? We shan't ever really know, in the same way to speculate how much fact or fantasy went into Davis' Sex Rebel: Black is purely that-speculation.

In a surviving portion of his autobiographical manuscript, The Incredible Waikiki Jungle, discovered posthumously, Davis confirmed that he was the author of Sex Rebel: Black after an astute reader/fanboy noticed the "similarities in style and phraseology" between the pornographic work and his poetry.

"I could not then truthfully deny that this book, which came out in 1968 as a Greenleaf Classic, was mine," Davis wrote. In the introduction to Sex Rebel: Black, Davis (writing as Greene) explains that although he has "changed names and identities... all incidents I have described have been taken from actual experiences."

Well, of course. "Taken from actual experiences." Just like I am lying here on a lavender brocade duvet, clad only in black La Perla bra and panties. The cool breeze tantalizing me, I await the sound of the your key in front door, the firm stride of your long legs as you walk into the bedroom, unbuckling your belt...