Ghosts of DC took a little trip to the Bay Area this weekend and we
wanted to sprinkle a little San Francisco flavor into this next post.
We can think of no better subject than Alcatraz (aka, The Rock). 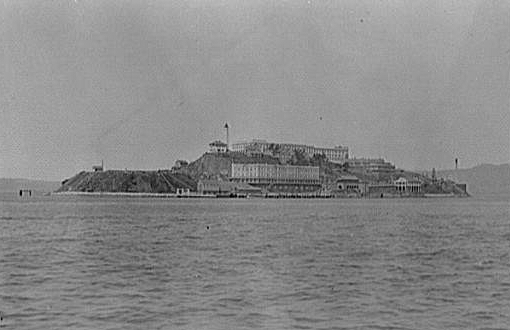 Alcatraz from the water

A brief history of the island... It started out as the site
for a lighthouse until President Millard Fillmore ordered it to be
used as a military base in 1850, following the Mexican-American war.
It continued to serve in a military capacity through the href="http://ghostsofdc.org/tag/the-civil-war/">Civil War and, in
addition, began housing Confederate prisoners of war.

It was used primarily as a military prison until, in 1933, the href="http://ghostsofdc.org/tag/department-of-justice/">Department of
Justice acquired the island for use as a maximum security prison
for the worst of the worst felons. The following year, 137 prisoners
were transported from Fort Leavenworth, Kansas and Alcatraz began
it’s service as part of the Federal Bureau of Prisons system. It
remained part of the system until Attorney General Robert F. Kennedy
ordered in closed in 1963.

Prisoner #AZ1441, Frank L. Morris, arrived at Alcatraz on January
3, 1960 (the day after href="http://ghostsofdc.org/tag/john-f-kennedy/">JFK announced his
candidacy for president). Morris was a professional inmate, having
lived a life behind bars for the better part of his life. His criminal
life began at the early age of 13.

Morris was born on September 1, 1926 at href="http://ghostsofdc.org/tag/gallinger-hospital/">Gallinger
Hospital in Washington, D.C. (more recently known as D.C. General
Hospital near RFK
Stadium – and closed in 2001). Not much of his youth is
documented, but according to FBI documents, he was orphaned at the age
of 11 and sent to live in foster homes.

A couple of years later, on November 13, 1940, he was convicted
of theft and sentenced to the href="http://ghostsofdc.org/tag/national-training-school-for-boys/">National
Training School for Boys, a reform school in northeast D.C., where
he was taught to repair shoes. The sentence was originally six years, nine
months and 18 days, however, he was paroled in less than a year.

Freedom did not last long for Frank as he violated it within a year
and was back in reform school at Chillicothe, Ohio in 1943. In 1945,
he was returned to D.C., as an inmate in the National Training School
for Boys. Side note: in 1951, Charles Manson was an inmate at the
school.

On June 13, 1952, he was sentenced to serve 10 years at the
Louisiana State Penitentiary for possession of narcotics and armed
robbery.

Clearly Frank was ensconced in a life of crime and we don’t
need to run through his entire rap sheet. Just check it out below... and by the way, did you know rap sheet is an acronym for
record of arrest and prosecution? I did not.

After this long list of offenses, he is locked up as prisoner
#AZ1441 at Alcatraz. After a number of successful escape attempts from
other prisons under his belt, he begins to hatch an escape plan from
The Rock.

Of course, nobody has ever successfully escaped from this prison.
Prior to his attempt, href="http://en.wikipedia.org/wiki/List_of_Alcatraz_escape_attempts"
target="_blank">only 12 had been made, involving 31 inmates, all
of whom were captured or died trying (one escape in 1937 lists two
inmates as never being recovered, but presumed dead).

The plan involved the men chiseling through the walls in their
cells over the course of a year, until the hole they created was large
enough to crawl through. By May 1962, the holes were complete.

Three of the men were able to crawl through into an unused service
corridor behind the wall. Unfortunately for West, the vent covering
his hole was stuck and he was unable to get out, so Morris and the
Anglins left him. 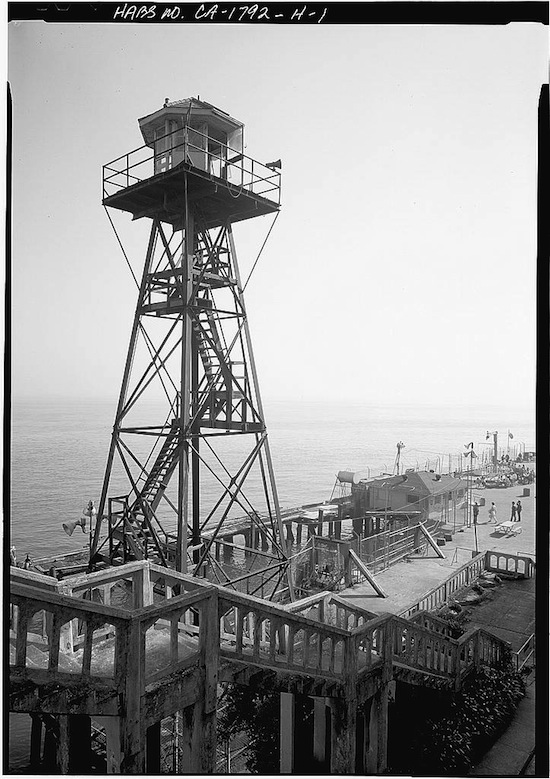 As part of their plan, each of the men had fashioned dummy heads
out of plaster, toilet paper and hair from the prison barber shop. The
heads were placed in their beds so the guards would think the inmates
were still asleep.

Last, a crude raft was fashioned out of rubber raincoats and
plastic bags. What happened next was nothing short of amazing.

prison guard inspects the hole into the service corridor

The men crept through the unused corridor, up a shaft of pipes to
the roof and across the roof, in plain site of the guard tower with
their makeshift gear in tow. Somehow, they were able to shimmy down a
50-foot kitchen pipe affixed to the wall, while the wall was
illuminated sporadically with a search light, yet they remained
undetected (someone in the guard house taking a little snoozer?).

They continued, climbing two successive 12-foot, barbed-wire fences
and headed for the island’s northeast shore to inflate the raft.
By 10 p.m. that evening, they had set off into the dense fog covering
the bay. They were never seen or heard from again.

The following day, a search party found the remains of the raincoat
raft on Angel Island, two miles north of Alcatraz. Along with the raft
was discovered a small plastic bag containing the personal effects of
the Anglins.

To further add to the mystery, footsteps were seen heading away
from the raft on the beach.

In 1979, the three were declared legally dead and the FBI closed
the case. The case was transferred over to the United States Marshals
Service and, in 1993, it was reopened. The official position of the
marshals service is that the inmates likely drowned in their attempt,
however, their spokesman, Dave Branham was quoted as saying, “we
think there is a possibility they are alive.”

The legend of this escape lives on today, 50 years later. Most
people believe that the men died in their escape, but a number of
people believe they made it. This is a tale, much like that of D.B.
Cooper, which will likely remain unsolved.

A warrant still exists for Frank, John and Clarence. If they are
still alive, they will be happy to know that those warrants will
expire when each hits their 100th birthday.

One last thing. A hit movie was made in 1979, based on this story.
The cast was led by GOP convention speaker, Clint Eastwood as D.C. boy
and prisoner #AZ1441, Frank Morris. Check out the trailer below.