“The first thing you notice about New Orleans are the burying grounds," Bob Dylan wrote in the first volume of his memoir. "The cemeteries -- and they're a cold proposition, one of the best things there are here. Going by, you try to be as quiet as possible, better to let them sleep. Greek, Roman, sepulchres -- palatial mausoleums made to order, phantomesque, signs and symbols of hidden decay -- ghosts of women and men who have sinned and who've died and are now living in tombs. The past doesn't pass away so quickly here."

The great musician could just as easily be describing a different type of Louisiana tomb. One that houses the living rather than the dead, but itself becomes vulnerable to the city's beautiful and tragic decay. Because just as the sublime burial grounds keep the past lingering in the present, the remains of New Orleans' great homes preserve the architectural ghosts that make the Big Easy so mythic. 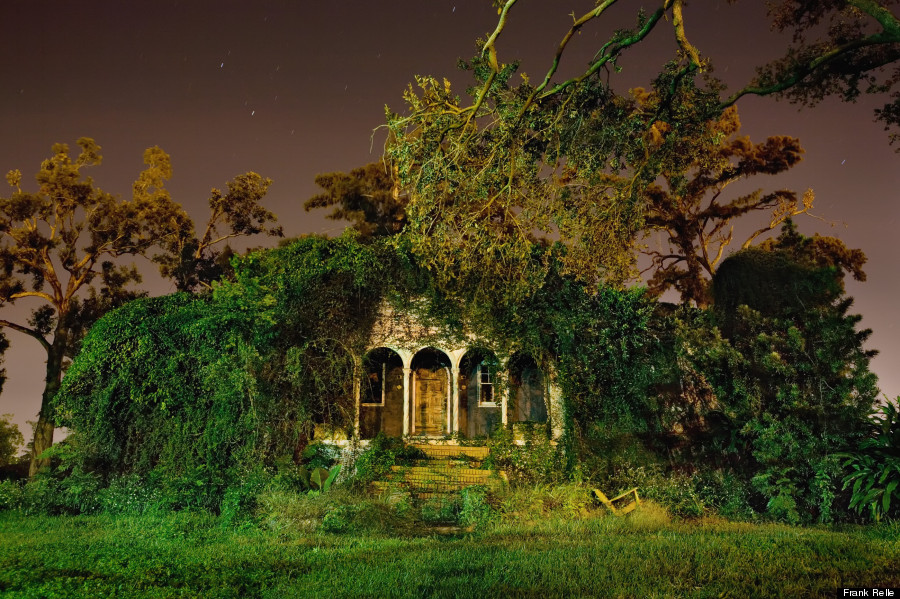 Photographer Frank Relle understands this more than most, evidenced by his stunning photography project, "Nightscapes." Born and bred just outside of New Orleans, Relle began capturing illuminated portraits of mansions and row houses a year and a half before Hurricane Katrina hit the Gulf of Mexico. His scenes of eerie, sometimes vacant and decrepit residences document the time before and after the devastating storm wreaked havoc on the Southeast.

“I walked the streets of New Orleans since I was a kid," Relle writes in his artist statement. "She talked to me on the corner and at the checkout counter. I danced with her down the middle of the street. Her food stimulated and comforted me. I got scared and left her because she lacked mountains and clear water. She lured me back with something I can’t describe. She has been my greatest teacher and my longest lasting lover. The photographs I make are evidence of our all night conversations.”

To create the mysteriously lit photos, Relle channels his inner magician, using a combination of high-pressure sodium, mercury vapor and daylight-balanced hot lights. "Lights are mounted on stands two to three stories high and are powered by marine batteries and an inverter," he explained to HuffPost. "Shooting long exposures and using these multiple lighting sources creates the distinct color combinations and a sense of stillness with moving elements." Sometimes, this takes six hours to capture and, as Relle pointed out, involves a police detail to block the street and answer nosey neighbors' questions about the alien-like settings.

Scroll through a preview of Relle's work below and let us know your thoughts on the series in the comments.