Celebrity plastic surgeon Dr. Frank Ryan, perhaps best known for performing ten procedures on Heidi Montag, was killed in a car crash earlier this week when his Jeep plunged over the side of the Pacific Coast Highway.

Ryan's ex-girlfriend Charmaine Blake has offered new insight into what caused the crash, telling People that the doctor was "sending a Twitter message about his border collie just before his fatal car accident." (see his final tweet below) The dog was in the car with Ryan during the crash and survived the accident.

California Highway Patrol confirmed that Ryan had been texting prior to the fatal accident.

"He lived up in Malibu on a tiny street and he was texting while driving and he accidentally went over the cliff," Blake told People.

Celebrities including Kim Kardashian and Oprah Winfrey have previously spoken out against texting while driving. Earlier this year, Oprah wrote an op-ed in the New York Times, "Dnt Txt n Drv," and launched a "No Phone Zone" pledge website to discourage people from distracted driving.

A recent Pew study found that "47 percent of adults who text reported sending or reading texts while behind the wheel." See how texting while driving laws vary by state here. 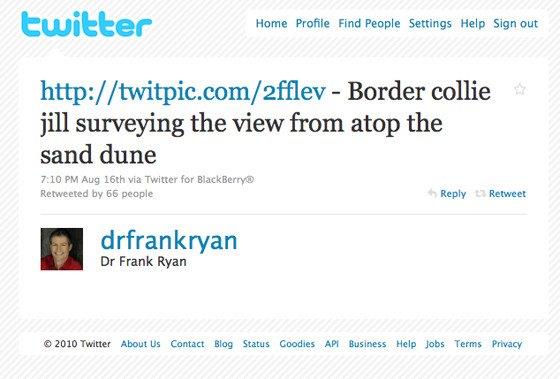